End of AIDS pandemic in sight: US expert 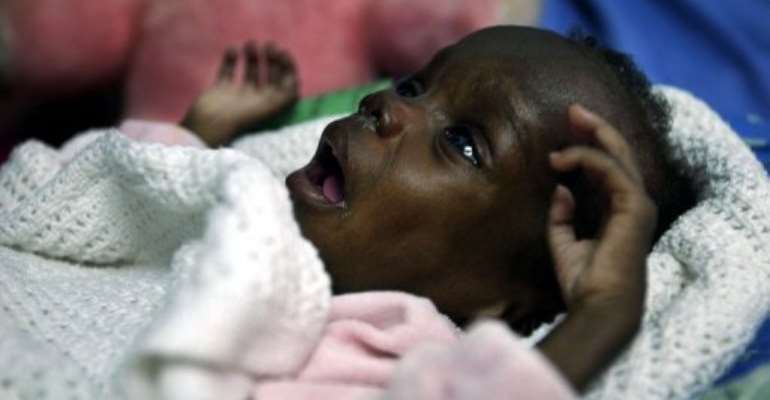 A Ugandan infant named Sonia receives treatment for HIV contracted through her mother in 2003. By Marco Longari (AFP/File)

WASHINGTON (AFP) - Three decades into the AIDS pandemic an end to new infections is in sight, according to Anthony Fauci, director of the US National Institute of Allergy and Infectious Diseases.

"We don't even know if a cure is possible. What we know is it is possible that we can end this pandemic even without a cure," Fauci told AFP in an interview ahead of the International AIDS conference July 22-27 in the US capital.

Some 34 million people around the world are living with human immunodeficiency virus, which has killed 25 million since it first emerged in the 1980s.

The theme of this conference, held every two years, is "Turning the Tide Together," and is based on experts sharing knowledge of the latest advances and how to best implement them in order to halt new cases of HIV/AIDS.

"We have good and effective treatments but we have to keep people on the treatments indefinitely in order to keep them well," said Fauci, referring to antiretroviral drugs which have transformed a deadly disease into a manageable condition.

"When you have a very marked diminution of the number of new infections then you reach what we call and AIDS-free generation."

Fauci said he did not expect any staggering breakthroughs to be announced at the conference, but that the gain would come though collaborating on ideas to speed progress by using the tools that practitioners have already at hand.

Otherwise, if progress continues at the present rate of reducing new infections worldwide by about 1.5 percent per year, the goal becomes too distant, he said.

Recent studies that tested antiretroviral drugs in healthy people as a way to prevent getting HIV through sex with infected partners have shown some promise, though getting people to take their medication daily had proven a challenge.

"The important thing is you have to take your medication," Fauci said, noting that average HIV risk reduction in a study of men who have sex with men was just 44 percent.

The approach of treating healthy people with antiretrovirals is known as pre-exposure prophylaxis, and "is not for everyone," Fauci said. "We have to selectively use it."

The US Food and Drug Administration on Monday approved the first pill for HIV prevention, Truvada, despite concerns by some in the health care community that it could encourage drug resistance and risky sex.

Novel ways to boost testing are also good news, particularly with the recent US approval of the first at-home HIV test.

"It is so important in the quest to ending the AIDS pandemic to get as many people tested as possible. You can link them to care and get them on treatment. Anything that makes that goal easier would be an important advance."

As far as an AIDS vaccine, Fauci said researchers have made "good progress" but "still have a long way to go."

Experts are examining a trial done in Thailand that showed in 2009 modest efficacy of just over 30 percent, but is still considered a breakthrough and offers clues for future study into why some were helped and others were not.

Fauci also said he did not expect much concern to be raised over upcoming reports of the extent of drug resistance to antiretrovirals.

"People may think I am taking it lightly but quite frankly it is not a serious problem," Fauci said.

He added that overall, AIDS research is "going well" even though "funding is restricted right now."

And he expressed pride in the United States' President's Emergency Plan for AIDS Relief (PEPFAR), "which has really transformed how you can get people in low income countries to get on treatment care and prevention."

The United States provides almost half the world's funding for international HIV assistance, according to UNAIDS.

The International AIDS Conference is returning to the United States after more than two decades away due to a ban on travel and immigration by people with HIV that was lifted in 2008 and signed into law in 2009.