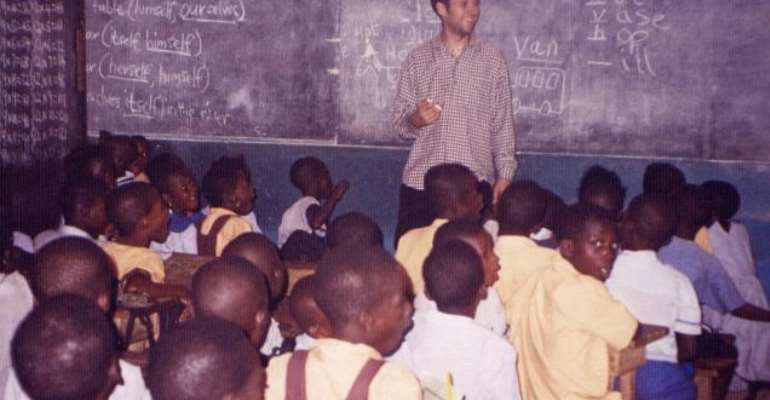 Kongo(U/E) , July 17, GNA - Parents in Mining Communities in the Upper East Region have been called upon to ensure that their children remain in school instead of allowing them to stray in the mining areas.

Monsignor Thomas Anamooh, a former Administrator of the Navrongo Bolgatanga Diocese of the Catholic Church, said this at a mini durbar at Kongo to honour Reverend Brother Francis Sebo, a Liberian, who had been providing support to deprived school children in the Region since 1998.

He regretted that school children in the area had been abandoning school which was the pivot to development and yet many parents were doing nothing about it.

He called on parents to live up to their responsibility by providing all the necessary needs of their children so as to prevent them from dropping out of school and attending to small scale mining.

Spaat-Naab, David Namal-Teng, Chief of Kongo, expressed his gratefulness to Reverend Brother Sebo saying government alone was not capable of handling the needs of education.

He said the spate of small scale mining activities in the area kept increasing and that he had recently attended a workshop on mining where he realised the health hazards associated to mining.

“I am going to hold a meeting with my subjects and measures will be put in place to stop mining in my traditional area. The health hazards may not be felt now but in future and we are alarmed about the possible effects”.

He stated that currently human beings and animals in the area were drinking from the same source of water that has been polluted by chemicals used by mining operators.

He said apart from the funds most parents were given goats to rear and to take care of their children and the entire family. The Kongo Catholic Church Choir had also benefited enormously from the fund.

Mr Michael Zuri, one of the beneficiaries of Reverend Brother Sebo's fund, commended him for the support he had been giving to the community and presented him with a portrait of the last supper of Jesus Christ and a silver cup carved from an olive tree in Israel.

A Foundation dubbed, “Nick Sebo Foundation”, was launched to complement and sustain the efforts of Rev Sebo and all stakeholders would be encouraged to contribute to the foundation.

Launching the Foundation at a mini community durbar at Kongo, one of the products of Reverend Brother Sebo, Mr Raymond Ayine who now holds a Masters Degree in Communication Studies from the University of Ghana, and working with Afrikids Ghana, an NGO, appealed to traditional authorities, the leaderships of the church and benevolent people to contribute to the Foundation's fund.

We’re passing a law to nib LGBTQI+ activities in the bud — B...
35 minutes ago