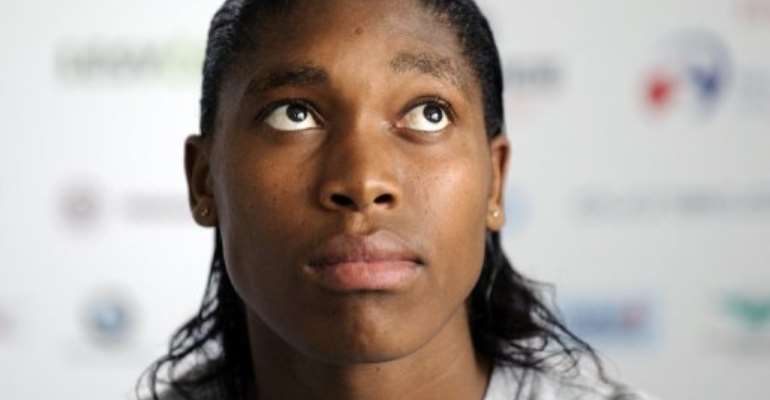 JOHANNESBURG (AFP) - South African Caster Semenya will draw inspiration from Nelson Mandela and Maria Mutola as she seeks to reclaim her 800-metre golden girl crown at the Olympics.

It was political icon Mandela who stood by the 21-year-old during her darkest days after winning the 2009 world title as rivals questioned her gender while her only 'fault' was having three times the testosterone of an average female.

And to 2000 Sydney Olympics 800m champion Mutola from Mozambique fell the task of rekindling the spirits of a shy woman born in a north-eastern South African village who began running to train for football.

The sporting tale of Mokgadi Caster Semenya is one of triumph, humiliation and a resilience she hopes will reach a climax on August 11 with a gold medal after the 800m final.

World athletics body IAAF took notice of previously unknown Semenya when she clipped almost eight seconds off her 800m time during 2009 and destroyed a star-studded field in Berlin to win the world title.

Drug tests were followed by gender tests and the situation spiralled out of control with Caster complaining of "unwarranted and invasive scrutiny of the most intimate and private details of my being".

She was barred from the track for almost a year before being cleared to run again and her comeback was hampered by a lower back injury and a growing belief that coach Michael Seme had taken her as far as he could.

"If I win gold, I will dedicate it to Nelson Mandela. He is a hero in South Africa and everything I do, I do for him," media-shy Semenya said during a rare interview.

"He motivated me during the dark days after my world title victory, made me believe in what I do best and that I could win more medals. Without his support, maybe I would not be where I am today."

If Mandela, the dashing lawyer who spent 27 years in jail for opposing apartheid before becoming the first leader of a non-racial South Africa, inspires Semenya, Mutola is the force driving her onwards and upwards.

The 39-year-old replacement for Seme had to compete in four Olympics before achieving her golden moment, and she is adamant Caster can climb to the middle of the podium much quicker.

"I believe she is far ahead of me as she clocked one minute 55.45 seconds at 18. At that age I had not managed to break two minutes," noted multiple world title winner Mutola.

"Had it not been for the issues that prevented her from running for some time after her Berlin triumph, Caster could have lowered her time to one minute, 51 or 52 seconds by now.

"Caster holds the key to her future. She must motivate herself, believe in herself. I sense that everything is falling into place and the perfect ending would be for her to win gold at her first Olympics."

The South African public and media consider Semenya the best medal bet among their athletes, although a glance at 800m times this year suggests the 2011 world championships silver medalist faces strong opposition in London.

You have to scroll past 39 times before reaching the best in 2012 by Semenya -- 1:59.18 -- and 2008 Olympic gold medalist Pamela Jelimo of Kenya has clocked five faster times and reigning world champion Mariya Savinova of Russia three.

Leading South African athletics writer David Isaacson believes Semenya can strike gold if she equals or betters the 1:55.45 that brought glory in Berlin three years ago.

"Our best bet is probably Semenya," wrote Isaacson in The Sunday Times, "but the women's 800m is shaping up as a toughly contested event. Savinova beat her at the last world championships and Jelimo seems to be on her way."

Jelimo and Semenya clashed late May in Czech city Ostrava and the Kenyan emerged a comfortable winner in 1:58.49 with Semenya second in 2:00.80 after leaving her push for the line too late.

Among the spectators that evening was Jarmila Kratochvilova, whose 800m world record time of 1:53.28 set in German city Munich 29 years ago still stands with Mutola believing Jelimo and Semenya are among those capable of smashing it.

"You need a perfect race with the perfect people in it. I'm sure people will come out to motivate each other ... Jelimo is running well and so is Caster," said the Mozambican.