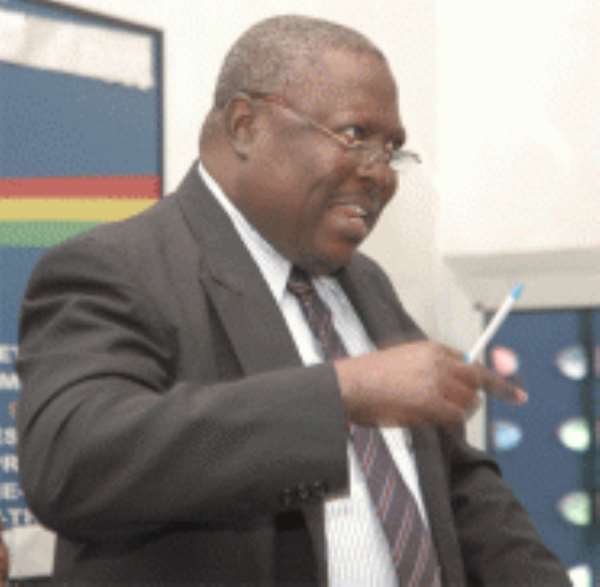 In a letter dated July 9, 2012 and addressed to the Auditor-General, Mr Amidu said he had proof that on September 22, 2011, Mr Barton-Odro signed letter No. D45/SF59/08 to the Minister of Finance and Economic Planning in the matter of the AAL, purportedly on behalf of the Attorney-General and Minister of Justice, directing the Minister of Finance to “authorise the payment of GH¢4,159,010.38 to the plaintiff”.

Mr Amidu’s latest epistle was copied to the Chairman of the Public Accounts Committee (PAC) of Parliament, the Controller and Accountant-General and the Minister of Finance and Economic Planning.

He said in October 2011, he again received persistent information that the Solicitor-General facilitated the Deputy Attorney-General to sign and dispatch letters to the Minister of Finance and Economic Planning anytime he (Amidu) travelled on official assignments or out of the office for a few days, to pay settlement or judgement debts from government accounts.

He said his informants thought he would not have approved the letters if they were brought to his attention, adding that none of the informants could produce a copy of the alleged letters, arguing that they were being closely guarded.

“Consequently, I directed the chief director (who issued out a circular) to bring to me the float from all the sectors under the Attorney-General’s Department for the month of September 2011. I read the float from the Solicitor-General’s office but there was no letter that had been signed in my name and on my behalf to the Minister of Finance and Economic Planning by the Deputy Attorney-General for the payment of any debts as I had been informed,” he said.

Mr Amidu said his informants, who were very senior and responsible attorneys and who understood the unconstitutionality of such actions, persisted in their insistence that they were not making mere allegations.

He said it was in vindication of the integrity of his informants that the letter under reference had just been delivered to him, long after he had left office, and that “my informants still insist that other such unconstitutional authorisations which were done without my knowledge and authorisation as Attorney-General exist and may have been acted upon by the Minister of Finance and Economic Planning”.

Mr Amidu said he took over as Attorney-General from January 21, 2011 to the evening of January 19, 2012 and that he never authorised Mr Barton-Odro to sign the September 22, 2011 letter on his behalf.

He said Mr Barton-Odro had no constitutional authority to have signed the letter on his behalf.

“A photocopy of the said letter also evidencing the date of its dispatch on September 23, 2011 is annexed herewith for your ease of reference. You would notice that for some reason the letter is not copied to me or brought up to me as the Attorney-General for final disposal instructions, as is normal practice in the public service,” the letter said.

He said the purpose of writing the letter to the Auditor-General was to alert him, in view of the proof now proffered by his informants by the letter under reference, to examine critically and painstakingly all letters written from the Attorney-General’s Department between January 21, 2011 and January 19, 2012 for the payment of settlement or judgement debts from government accounts to ensure that they were signed by him (Amidu) personally as the Attorney-General or upon his expressed written authority to the officer purportedly signing on his behalf.

Mr Amidu said letters that did not comply with the above were “prima facie unconstitutional and void which you are obliged to state in your report for the year 2011 and name the officer giving the unconstitutional approval for payment”.

“I am by copies of this letter bringing the foregoing to the attention of the PAC of Parliament, the Attorney-General, the Controller and Accountant-General and the Minister of Finance and Economic Planning because I cannot take professional responsibility for acts of subordinate officers during my tenure who deliberately and knowingly violated Article 88 of the Constitution,” it summed up.

When reached for his reaction, Mr Barton-Odro said he would not respond publicly to the issue but respond to the statement put out by Mr Amidu at the appropriate quarters.