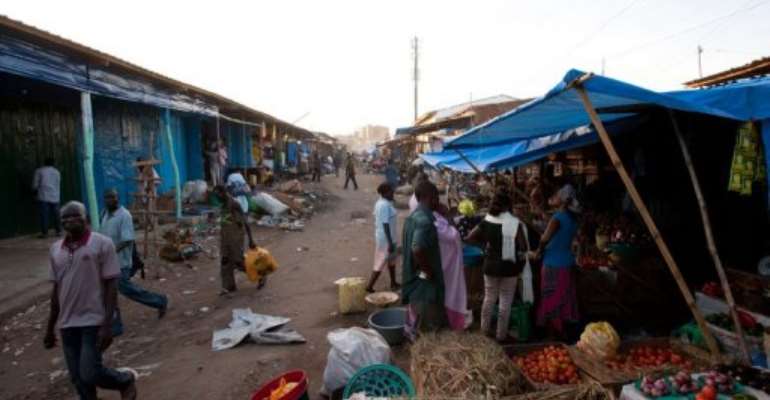 Customers and vendors talk at a market, in Juba, South Sudan, in May. By Giulio Petrocco (AFP/File)

JUBA (AFP) - An activist in graft-riddled South Sudan was abducted outside his home, bound and badly beaten in a three-day ordeal after calling for corrupt officials to be named, he told AFP Thursday.

Deng Athuai, head of the South Sudan Civil Society group, led a campaign to uncover the names of 75 former and current officials accused by President Salva Kiir of stealing $4 billion from the grossly impoverished nation.

"I found myself tied down on a big chair in a dark room," Athui said, describing the questioning after he was grabbed from near his home in the capital Juba on July 4. The attackers bound him and put a bag over his head.

"They were saying: 'Tell us who is paying you and telling you to come and cause a crisis in this country,'" he added.

The missing $4 billion amounts to around a third of government income since 2005, coming almost entirely from the South's oil revenues, according to London-based rights group Global Witness.

Athui survived only after refusing to hide from passing soldiers as his attackers marched him through a forest.

"They told me to lie down as the military was coming and I refused so they ran away -- they took me to that forest and I don't know if they meant to kill me," he said.

He was eventually taken to hospital after making it to the roadside -- beaten, bound, gagged and with the bag on his head.

But threats on colleagues have not stopped.

"These people, they send them text messages telling them not to stand with me," Athui added.

"They say: 'When you talk more, you'll be following your chairperson -- but won't get away,'" he said.

Dana Wilkins of Global Witness said Juba must bring to justice those responsible for the attack.

"When civil society's freedom to operate is threatened, all efforts to fight corruption and impunity are threatened," Wilkins said in a statement.

"The South Sudanese government has promised its citizens an open and democratic society. It must now make good on that promise by bringing Deng Athuai's attackers to justice."

South Sudan Interior Minister Alison Monani Magaya said police were investigating, although he did not believe the attack was politically motivated.

"We suspect that these acts were carried out by some gangs... We don't understand why this is happening, we do not expect people to be intimidated for their views," he said.

Rampant corruption is seen as key problem for the fledgling nation, the world's newest after splitting from foes Sudan last year, and Athui said he would continue his campaign.

"I will not give up," he said. "This corruption and these people, if we give them space there will be no future for this country."