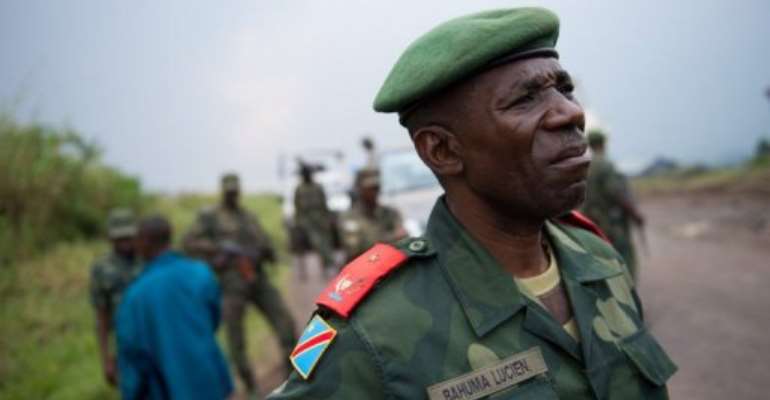 Officials from the UN and the army told AFP today that attacks are rebel positions are under way. By Phil Moore (AFP)

GOMA, DR Congo (AFP) - Congolese mutineers said Thursday they had no plans to attack the eastern Democratic Republic of Congo city of Goma as UN and government troops bombarded rebel positions in the country's strife-torn eastern region of Nord-Kivu, according to an AFP journalist.

The M23 mutineers, who defected from the army in April, seized several towns in the eastern DR Congo in recent days, forcing troops and civilians over the Ugandan border and prompting fears of an attack on Goma.

"Our mission is not to go to Goma. We are strong but we are also disciplined," M23 spokesman Vianney Kazarama said.

Three helicopters belonging to the UN mission in DR Congo, Monusco, and two gunships of the DR Congo army (FARDC) were seen and explosions were heard around the towns of Nkokwe and Bukima, where rebels from the M23 group are thought to have some positions. Officials from the UN and the army confirmed to AFP that attacks were under way.

The UN stationed tanks around Goma on Wednesday and UN chief Ban Ki-moon urged the presidents of DR Congo and Rwanda to "defuse tensions" over the rebellion in the resource-rich but war-plagued central African nation.

The mutineers had seized a number of towns along the Ugandan border, including Rutshuru, before withdrawing over the weekend from all but Bunagana, a town on the border with Uganda.

M23 -- named after a failed 2009 peace deal signed on March 23 -- is led by Bosco Ntaganda, a man nicknamed the "Terminator" who is wanted for war crimes by the International Criminal Court.

About a dozen UN tanks were stationed around 25 kilometres (15 miles) north of Goma, which lies on Lake Kivu on the border with Rwanda, on a road linking the city to Rutshuru which the mutineers seized briefly at the weekend.

At least two Congolese army tanks were also seen on the road, an AFP photographer reported.

Goma was calm on Thursday morning, with no sign of panic among residents.

"We have pulled out of those towns (we had captured), our mission is not to control them. What we want is that the Congolese government sit down at the negotiating table," Kazarama said.

The mutineers are ex-rebels who were integrated into the regular army in 2009 as part of a deal that followed their failed 2008 offensive on Goma, under the command of Tutsi leader Laurent Nkunda.

They defected in April, ostensibly over pay, but experts argue Ntaganda and his men are flexing military muscle to clinch further rights over the area's lucrative mines.

Almost uninterrupted conflict over DR Congo's vast mineral resources -- which include gold, diamonds, coltan, tin, tungsten and many others -- has left at least two million people dead since 1999, according to rights groups.

A diplomat in Kinshasa said an M23 offensive on Goma appeared unlikely.

"Everything in the way that the mutineers have withdrawn from Rutshuru indicates that they don't intend to take big towns like Goma," the diplomat said on condition of anonymity.

The DR Congo government and a UN panel of sanctions experts have said Rwanda is supplying arms and fighters to M23 rebels. Rwanda has denied involvement.

Ban "expressed grave concern" over reports that the M23 "are receiving external support and are well-trained, armed and equipped," spokesman Martin Nesirky said.

"Stressing the need do everything possible to dissuade the M23 from making further advances and to cease fighting immediately, the secretary general urged Presidents Kagame and Kabila to pursue dialogue in order to defuse tensions and bring an end to the crisis," he said.

Rwanda and DR Congo must sit down for talks if they want to resolve the unrest, said Thierry Vircoulon, director for Central Africa at International Crisis Group.

"Everyone wants things to be resolved this way. We'll see if the Rwandans say yes and come along. The objective is discussion between Rwanda and DR Congo to stop the problem," he said.

The UN's mission in DR Congo, MONUSCO, is one of the largest UN peacekeeping operations in the world.

Tens of thousands have fled fighting into Uganda in recent months.

"The crises and conflicts affecting eastern DRC can rapidly destabilise the country and also spread even to the entire region," the foreign ministry said in a statement.

Uganda said it had called for a special meeting of the International Conference on the Great Lakes Region to discuss the crisis, on the sidelines of an African Union summit beginning Sunday.

When M23 fighters on Friday seized Bunagana, the rebels forced around 600 DR Congo troops to flee into Uganda where they were disarmed and placed under the supervision of the Ugandan military.

Ntaganda is wanted by the ICC for recruiting child soldiers in the Ituri region a decade ago. His co-accused and former boss Thomas Lubanga was sentenced to 14 years in jail by the tribunal, based in The Hague, on Tuesday.

A/R: Over 500 houses earmarked for demolition in Afigya Kwab...
42 minutes ago