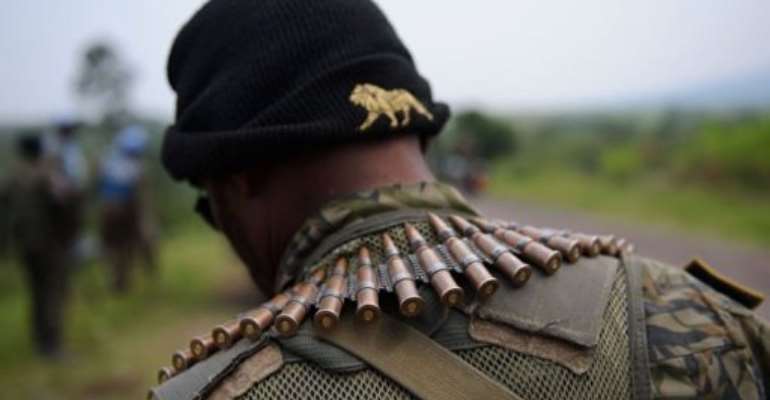 The UN deployment came as Ban urged the presidents of DR Congo and Rwanda to "defuse tensions". By Phil Moore (AFP)

GOMA, DR Congo (AFP) - UN troops in the eastern Democratic Republic of Congo have stationed tanks around the key city of Goma for fear of an attack by mutineer soldiers, as calls mounted for action to ease tensions.

The UN deployment came as UN chief Ban Ki-moon urged the presidents of DR Congo and its rival Rwanda to "defuse tensions" over the rebellion in the resource-rich but war-plagued central African nation.

Rwanda has denied claims it is supporting the so-called M23 rebels, who split from the government army in March in protest at wages and conditions and have been fighting ever since.

An AFP photographer said about a dozen UN tanks were stationed around 25 kilometres (15 miles) north of Goma on a road linking the city to Rutshuru which the mutineers seized briefly at the weekend.

At least two Congolese army tanks were also seen on the road.

M23 rebels seized a number of towns along the Ugandan border, including Rutshuru, before withdrawing from all but Bunagana, a town on the border with Uganda.

M23 -- named after a failed 2009 peace deal signed on March 23 -- is led by Bosco Ntaganda, a man nicknamed the "Terminator" who is wanted for war crimes by the International Criminal Court.

UN officials and the DR Congo government fear that M23, which has added fighters in recent weeks, might be planning to target Goma, the capital of Nord-Kivu province and which lies on Lake Kivu on the border with Rwanda.

But a diplomat in Kinshasa said this now appeared unlikely.

"Everything in the way that the mutineers have withdrawn from Rutshuru indicates that they don't intend to take big towns like Goma," the diplomat said on condition of anonymity.

Ban spoke to Presidents Paul Kagame of Rwanda and Joseph Kabila of DR Congo to discuss the deteriorating humanitarian and security situation in the east of the country, UN spokesman Martin Nesirky said.

The DR Congo government and a UN panel of sanctions experts have said Rwanda is supplying arms and fighters to M23 rebels. Rwanda has denied involvement.

Ban "expressed grave concern" over reports that the M23 "are receiving external support and are well-trained, armed and equipped," said Nesirky.

The UN secretary general sought to "identify possible steps to resolve the crisis."

"Stressing the need do everything possible to dissuade the M23 from making further advances and to cease fighting immediately, the secretary general urged Presidents Kagame and Kabila to pursue dialogue in order to defuse tensions and bring an end to the crisis," said the spokesman.

The UN's mission in DR Congo, MONUSCO, is one of the largest UN peacekeeping operations in the world.

Tens of thousands have fled fighting into Uganda in recent months.

"The crises and conflicts affecting eastern DRC can rapidly destabilise the country and also spread even to the entire region," the Ugandan foreign ministry said in a statement.

"The armed conflict in eastern DRC has increased forced displacement of populations."

Uganda said it had called for a special meeting of the International Conference on the Great Lakes Region to discuss the crisis, on the sidelines of an African Union summit beginning Sunday.

When M23 fighters on Friday seized Bunagana, the rebels forced around 600 DR Congo troops to flee into Uganda where they were disarmed and placed under the supervision of the Ugandan military.

Over 30,000 DR Congo refugees have registered in Uganda since fighting flared earlier this year, officials say.

Kinshasa said in May that it did not rule out sending Ntaganda to the ICC, where he is wanted for war crimes including using child soldiers.