Let Me Be Myself As I Walk Together With You 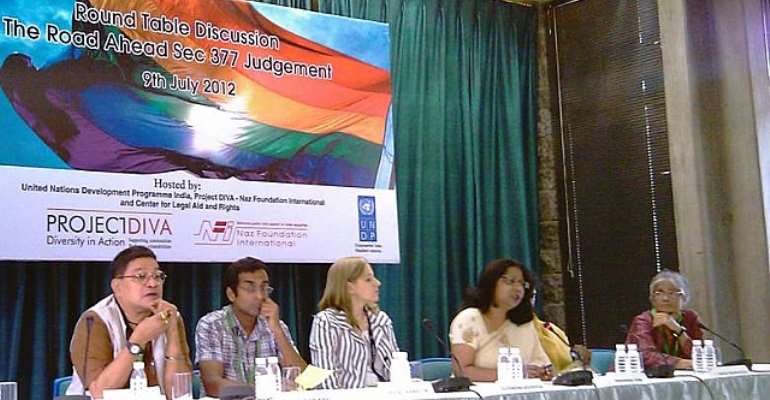 It has been three years since Section 377 of Indian Penal Code drafted in 1860, (which reads as 'Whoever voluntarily has carnal intercourse against the order of nature with any man, woman or animal, shall be punished') was repealed by the Delhi High Court on July2, 2009, as the Division Bench of Justice A P Shah and Justice S Muralidhar noted that the provision of Section 377 which criminalised consensual sexual acts of adults in private, violated the fundamental right of life and liberty and the right to equality as guaranteed in the Constitution.

As we celebrate the 3rd anniversary of this ground-breaking judgment (which has since been challenged and awaits a final verdict in the Supreme Court) I am reminded of Mahatma Gandhi's words—affection cannot be manufactured or regulated by law. The judgment of Justice A P Shah went beyond the right of men to love men in consensual sex. By striking down a punitive barrier and impediment to effective public health, it actually upheld the right of gays to live and thereby acknowledged the rights of other sexual minorities—lesbians, bisexuals and transgenders—to a life of dignity.

Perhaps it is the fault of our conventional and presumptuous upbringing, closeted from ground realities, which makes us forget that gender identities can at times be, very different from, and independent of, our biological sex. Why is somebody (or some bodies) thought to be of lesser human value on the basis of caste (dalits); colour (dark); religion (Muslims); sexual orientations (lesbians, gays, bisexuals and transgender people--LGBTs) in our country? What sort of mental perversion allows us to assault the dignity, safety and privacy of these bodies, just because we perceive them to be different from the run of the mill ones?

The key messages that emerged at the end of the animated session aimed at changing the regressive laws; changing the attitudes/mindsets of general public; strengthening community voices and providing them platforms to come together to seek a place in mainstream society. While the Delhi High Court judgment has given strength and support to the gay community in India, sexual minority communities continue to struggle with entrenched social and religious biases that exist against them. A slow change of attitudes will hopefully allow the other rights of the community to be affirmed by the mainstream institutions. A concerted effort is be necessary to bring about this change of attitudes earlier, rather than later.

According to Abhina Aher, Programme Manager of Pehchan at India HIV/AIDS Alliance, “Irrespective of the SC judgment, the movement will move forward. As of now the struggle is about identity, visibility and acceptance of LGBT community in society. But the common issue that really has to be up scaled is on the health perspectives of transgenders which is denied at this point of time. The law is important but law cannot change everything. It can only act as a facilitator - changing the perspective of people is a bigger challenge.”

For Akkai Padmashali the transgender activist from Karnataka who said to Citizen News Service (CNS), “A favourable Supreme Court judgment will send a very positive message to all sections of society and open many other doors for many other rights of the marginalized communities which are still denied to them-- adoption rights, marriage rights, property rights, identity rights, livelihood/job opportunities, and political involvement.”

Ernest Noronha, Programme Officer at UNDP feels that, “The debate around section 377 has initiated a discussion on a once taboo subject—a discussion which went out of the Delhi court room and spread to the streets, houses, and decriminalized the existence of gay men. We now need to take the movement from urban to rural areas, and to push forward for not only rights but also for equal opportunities. It is time for the different groups of sexual minorities to align with each other and also with other organized groups and work together with government agencies, civil society, and development partners —only then we will be able to bring out the issues forcefully. When we talk of equitable access, the equity is also on the basis of caste, economics. More bridges need to be built apart from de criminalizing same sex behavior.”


It is time we realized that democracy cannot be the tyranny of the majority, in as much as autocracy is the tyranny of an individual. Everyone has the right to have a life of dignity irrespective of her sexual orientation and it is not your or my morality that holds sway. Archaic and punitive laws only drive the problems underground, instead of addressing them, and deny affected communities access to health and other services. The way forward would be to bring about positive changes in law so that no section of any community is denied its rights. Aditya Bandyopadhyay, from LGBT Adhikaar is optimistic that, “Once the road block of Section 377 is repealed by the Supreme Court, it will be the crucial first step on the road ahead where we have so many other issues to deal with and fight for as well—sexual violence, sexual harassment of queer people in the work place, issues around inheritance, maintenance, insurance, mortgage, surrogacy, adoption.”

Even as Washington DC gets ready to host the XIX International AIDS Conference (AIDS 2012) late this month, 72 years old US senator Barney Frank married his 30 years old male partner Jim Ready on 7th July, 2012 in what is reported as the first same sex marriage in the history of US Congress. Frank's homosexuality has not stood in his way of being admired for his sharp wit and legislative ability and he has been voted to the US House of Representatives for 16 consecutive terms from the same Massachusetts constituency.

Of course marriage is not the only issue. According to Akkai—“There are other important issues about the rights, identity, and livelihood of transgender community as well. AIDS 2012 could open the doors by discussing and raising these issues at an international level. Other countries are keenly watching the Supreme Court hearings with anticipation as to how the largest democracy in the world is going to deal with this issue which is about India's dignity and about India's recognition of the whole community.”

Expectations from the IAC are already running high in the LGBT community in India. For Aditya, “The most important thing that I expect at AIDS 2012 is that it will help continue to generate and maintain pressure on the governments, who will find it difficult to do a volte face back home after committing something in an international forum. Ultimately the government also wants to be seen as progressive in the international arena.”

Similar sentiments are expressed by Abhina—“Communities are awakened now and AIDS 2012 will make more people talk about their problems. The sheer presence of the community at the conference will have a lot of potential for people to get sensitized. When you see a TG, or an MSM or a gay person talking at an international forum like AIDS 2012 one is bound to listen and become sensitized about their issues.”

“Conferences are platforms which bring out more people out in the open. More is the number of people who talk about their own selves in forums like the AIDS conference, more does it give a human face to the problem. When so many community voices come together on an international platform, governments are forced to act whether out of compulsion or out of conviction. So AIDS 2012 is another platform where governments will renew their old promises, and probably build new ones too. As with any international conference, when governments participate, the pressure is built not to look at HIV as a single health issue. It has social, economic and other effects on people. The fact that it is touching lives of people, talking about discrimination, stigma, and access to services, is in itself important”, says Ernest.

AIDS 2012, while focussing on turning the tide of the AIDS epidemic, is expected to act as a spring board to open the doors by discussing and raising LGBT issues at an international level. This is likely not only to give a fillip to the ever growing movement around the rights of these communities, but would also encourage society in general to accept marginalized communities by bringing them into the mainstream and thus enabling them to access healthcare and other facilities. (CNS)