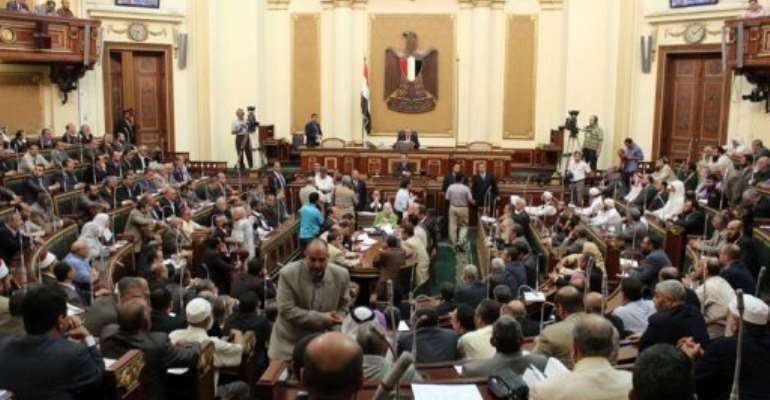 First session of the Egyptian parliament in Cairo. By (AFP)

The decision is expected to raise tensions between Morsi, the top court and the Supreme Council of the Armed Forces (SCAF) which handed over power to the new president at the end of June.

"The court ordered the freeze of the president's decree," the source said.

On Sunday, just eight days after taking office, Morsi, a former member of the powerful Muslim Brotherhood, ordered the lower house to reconvene.

His move highlighted the power struggle between the president and the Supreme Constitutional Court which last month said certain articles in the law governing the parliament elections were invalid, annulling the lower house.

The judicial source added: "The court ordered that its previous ruling (invalidating the elections and annulling the lower house) be implemented."

The latest announcement came hours only after the dissolved parliament convened on Tuesday in defiance of the powerful SCAF and the judiciary.

"We are gathered today to review the court rulings, the ruling of the Supreme Constitutional Court," which ordered the house invalid, speaker Saad al-Katatni said.

"I want to stress, we are not contradicting the ruling, but looking at a mechanism for the implementation of the ruling of the respected court. There is no other agenda today," he added.

On Monday, the Supreme Constitutional Court rejected Morsi's decree, saying that all of its rulings were binding.

"All the rulings and decisions of the Supreme Constitutional Court are final and not subject to appeal ... and are binding for all state institutions," it said.

And the military echoed it with a statement late on Monday saying the constitution and the law must be upheld.