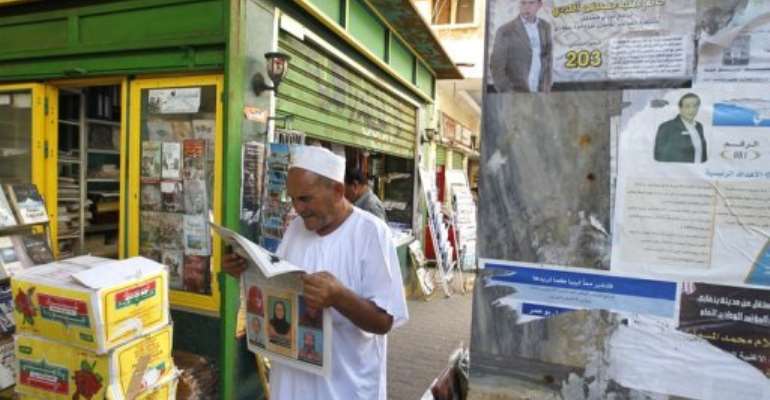 Mahmud Jibril of the National Forces Alliances has called for all Libya's parties to come together. By Mohammed Abed (AFP/File)

TRIPOLI (AFP) - Electoral authorities were finalising the vote count on Monday from Libya's first free polls in decades as an architect of the revolt that toppled Moamer Kadhafi called for national unity talks.

Mahmud Jibril of the National Forces Alliances, which is expected to do well based on preliminary unofficial figures from the weekend election for a national assembly, called for all parties to come together.

"We extend an honest call for a national dialogue to come all together in one coalition, under one banner... to reach a compromise, a consensus on which the constitution can be drafted and the new government can be composed," said the NFA leader.

"There was no loser and winner at all. Whoever is going to win, Libya is the real winner of those elections," Jibril added.

His remarks came hours after the leader of the rival Justice and Construction Party, Mohammed Sawan, admitted the NFA had an early lead in the vote count for the capital and Libya's second-largest city of Benghazi.

"The National Forces Alliance achieved good results in some large cities except Misrata," he added.

UN leader Ban Ki-moon called for Libya's new leaders to govern in a spirit of "justice and reconciliation" as he hailed the country's first elections since Kadhafi's downfall.

NFA secretary general Faisal Krekshi said: "Early reports show that the coalition is leading the polls in the majority of constituencies."

If the results are confirmed, Libya, unlike neighbouring Tunisia and Egypt whose strongmen were also ousted in last year's Arab Spring, will buck the trend of electoral success for Islamists.

"But it is a tight race for us in the south," added Sawan, a former political prisoner and member of Libya's Muslim Brotherhood, which launched the party.

The bulk of Libya's population and registered voters are concentrated in Tripoli in the west of the oil-rich desert country and in the eastern city of Benghazi.

The spokesman for Jibril's coalition in Benghazi said initial information indicated it had garnered the most votes in the east.

But Jibril said the NFA, which he described as a nationalist movement with a broad spectrum of identities and ideologies, would wait for and abide by official results.

Libyans on Saturday voted for a General National Congress, a 200-member legislative assembly which will steer the country through a transition. Turnout was above 60 percent, the electoral commission said.

Eighty seats in the incoming congress are reserved for political entities while the remainder are held for individual candidates, some of them openly allied to specific parties.

Votes are still being tallied with preliminary results expected by Monday night or early on Tuesday, according to the electoral commission, although observers say the count could take another four or five days.

The air force was tasked with transporting ballot papers to the capital for counting, which is taking longer than initially expected for security reasons, and given Libya's huge size.

In a country with no history of political parties and no national surveys, forecasting results is virtually impossible, but early media reports seemed to back the party leaders' claims.

Its lead, the private channel said, was also strong in the troubled east, with preliminary figures giving it 70 percent in Benghazi and 80 percent in Al-Bayda, hometown of interim leader Mustafa Abdel Jalil.

These figures were unofficial, however, and the commission warned it was best not to release numbers that could create false expectations or "confuse voters" if the results proved different.

Apart from acts of sabotage in the east and one death in Ajdabiya as gunmen opened fire near a polling station, the vote was held in a festive atmosphere in major cities.

On Sunday, eastern oil facilities resumed normal operations, an industry official said, after a three-day protest over the region not being granted more seats.

US President Barack Obama led a chorus of praise for Libya's historic vote.

"On behalf of the American people, I extend my congratulations to the people of Libya for another milestone on their extraordinary transition to democracy," Obama said.

Section of N1 Highway to be blocked for GRIDCo’s stringing w...
57 minutes ago