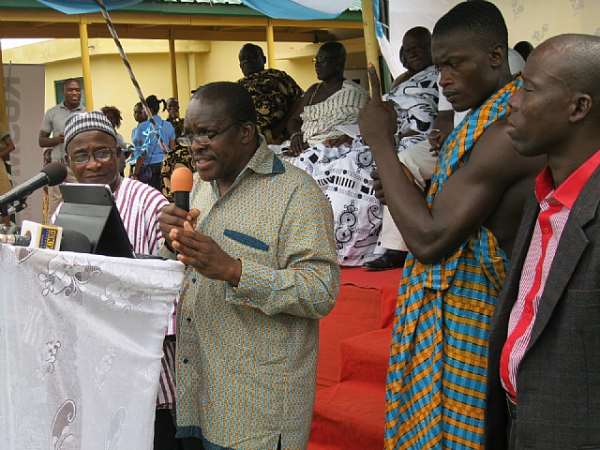 The chiefs and people of Axim and the Nzema area have not yet forgiven President JEA Mills and his National Democratic Congress (NDC) government. And they have always not hidden it. The genesis? A little flashback will do.

Dr George Sipa-Adjah Yankey was one of the first people on President Mills' ministerial list. And from how he started work his future was auspicious in the President's team. Never mind whether it was Team A or Team B. However, that auspicious future in the ministerial position was short-lived.

A UK-based supplier of steel bridging, Mabey and Johnson Limited, was prosecuted in 2009. This followed the company's disclosure that it had "sought to influence decision-makers in public contracts in Jamaica and Ghana" between 1993 and 2001.

The Ghanaian officials mentioned in the alleged scandal included Dr Yankey, who was then a director at the Ministry of Finance and Economic Planning, and Alhaji Seidu, a Minister of State at the Castle, who was also a Deputy Minister of Roads and Highways in the 1990s.

The rest were Dr Ato Quarshie, who was a Minister of Roads and Highways; Alhaji Boniface Abubakar Siddique, Minister of Water Resources, Works and Housing in the government of President John Agyekum Kufuor, who was a director at the Ministry of Finance and Economic Planning at the time of the alleged scandal, and one Mr Edward Attipoe.

Dr Sipa Yankey was accused of receiving a bribe of $15,000, which he reportedly admitted was a gift. He subsequently resigned as Health Minister to 'clear' his name. Like many Ghanaian public officials who leave or are forced to leave office with the promise of clearing their names, nothing much has been heard about Dr Sipa Yankey's innocence.

But what has still kept his name afloat in the turbulent waters of the Ghanaian media is the refusal by chiefs of his area to let the matter die. The Omanhen of Nsein Traditional Area is one of them.

Awulae Agyefi Kwame II went public and expressed his disappointment at Dr Yankey's resignation and subsequent replacement. "As a traditional ruler I am not happy and I want to meet the President and tell him his mistakes," he said.

The Western Regional House of Chiefs had earlier denied that it had met to "wage war" against the President in connection with Dr Yankey's resignation and replacement.

But when Awulae Kwame addressed a news conference he said: "I am one of the traditional leaders in the region who are not happy with President John Evans Atta Mills' failure to appoint an indigene from our region to replace Dr Sipa- Yankey."

Today, Awulae Kwame has still not got over the issue as he co-chairs this function with the Omanhen of Lower Axim Traditional Area, Awulae Attibrukusu III. Kosmos Energy has rehabilitated the erstwhile Chest Centre at the Axim Hospital into an accident and emergency centre. The oil and gas company has also rehabilitated the CHPS compound at Ewoku and the Minister of Health, Mr Alban Bagbin, has joined the chiefs and people here to commission these projects.

Mr Bagbin has told the people of some initiatives the government is putting in place to enhance healthcare delivery in the country. The Health Ministry, he has said, is taking delivery of 161 well-equipped state-of-the-art ambulances at the cost of €10 million. Fifty of these ambulances have already been distributed around the country and the rest will soon be arriving.

He has also said 23 district hospitals are receiving digital X-ray units under the Hospital Radiography Services Improvement Project while a nationwide staff housing programme is also being pursued. For Axim, a block has already been purchased and will be rehabilitated to house health workers there.

As part of effort to address the challenges of equipment, Mr Bagbin has told this gathering that the ministry is taking delivery of over US$267 million worth of medical equipment, 20 mobile clinics and related services this month under the National Medical Equipment Replacement Project.

He has also noted that that the exploration of oil in the Western Region came with health-related challenges and government is taking steps to equip health facilities in the region to be able to deal with the new challenges. For this reason the Effia-Nkwanta Hospital will be upgraded into a regional hospital. But before then it is benefitting from an ultrasound scanner, six-bed adult intensive care unit, dental unit, neonatal intensive care unit, Labour Ward, general adult and paediatric ward equipment, operating theatre equipment and surgical instruments. The rest, he has said, are medical imaging, including ultrasound, digital mammography for breast cancer screening, floor-mounted X-ray, 16 multi-slice CT scanner, C-arm, ophthalmology and E&T examination and treatment units and a colposcope for cervical examination.

In addition, Mr Bagbin has said that Labour Ward and outpatient's department equipment would be supplied to health facilities in the Western Region, such as Bibiani, Dixcove, Enchi, Essikado, Half Assini and the Kwesimintsim polyclinics. The rest are Prestea, Sefwi-Wiawso, Shama district hospitals; the St Martin de Porres Hospital at Wassa Akropong and Takoradi Hospital. Five new polyclinics, Mr Bagbin says, are to be built in Wassa Dunkwa, Bogoso, Nsuaem, Elubo and Mpohor.

When Awulae Agyefi Kwame takes his turn after the Minister's speech, his first impression is not about the developments and projects, which the Minister has just mentioned. Instead, he reminds the whole gathering about Dr George Adjah-Sipa Yankey's “removal” from office and how that has affected the development of the area.

Whether his assertion about the development of the area coming to a halt is true or not, I think it is unfortunate for the chiefs of the area to continue with such an attitude. With such an attitude, they are imbuing in the youth the spirit of greed and not of national interest. Politics and national development should not be made to look like the proverbial Kokofu football team, where one is not given a pass if one's brother is not playing.

For instance, Awulae Kwame said it was unacceptable that the Axim Hospital had one medical doctor instead of the three medical doctors it used to have. What he did not know is that the current Health Minister's district has not got a single medical doctor, and the same is the case for many districts in northern Ghana. Are they deprived because they have no people in government?

Like the main character in Chinua Achebe's No Longer at Ease, the pressure for politicians to be corrupt and bend the rules often comes from insatiable demands from traditional rulers and members of their community.

Instead of lamenting over George Sipa Yankey and sending the wrong signals to the youth of the area, Awulae Kwame and those who think like him should teach their youth about the values of our selfless Dr Kwame Nkrumah, who is not only the pride of Ghana and Africa but also of their area.

Anyway, my headline does not suggest that I want to wage war against the chiefs of Axim. My fingers set out to dance a friendly dance, not a war dance, on the poor keyboard. They set out to dance type of dance performed by school children of Axim at the aforementioned ceremony.

The children performed three separate traditional dances. The second one, which preceded the Minister's speech, ended in a spectacular fashion. One of the girls had the shorts beneath her wrapper cloth removed. She had to dance out of stage with one hand on the khaki shorts, which was fighting to be set free.

The gathering, including those on the dais, shook with laughter and cheers. But that incident did not take away the beauty of the traditional dances that were so well performed. So it was not strange when Mr Alban Bagbin preceded his speech with a word of honest praise for the dancers.

He encouraged them not to forsake their culture and the traditional music and dance, saying as a nation “we cannot move ahead if we forget our where we are coming from.” But that did not end there.

Mr Bagbin said he was so impressed and decided to make a personal donation to the children who danced. And the grounds again shook with cheers when he mentioned and handed over GH¢1,000 to the children.

“Ten million cedis?” a nurse who stood behind me exclaimed. “I don't remember the last time I handled such an amount.”

The young man who took the money on behalf of the children walked towards the group as if he had springs under his feet. I don't know how that money would be shared and how much each child would get. What I can say for sure is that the next time these children are called to rehearse and perform a traditional dance, they will do it with gusto and dance themselves lame on the D-Day. Some of them may say with a pang of nostalgia in future: “I once danced and won 10 million cedis from a minister of state.”

But it should not end there. Traditional dances should not be used only to relieve boredom at official functions or at traditional festivals alone; they should be made part of us. Instead of the ear-shattering noise and profanity we hear on our airwaves and at functions, we should learn to promote our indigenous music and dance.

They carry pearls of wisdom in their lyrics. They inspire, teach traditional values and admonish against greed and selfishness with which our nation is infested. Some of the traditional music and dance are embodiment of our history and remind us that we had a story, long before the White man came from across the azure ocean to “discover” us and to tell us that we are not civilised enough.

Besides, they are very danceable and you don't need to attend paid sessions like salsa classes to enjoy them. If you doubt me, get a borborbor track and tell me which dance you cannot do with that beautiful rhythm.

Just try it.
Savannah View is a weekly column published in the Tuesday edition of The Finder newspaper. Writer's email: [email protected]