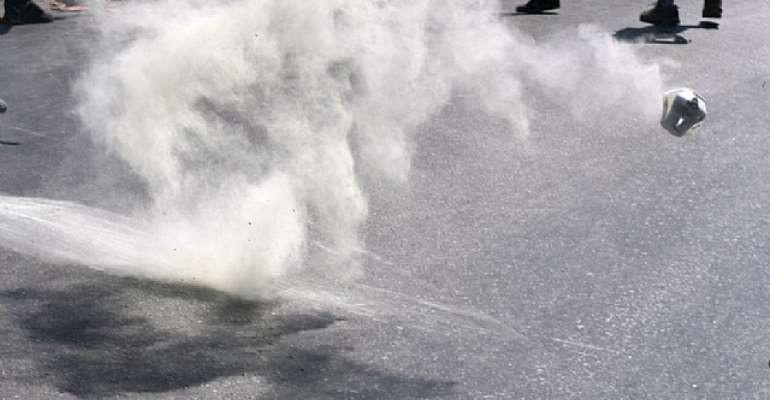 Takoradi, July 3, GNA – Members of the public were going about their daily activities within the market circle area of the Sekondi/Takoradi Metropolis have expressed disappointment at personnel of the Ghana Police Service for the use of tear-gas to disperse angry demonstrators.

They said the Police could have adopted a better method of controlling the demonstrators rather than firing tear-gas which left passer-bys, gasping for breathe even in the open environment at the market square.

The demonstrators were largely made up of the Kokompe Garages Association, traders and businesses who were asking for better access to roads to facilitate their businesses.

Some angry traders retorted, “the police did not learn a lesson from May 9 Disaster,” and “We are not in Cote d Ivoire.”

For more than 20 minutes, buyers, traders and visitors alike at the market run for their dear lives from the pepper-like substance fired into the atmosphere by the Police in an attempt to disperse the demonstrators who were demanding the immediate repairs on a stretch of road.

Some used handkerchiefs, cloths and other materials to cover their nostrils to avoid suffocation as they rumble and jumble for dear live.

Maame Efua, an okro seller at the market expressed disappointment at the action of the police.

Meanwhile, a class four pupil of the Wiawso Road Basic, Miss Nancy Forson was rushed to the Takoradi Hospital after she collapsed.

Reports gathered indicated that the pupil is asthmatic.

Madam Cynthia Quayson, a sister in-law told the Ghana News Agency that she Miss Forson was responding to treatment.