ARE AFRICA'S LEADERS JUST THAT GULLIBLE, OR INCOMPETENT? 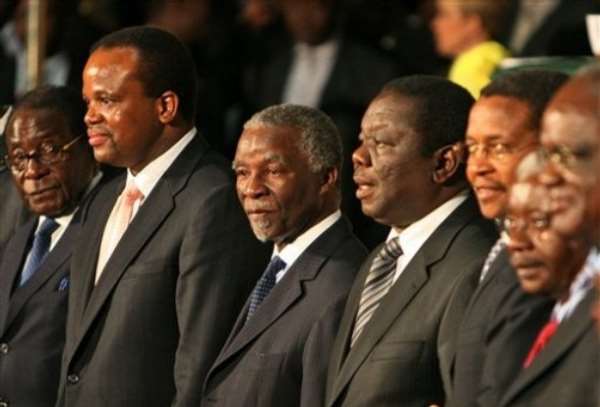 Frequently we are asked by both the Black in the Diaspora and White people how, and why, in good conscience, Africans SOLD their Brothers, Sisters, Sons and Daughters to the white man; and continued to do so for TWO HUNDRED YEARS. We make up answers such as (a) they really did not know the cruelty awaiting their sold kinfolks on the other side of the Atlantic, (b) they were Uneducated, and therefore did not understand the transactions, (c) Our ancestors and Chiefs were not complicit in this trade. We try to whitewash with these flimsy excuses for our Chiefs' and Elders' involvement in an inhuman, sordid, exploitative and degrading phenomenon ever perpetuated on mankind. These horrible acts occurred over 600 years ago!! So we thought!!

Today, we know what the white man thinks of, and means for the Black man. We are “EDUCATED” with Masters' and PhD's from their own universities, and among their brightest students. But then we come home, hold their hands, lead them through the corridors of our institutions and power, and with wide grins, hand them on silver platters what their countries protect, develop and utilize for the advancement of their people. Unfortunately, just as our Chiefs and Elders of the 15th century traded their kinsfolk for beads and schnapps, so do our modern day governments (from the Presidents, his appointees, Ministers down to the Parliaments) trade away our wealth for pittance, usually with a little “something in their overseas bank account.

Ghana's food problem HAS NOTHING TO DO WITH LOW YIELD, OR NON-NUTRITIOUS CROPS. Lack of road network, leading to inefficient, and sometimes non-distribution of our abundant harvest is the problem.

So why are the WHITE Corporations so bent on forcing on Africa their Genetically Modified (GM) seeds/food? Is it just for a wider market or is there a more sinister agenda (population control is suggested by some)?
THE SAD PART IS THEY ARE USING OUR GHANAIAN GOVERNMENT, SPONSORED PhD'S, AND “TRUSTED” FRIEND, PRESIDENT OBAMA TO EXECUTE THIS AGENDA, JUST LIKE THEY USED NKRUMAH'S AMERICAN FRIEND TO OVERTHROW HIM, RESULTING IN THE COLAPSE OF THE AFRICAN /BLACK RENAISANCE.

This link describes President Obama's efforts at supposedly addressing the hunger problem in Africa, by inviting Corporate heads, as well as leaders of Ghana, Tanzania, and Ethiopia to a Camp David G8 meeting. Even some of the participants are skeptical of the end results, as evidenced by their statements below.

“---But the head of the U.S. Agency for International Development, Rajiv Shah, acknowledged there will be fears of “a multinational takeover of African agriculture.”

“-- according to U.S. estimates only about 58 per cent of $22-billion in 2009 has been spent so far Moreover, some of the spending was on traditional food handouts, rather than the long-term projects that were promised.”

Mr. Obama's emphasis on multinational corporations is the wrong focus, since most of Africa's food is produced by small farmers, especially women, Mr. Fox noted.

“If you want to make progress where the needs are greatest, it's not in industrial agriculture or high-tech solutions.”

Cargill and Monsanto, the largest genetically modified (GM) seed/food companies, were there. You can bet your last cedi/dollar that they were NOT at this meeting with pledges to expand /improve our road network, for efficient distribution of our abundant harvests. Rather, their motive will be to force on Africa, GM seed/food using Ghana, Tanzania and Ethiopia as guinea pigs, and with President Obama as a blind conspirator.

Recently, well-meaning FARMERS from East Africa and Scientists from Europe came to warn us about the traps and dangers of GM food from the US. Did our President, Ministers and Parliament listen to them? NO!!.
If our government officials are too busy to research the merits and pitfalls of GM foods, why not employ some of the teeming UNEMPLOYED graduates to do that?

WHAT MUST OUR GOVERNMENT DO?

FOR THE CONCERNS LISTED BELOW, WE MUST DO THE FOLLOWING AS A MATTER OF URGENCY:

So let us examine what our “Educated” President, Cabinet and Parliament are ushering us Ghanaians into.

This link  http://en.wikipedia.org/wiki/Genetically_modified_food#Method reveals these facts among others:

1. Destruction of Trial crops:
Within the UK and many other European countries many trial crops are frequently destroyed. The primary concern of the protestors is that contamination of existing crops could destroy existing markets. (organic produce) Scientists take many precautions to minimize the risks as much as possible and admit the risk of contamination is small. However, campaigners counter with examples of widespread contamination that has already occurred despite assurances and promises from scientists.

2. Crop yields (the much touted marketing gimmick of GM Companies) :

A 1999 study by Charles Benbrook, Chief Scientist of the Organic Center,[68] found that genetically engineered Roundup Ready soybeans did not increase yields.[69]
2008 Soil Association report found that some scientific studies claimed that genetically modified varieties of plants do not produce higher than normal plants.[72]
In 2009 the Union of Concerned Scientists summarized numerous peer-reviewed studies on the yield contribution of genetic engineering in the United States. This report examined the two most widely grown engineered crops—soybeans and maize (corn),[73] and concluded that yield did not increase at the national aggregate level. The study concluded that in the United States, other agricultural methods have made a much greater contribution to national crop yield increases in recent years than genetic engineering.

4. Intellectual property
Traditionally, farmers in all nations saved their own seed from year to year. Allowing this practice to CONTINUE with genetically modified seed would result in seed developers losing the ability to profit from their breeding work. Therefore, genetically-modified seed is subject to licensing by their developers in contracts that are written to prevent farmers from following this practice.[120]
http://www.csa.com/discoveryguides/gmfood/overview.php
5. What are some of the criticisms against GM foods?
Environmental activists, religious organizations, public interest groups, professional associations and other scientists and government officials have all raised concerns about GM foods, and criticized agribusiness for pursuing profit without concern for potential hazards, and the governments for failing to exercise adequate regulatory oversight. It seems that everyone has a strong opinion about GM foods. Even the Vatican19 and the Prince of Wales20 have expressed their opinions. Most concerns about GM foods fall into three categories: environmental hazards, human health risks, and economic concerns.

5a. Environmental hazards
Unintended harm to other organisms: Last year a laboratory study was published in Nature21 showing that pollen from B.t. corn caused high mortality rates in monarch butterfly caterpillars. Monarch caterpillars consume milkweed plants, not corn, but the fear is that if pollen from B.t. corn is blown by the wind onto milkweed plants in neighboring fields, the caterpillars could eat the pollen and perish. Although the Nature study was not conducted under natural field conditions, the results seemed to support this viewpoint. Unfortunately, B.t. toxins kill many species of insect larvae indiscriminately; it is not possible to design a B.t. toxin that would only kill crop-damaging pests and remain harmless to all other insects.

5b. Human health risks
Allergenicity: Many children in the US and Europe have developed life-threatening allergies to peanuts and other foods. There is a possibility that introducing a gene into a plant may create a new allergen or cause an allergic reaction in susceptible individuals.

Unknown effects on human health: There is a growing concern that introducing foreign genes into food plants may have an unexpected and negative impact on human health.

5c. Economic concerns: EXAMPLE OF THE RECENT SUNFLOWER FIASCO
Agri-biotech companies wish to ensure a profitable return on their investment. Many new plant genetic engineering technologies and GM plants have been patented. Seeds for initial and subsequent plantings have to be purchased at GM companies' prices, which can be so high that small farmers and third world countries will not be able to afford seeds for GM crops, thus widening the gap between the wealthy and the poor.
Recently a company came to Ghana to sell GM sunflower seeds with a promise to purchase the harvests. In the end the poor farmer could only sell his harvest to that same company at the company's price. Worse of all, the farmer cold not replant the seeds from his crops, but had to GO BACK AND BUY NEW SEEDS FROM THE COMPANY.