Who is More Desperate for Power, Mills or Akufo-Addo? 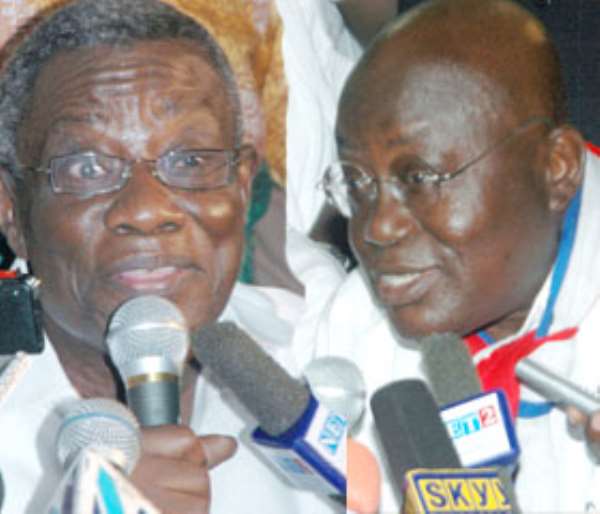 For some time now members of the National Democratic Congress (NDC) have not spared Nana Akufo-Addo at all. Whilst they see his actions as 'threat' to them, most of Nana's statements have been misinterpreted to the masses. Their aim is to make Nana Addo lose touch with the electorate in order to perpetuate President Mills' presidency. Even Nana Akufo-Addo's free secondary education policy has been taken to mean that he is desperate for power. These accusations, in all honesty, have not gone down well with me hence the title for this article. After reading this piece I expect readers to expose those who make such baseless accusations as we gear up for the December general elections. Casting our minds back to the year 1996, we learn that the late Kow Nkensen Arkaah was severely beaten at a cabinet meeting by his own boss, Flt. Lt. Jeremiah Rawlings. However, after the fallout between the sitting president and his vice, Prof. Mills was plucked from nowhere to partner President Rawlings for the 1996 general elections. As a renowned professor, and more importantly a kinsman to Arkaah, Mills, who was expected to condemn the barbaric action surprisingly grabbed the opportunity to give meaning to the adage that one man's meat is another man's poison.

The NDC' landslide victory in the 1996 elections automatically conferred Prof. Mills as the vice president of Ghana between 1997 and 2001. The “Swedru Declaration” in 1998, in spite of its objection by some NDC gurus such as Messrs Goosie Tanoh, Paul Victor Obeng, and Yao Obed Asamoah, also gave Prof. Mills the chance to lead the NDC. Consequently, Prof. Mills contested against J.A. Kufuor of the New Patriotic Party in the 2000 general elections. Those who watched and listened to then vice president Mills could attest to his level of confidence as he prepared for the 2000 parliamentary and presidential elections. Mills' confidence was so high that he vehemently rejected the 100 days grace period given to newly elected presidents because to him, he was already in motion. Surprisingly, Prof. Mills lost the first round of the 2000 elections to his main competitor, John Agyekum Kufuor. In the run-off, Mills, with his NDC was confined to the opposition despite the lies and threat by Ekow Spio Garbrah that over 2 million prospective NDC voters would participate in the run-off.

Could Prof. Mills call it quits after his 2000 presidential defeat? The answer was no! As if he was the only intellectual in the NDC, Prof. Mills for the second consecutive time competed with President Kufuor in the 2004 general elections. However, as faith would have it, Mills lost to John Agyekum Kufuor, then the incumbent president. To satisfy his insatiable want at all cost, Prof. Mills challenged the 2004 presidential elections at the law courts until the Supreme Court ruled in favour of Kufuor and his NPP. By 2008, many a Ghanaian, including some NDC members had argued that the law professor should completely retire from politics. For instance, Hon. Micahel Teye Nyaunu, an NDC Member of Parliament for Lower Manya Krobo even called for an emergency delegates' conference to elect a new leader for the NDC. Similarly, Ekow Spio Garbrah opined that; “the NDC must consider more quality, and well-packed political commodity to the political market so that political buyers could have value for their votes”. However, as power drunk as he was, Prof. Mills ignored those pieces of advice and appealed to the NDC delegates to try him for the third time.

Though Mills' appeal was considered by the party's founder and the NDC delegates, it led to another division within the NDC as Dr. Obed Asamoah and his faction broke away to form the Democratic Freedom Party (DFP). That notwithstanding, Mills was given the nod to compete with the NPP's Nana Addo Dankwa Akufo-Addo in the 2008 general elections. Whilst Nana Addo was running the race for the first time, Mills went to that election as a fourth consecutive time (including run-offs) contestant. Despite his promises of reducing fuel prices drastically, dealing ruthlessly with corrupt ministers of state and appointees, and implementing one-time premium, Prof. Mills lost to Nana Addo in the first round. As if he was ordained to become president, Prof. Mills, who had arrogated to himself, the “Asomdwe3hene”, vowed to set Ghana on fire, if the Electoral Commission failed to declare the results in his favour.

Dear reader, how on earth could anybody say or think for a minute that John Evans Atta Mills was/is not desperate for power? But this is what Fiifi Kwetey had to say about his boss prior to the 2008 elections; “Prof. Mills is not desperate for power. He is only seeking for an opportunity to serve the people of Ghana”. Per the above quote, Fiifi was telling Ghanaians that our farmers, teachers, nurses, doctors, market women etc are not serving the people of Ghana because none of them is the president. Does one need to become a president of a country before he could be seen to serve his country? I think only Prof. Mills could provide the answer. Lo and behold, the opportunity befell on Prof. Mills in 2008 when members of the Convention People's Party (CPP) supported his bid during the run-off. He beat Nana Akufo-Addo by less than 1% of the valid votes cast. Nana Akufo-Addo readily accepted defeat in good faith and congratulated the president-elect, Prof. Mills. Nana Akufo-Addo, unlike Mills, never contested the results as announced by the Chairman of the Electoral Commission, although there was enough evidence of electoral malpractices. Per this singular action, and with the 2012 presidential election being Nana Addo's second attempt, how could any objective-minded person accuse the man of being desperate for power? Are Nana's accusers being fair to him?

Fellow Ghanaians, permit me to put on record that Prof. John Atta Mills has been the luckiest president of Ghana since 1960. I am saying this because Mills never shed any sweat to become the vice president; he never sacrificed any resources to lead the NDC in 1998; and he neither struggled nor suffered to win the presidency in 2009. All these were done by former president Rawlings singlehanded. Talk about his presidency and you realise that a new Presidential Palace was in place for him, his dogs, and his wife; a new Presidential Jet was ready for his routine medical check-ups in the US. On the economic front, His Excellency, J.A. Kufuor had laid a solid foundation and all that President Mills needed to do was to build on that. Social interventions such as free maternal care, national health insurance scheme, capitation grant, mass transit, affordable housing, LEAP etc were in operation. Under Mills' administration, cocoa, gold, and other minerals have increased in quantity and revenue. I don't want to talk about loan facility because it is one area that occupied the first position of the 50 'unprecedented achievements' in the NDC's Green Book. From a debt stock of GHC9.6bn since independence, the national debt, as of 2011 stood at GHC25.3bn, meaning every Ghanaian currently owes around GHC100. In addition to the high increases in taxes of all forms, there has been an introduction of new taxes including our local gin (Akpeteshie). Above all, President Mills was left with oil in commercial quantities and an amount of $547m from the Millennium Challenge Accounts (MCA) was ready to be used. What else does this man expect Ghanaians to do for him in order to perform to our satisfaction? Does he want Ghanaians to carry him on their shoulders or in a palanquin? “Anaa op3s3, y3nkum afunumuponko 3ma no nwe?”

For your information, Prof. Mills by January 7, 2013 would have achieved the following: a president for 4 years; a vice president for 4 years indicating his stay in the Castle for 8 solid years. He would have also been the leader of the NDC for 12 solid years. Therefore looking at his poor record of achievements, his health status, age, and the divisions in his own party, who would have thought that Mills would file for this year's presidential contest? One would also ask; what does Prof. Mills need to prove to Ghanaians that had been hidden from them in the last three and half years? But because of greed and lust for power, this man thought it wise, in the face of high unemployment rate, maternal mortality, and falling educational standards, to splash a whopping GHC90m on his presidential primaries with the view to retaining power. How different is Mills from Robert Mugabe and Laurent Gagbo, if I may ask? Forcing the EC to register prisoners for the upcoming elections, creating new constituencies and districts at the 11th hour, and the distribution of laptops and tractors to party functionaries give credence to Mills' reluctance to leave office as president. Again, the setting up of Special Forces Unit in the Ghana Armed Forces, Heroes Fund, his intention to hand over power in 2017, and the purchase 5 military jets are enough evidence of his diabolic agenda of winning power at all cost.

What is shocking to me is the way President Mills is playing with his health. On his arrival from his medical check-up, the president jogged from end of the airport to another trying to prove his fitness to Ghanaians. But who is the president deceiving, is it himself or the electorate? “Mpanin se, y3rekanfo wo ahooden no, na y3rekanfo w'akyakya'. May be the NDC Communicators expect Mills to be laid in state before they realise that our president is 'dead' in his ideas and actions. I don't really know if President Mills has access to a mirror and tape recorder at his residence. If he has, I would advise him to strip himself naked, stand in a mirror and examine his physical appearance critically. Whilst doing that he should listen to the recorded version of the interview he granted to the media when he arrived from the US. Probably, that might guide him on his decision to contest the December elections. Nelson Mandela, in spite of his struggles and sacrifices, handed over power peacefully after one term in office as president. And today, he is held in high esteem in the global political arena. It is my hope that Prof. Mills will take a cue from the former South African leader in order to avoid the humiliation that awaits him on December 7. His administration has unfortunately prioritised the payment of judgement debts at the expense of free secondary education. The people of Ghana see this action as insult on their intelligence. Ghanaians are very serious people and as such have decided to elect a serious leader who could manage their scarce resources efficiently. On this note, I urge President Mills not to take an entrenched position as done by the likes Mobutu Sese Seko, Kwame Nkrumah, and Col. Gadaffi. Such a mistake will mar the little reputation left in him. “Nsuo too gidigidi mpo ankor3 anny3 ma, na afei a 3reso so ko ko ko 3na 3b3y3d3n”. If after three and a half years the “BETTER” in the Mills' Better Ghana Agenda is missing, why should Ghanaians trust him again? Join the crusade in kicking Mills and his NDC out in December for he is too power drunk.