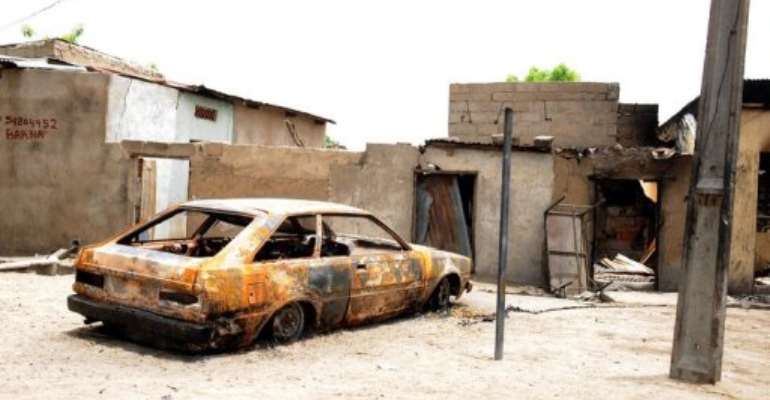 A house and car are ravaged by a bomb explosion by the Islamist group Boko Haram in Maiduguri, Nigeria, in May 2012. By Pius Utomi Ekpei (AFP/File)

"The police station was attacked by a group of gunmen who threw explosives into the police station and opened fire," Yoila said, adding that the building was destroyed by the subsequent blaze.

"Details are still sketchy, so it is still not clear if there were casualties," he added.

The spokesman did not say who was responsible for the raid, but the attack was similar to those carried out by Boko Haram, which has repeatedly hit northeastern Nigeria and has frequently targeted the police.

In March, also in Adamawa state, the extremist Islamist group launched a bomb and gun attack on a police installation in the town of Shuwa, killing three officers.

Days later, another police officer was killed when suspected Islamists bombed a police post in the town of Demsa.

On Tuesday, three policemen were shot dead in neighbouring Taraba state when gunmen attacked a regional police headquarters in the town of Wukari.

Boko Haram is responsible for more than 1,000 deaths across northern and central Nigeria since the middle of 2009.

The group has previously said it wants to create an Islamic state in Nigeria's mainly Muslim north, but its stated demands and grievances have varied widely as its insurgency has intensified in recent months.