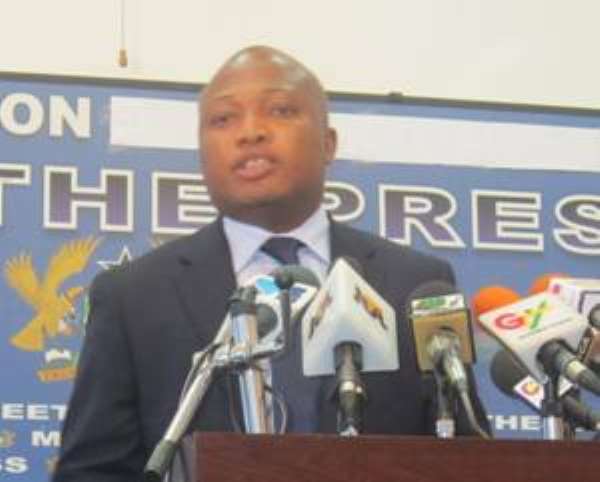 Good Afternoon ladies and gentlemen of the Press, Permit us a space in your esteem media to react to Hon Samuel Okudjeto Ablakwa unfortunate, Reckless & irresponsible statement on the unfortunate death of Hon. Owusu Ansah, member of Parliament for Kwabre West. Hon Ablakwa at a handing over ceremony of his Party's youth wing (TEIN), Evangelical Presbyterian University , Ho, alleged that the death of the affable MP was as a result of the NPP celebrating over the rumored death of the President of the Republic of Ghana.

It must be put on record that no member of the NPP has celebrated over any rumored death of the president. Our Party was founded on the principles of Development in Freedom and believes in Multi-Party Democracy. We have Respect & Compassion for people suffering from one ailment or the other. This is the reason why our flagbearer, Nana Akufo Addo, congratulated His Excellency, Prof Mills after the latter was declared winner of the 2008 General Elections. The NPP has gone ahead to cooperate with the ruling NDC in Parliament and other programmes since then. Further, our Hardworking & Competent Flagbearer recently sent a goodwill message to the President of the Republic when he (the President) said on the night……..at the Airport that he was going for a medical Check up in the USA.

It is therefore very shocking to read in the news media about Sammy Ablakwa Okudjeto statement published on Ghanaweb & Peacefmonline.com that the death of the NPP MP was as a result of the rumored death of President Mills. Does Mr. Ablakwa know something about the death of the MP that the family members, NPP National Executives, and the rest of the country do not know?

It is very clear to us Samuel Okudjeto Ablakwa lacks respect for the sensitivities of the Bereaved family of the late Hon. Owusu Ansah. His statements are an affront to Ghanaian Culture; it is Reckless, unguarded and must be condemned by all well meaning Ghanaians.

Is it fair for Ablakwa to play on the emotions of the people of Ghana to perpetuate his party's state on the seat of Government? Is that how the NDC trained their ministers to speak? The last time, it was Hon Ama Benyiwa Doe attributing the unfortunate skirmishes at Ekumfi Narkwa to Hon Kennedy Agyepong; General Mosquito has blamed Former President Rawlings for the disunity in NDC & now this from a deputy Minister of Information?

We are Challenging Mr. Okudjeto Ablakwa to provide the name of a single NPP supporter that jubilated over the rumored death of the President.

Wait a minute; let's ask ourselves why would the NPP wish the death of the sitting president? Does the Constitution of Ghana automatically give power to NPP in the unlikely event of the President's death? The answer is a big “NO”

The people that work with the president from the Vice President, the Chief of staff, his deputies, the secretary to cabinet, Ministers, Communications Director, etc all are NDC so who leaked the rumored sickness(not feeling well) of the president to the media before he president came out to admit has he has not been feeling well?

Why does the NDC blame the NPP for their incompetence, mistakes and the Poor Health of the President?

Ghanaians are suffering, unemployment rate is getting higher by the day, Poverty is getting higher, Filth has engulfed our cities, workers take home pay cannot take them home, Contractors are crying over unpaid Contracts, the debt burden of our nation has gone beyond the rooftops, Corruption is unprecedented, People are killing each other in Hohoe, Bawku, Nakpanduri & Ekumfi Narkwa leaving in its wake displacements of the people left behind. We expect the NDC government to help solve these problems instead of engaging in useless, unguarded, & reckless statements. Okudjeto's statement is an insult to our culture and most certainly the integrity and sensitivities of the Ghanaian Family system & culture.

We are using this medium to welcome the president of Ghana back from his medical Check up. We hope he gets better and get to work. Our deepest Condolences go to the Family of the Late Hon. Owusu Ansah and the good people of Kwabre. May the Good Lord keep him till we meet again!

Reason why Kwame Nkrumah's children were prevented from seei...
31 minutes ago