Indiscipline In The Colours 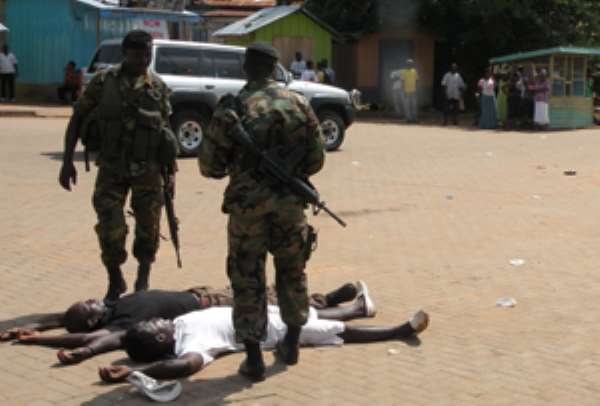 Some recent developments sometimes compel political observers to recall the days of wanton indiscipline when soldiers could strip women naked and even shoot to kill for no justifiable reason.

We recall how, following the restoration of constitutional rule and orderliness in our body-politic, efforts were particularly made to cleanse the image of the Ghana Armed Forces whose personnel engaged in molesting civilians across the country, having been infected with the contagion of the 'deal with the dozy civilians' mentality.

It was not an easy task ridding our memories of the painful spectacles of soldiers stripping women naked and whipping them in broad-daylight, dark days in our history whose return we dread.

Many years after that sordid entry in the annals of our history, signs of these show up periodically in our streets, with mostly young soldiers getting unduly unruly. They do not appear to have learnt anything from the discipline inculcated in them from the drill square to the bush exercises they undertook before getting their regimental numbers.  Whoever told those men that soldiering is about beating up policemen and civilians?

Have such soldiers forgotten all too soon that passing off the square and donning the uniform entails acceptable conduct in the street?

A soldier is subject to both civil and military law, with the former superseding the latter; and soldiers who are unconscious of this shall have only a brief stay in the colours.

On one of the pages of Daily Guide yesterday was a picture of soldiers manhandling some civilians in the course of an internal security operation they were jointly undertaking with the police in Ho.

We could have sworn that was a picture of the 80s when such scenes were common in the country; but regrettably it happened in a 2012 Ghana- a time when orderliness is supposed to have replaced the bedlam of the rule of soldiers.

If that was indiscipline from uniformed persons who should know their limitations, the inflicting of injuries on a policeman by soldiers in Accra a few days ago was the highest point of such aberration.

Cpl Joseph Agbenyegah of the Kpeshie Divisional Police Command was beaten to pulp by some irate soldiers because he dared ask them to park off the road because they had caused a traffic jam. The soldiers, three of them, beat him up because they thought that being soldiers, they were above the law.

In an institution whose hallmark is discipline, we expect the relevant authorities to discipline the defaulting soldiers. It appears that some people join the military and the police without understanding the implication of their decision.

Soldiers, we think, should be taught more about how to conduct themselves when they are in uniform, especially when there is a misunderstanding between them and other security agents or even civilians.

The attack on the policeman under review is the umpteenth time such an unruly conduct is taking place. It took place in Tamale sometime ago and to date we do not know what happened to the soldiers who beat up some MTTU cops in the regional capital.

No wonder the policemen at the Kpeshie Divisional Command said they did not have confidence that anything concrete was going to come out of the case, especially now that the soldiers have been let off the hook.

With elections barely six months away, there is the need to educate both soldiers and policemen on how to conduct themselves and to especially understand the fact that they are required to serve the people and not to molest them.

We call on the military authorities to deal with this inappropriate conduct as a significant deterrent to others in the colours, lest a dangerous precedent be set. We should not allow a situation where policemen are compelled to call the bluff of unruly soldiers because they can no longer contain this nonsense.