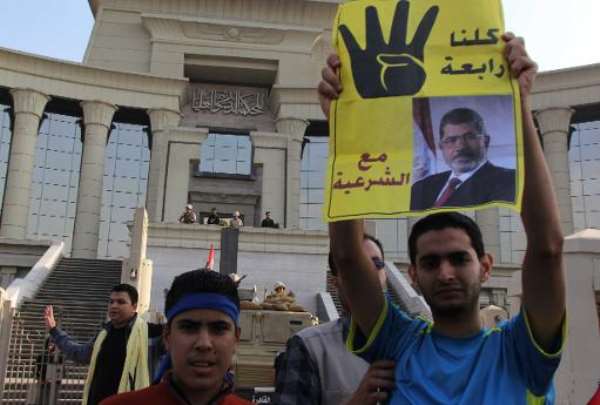 Cairo (AFP) - The trial of Egypt's ousted president Mohamed Morsi began on Monday in Cairo over his alleged involvement in the deaths of protesters during his year in power, state television reported.

It was Morsi's first public appearance since he was placed in detention on July 3 when the military overthrew him.

Presiding judge Ahmed Sabry Youssef has banned cameras and recording equipment from the makeshift courtroom at a police academy in east Cairo.

A security official at the hearing told AFP the proceedings had been slightly delayed because Morsi did not arrive wearing the customary white prison outfit.

The judge waited until Morsi changed his clothes, the official said on condition of anonymity.

Morsi's supporters, battered by a bloody and sweeping police crackdown, accuse the army-installed government of fabricating the charges and have called for protests against the military.

Morsi was flown in by helicopter to the police academy in the capital where the trial is being convened, and 14 co-defendants were also present, said Cairo security chief Osama al-Soghayar.

Outside the court complex, dozens of Morsi supporters were seen brandishing posters of the Islamist and anti-military signs.

Morsi, who the army has held at a secret location since his July 3 ouster, is accused along with the other 14 of inciting the murder of protesters outside the presidential palace in December 2012.

The charges against Morsi could lead to the death penalty or life in prison.

Egypt is on high alert for the trial, with 20,000 policemen to be deployed and authorities saying they are ready to deal with any violence.

With more than 1,000 people killed since Morsi's overthrow and thousands of Islamists arrested, hopes for a political settlement between the Islamists and interim government are slim.

"Morsi's presence in the court will definitely energise his supporters and raise possibilities of new protests and clashes," said Shadi Hamid of the Brookings Doha Center think-tank.

The trial is seen as a test for Egypt's new authorities, who have come under fire for their heavy-handedness.

"They should present Mohamed Morsi in court and grant him a fair trial, including the right to challenge the evidence against him in court," said Hassiba Hadj Sahraoui of rights watchdog Amnesty International.

"Failing to do so would further call into question the motives behind his trial."

But analysts believe the political nature of the trial will drive its outcome.

"This is first and foremost a political trial and an important one. There is zero chance of it being free and fair," said Hamid. "The trial is a clear reminder of a polarised Egyptian society at this moment of time."

On the eve of the court case, the interim government said Morsi would be tried "before a judge according to Egyptian penal code".

"Nothing extraordinary, nothing exceptional. He will have rights to have a free and fair trial," said foreign ministry spokesman Badr Abdelatty.

Morsi will be tried in a police complex in east Cairo where longtime strongman Hosni Mubarak is also being prosecuted.

Morsi's single year of stormy rule came to an abrupt end in a military overthrow after millions took to the streets to demand his resignation.

A senior leader of the influential and long-banned Muslim Brotherhood, his victory was made possible by the 2011 uprising that toppled Mubarak and propelled Islamists to the political foreground.

His stint in power as Egypt's first civilian to be democratically elected president was marred by political turmoil, deadly clashes and a crippling economic crisis.

In November 2012, Morsi issued a decree granting himself sweeping powers, prompting opponents to accuse him of failing the ideals of the anti-Mubarak revolution.

The decree was a turning point in Morsi's rule, launching the worst polarisation in Egypt's recent history.

A month later, deadly clashes erupted outside the presidential palace between supporters and opponents of the Islamist leader. Morsi is facing allegations of inciting that violence.

Accusing police of failing to protect the president, the Brotherhood called on its supporters to confront the protesters. At least seven people were killed in the clashes that erupted on December 5 last year.

According to relatives and the few officials who were given access to him since his detention, Morsi remains defiant.

Unlike his predecessor Mubarak, also on trial facing similar charges, he will not cooperate with the court, said the Islamist Anti-Coup Alliance backing Morsi.

The deposed president "does not recognise the authority of the court," it said in a statement.

His lawyers will attend the hearing only as observers, it added.