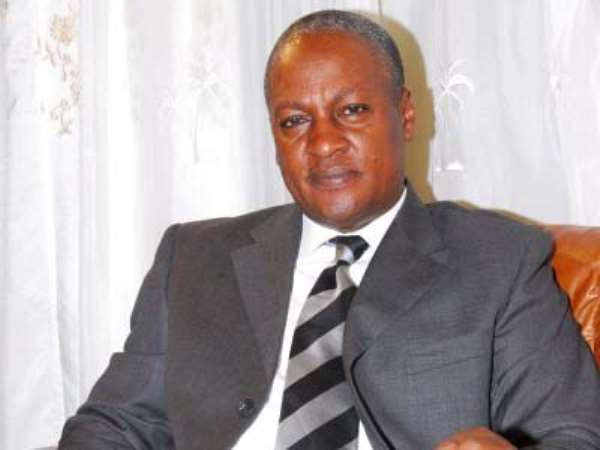 When Vice-President John Dramani Mahama pontifically declares that “No one has a divine right to rule” the country, I have absolutely no doubt in my mind, whatsoever, that the man is speaking first and foremost to himself, and then to the members, supporters and sympathizers of the ruling National Democratic Congress (NDC), including President John Evans Atta-Mills, of course (See “No One Has Divine Right to Rule” – Veep” Ghanaweb.com 6/22/12). And here, once again, we remind our readers that in the lead-up to Election 2008, the then-Candidate Mills vowed to reduce Ghana to a Kenya-type apocalypse in the event of the NDC being declared the loser.

Indeed, vigorously campaigning in his home-region of the North in 2008, the former Information Minister and mischievous architect of the “Shit-Bombing” tactic of intimidating privately-owned Ghanaian media enterprises, likened the country to a horse out of whose comfortable saddle the key operatives of the National Democratic Congress had been bumped. Mr. Mahama then went on to bitterly lament the nasty sandblast which he and his career political associates were experiencing under the 8-year tenure of then-President John Agyekum-Kufuor. He then solemnly vowed that once his NDC was returned to power, he and his Sogakope Mafia associates would ensure that they did not relinquish power anytime soon.

The preceding, of course, is primarily why I could not stop myself from laughing to hear the snake-oil salesman stake his all-too-realistic claim about Fourth-Republican Ghanaian democratic culture. And it is also all the more reason why the rather provocative and devious attempt by the Electoral Commission to create a bonanza of 45 more parliamentary seats, obviously to favor the ruling government scarcely six months to the December 7, 2012 general election, ought to be fiercely resisted by all genuine democracy-loving Ghanaians.

It is also rather a crying shame that the Vice-President has yet to muster the courage to duly credit the Danquah-Busia-Dombo ideological triad for having made “decentralization” a household vocabulary in Fourth-Republican Ghanaian political culture. Needless to say, there was a time between the late 1950s and mid-1960s, when the mere mention of the salutary need for a decentralized form of government was anathema and deemed a crime punishable by a long prison sentence by the powers that were. Back then, the very progressive and practical ideology of ordinary people and their invested traditional rulers taking charge of their local and regional affairs was inextricably associated with interethnic divisiveness and the outright destabilization of our national cohesion and integrity.

That, of course, was the era of Nkrumah's one-party dictatorship of the so-called Convention People's Party (CPP). Interestingly, Mr. Mahama, who now pretends to staunchly uphold the principles of Fourth-Republican Ghanaian democracy, is a veritable product of that bygone era and a brazen subscriber to the same, with his own father having served as a key administrative liaison between the Show Boy and the Northern Region. And, indeed, as clearly depicted at the beginning of this article, the Mills second-bananas continues to staunchly uphold and radically advocate the decidedly democracy-stifling ideology of “Nkrumaism.”

Well, I really don't know who the alleged “development partners” of the National Democratic Congress are with whom Mr. Mahama is reported to have recently held an annual consultative meeting and spoken to about the need for the “promotion of better engagement with traditional authorities and civil society “operatives to ensure a full realization of our collective national aspirations.” But one thing, however, is inescapable; unless and until all the “Hohoe Zongos” of Ghana are organically woven into the local and indigenous political fabric, and parochially minded chieftains like Togbega Gabusu VI are progressively reoriented to fully recognize all Africans resident in his paramountcy, irrespective of cultural and religious affiliations, as functionally integral to the development of his district of the country, Ghanaians had better abandon their imperious claims to being the lodestar/leaders of a united and progressive continental Africa.

Indeed, it is rather needlessly pathetic for Mr. Mahama to presume to lecture his political opponents and rivals on the far-reaching implications of Ghana's 1992 Republican Constitution, for someone who has staunchly and perennially supported the veritable dictatorship and the virtual reign-of-terror that was the Rawlings-led Provisional National Defense Council (PNDC) and the latter's vintage incarnation of the so-called National Democratic Congress. Rather, the Vice-President ought to be up and about the electoral strongholds of the NDC organizing civic-education clinics and lecturing his core constituents about what it means to sign onto a democratic culture of governance.

*Kwame Okoampa-Ahoofe, Jr., Ph.D., is Associate Professor of English, Journalism and Creative Writing at Nassau Community College of the State University of New York, Garden City. He is Director of The Sintim-Aboagye Center for Politics and Culture and author of “Selected Political Writings” (Lulu.com, 2008). E-mail: [email protected]