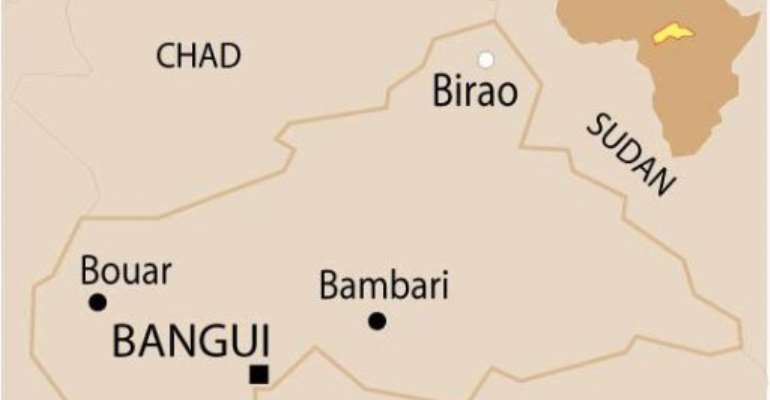 A military source said the rebels were believed to be members of the Chadian rebel Popular Front for Recovery (FPR). By (AFP/Graphics)

BANGUI (AFP) - Rebels attacked and looted a plant operated by French nuclear giant Areva near a uranium mine in the southeast of the Central African Republic, army and French diplomatic sources said Monday.

Officials said no Areva employees were killed or wounded but one military source said one villager was killed by the gang near the Bakouma mine before Sunday's attack.

"A violent clash yesterday afternoon pitted" Central African troops against "an unidentified group of armed men attempting to launch an assault on the site of mining company Areva," a military statement said.

"The enemy did some material damage and pulled back while taking a sizeable quantity mainly of food with them," Lieutenant-Colonel Jean Ladawa said in the statement, which was read on national radio.

"For the moment, it's difficult to establish a casualty toll from the fighting. However, we sustained no losses either among personnel or the population at Bakouma," he said.

Areva in Paris confirmed an attack had taken place in Bakouma.

"Some food supplies as well as computer equipment were stolen," a spokesman said. "Nobody was threatened and nobody was wounded."

A military source in Bangui, who asked not to be named, said that the raid had claimed no victims but operations were under way "to neutralise this group of armed men, who are believed to be members of the Chadian rebel Popular Front for Recovery (FPR) led by 'General' Baba Ladde."

The FPR has been active in the Central African Republic since 2008.

Last January, the Central African army attacked FPR positions in the north, about 400 kilometres (250 miles) from Bakouma, and announced that they had contained the rebels.

"A few hours before the clash, these armed men killed a villager 25 kilometres from Bakouma. They took hostage an elder and a young man who served as their guides," the source said.

According to another anonymous official, the rebels "are not on the (Areva) site, but they are still in the Bakouma zone. They are heavily loaded (after looting) and they are trying to recruit porters."

A French diplomatic source told AFP that five French Areva staffers at the uranium mine were in contact with French authorities to find "the most suitable solution" for them.

In September 2010, seven people employed by Areva and its subcontractor Satom -- including five French nationals -- were captured by Al-Qaeda's North Africa franchise in Niger. Four of them are still held.

In November 2011, Areva delayed the launch of mining operations at Bakouma after uranium prices fell in the wake of the Fukushima nuclear disaster in Japan.

About 170 people were then working at the Bakouma site but the Areva spokesman in Paris said Monday that only around 15 people had been working there recently.

With an estimated 32,000 tonnes of uranium to be mined, the site is considered important by Areva, even if it does not match the 180,000 tonnes of the giant Imouraren mine in Niger.

A 2008 peace process led to accords with most of the rebel groups in the country who have laid down their arms, but the Central African Republic remains prey to armed groups including rebels, highway robbers and poachers.