HAS GHANA BEEN BETTER UNDER THE BETTER GHANA AGENDA? 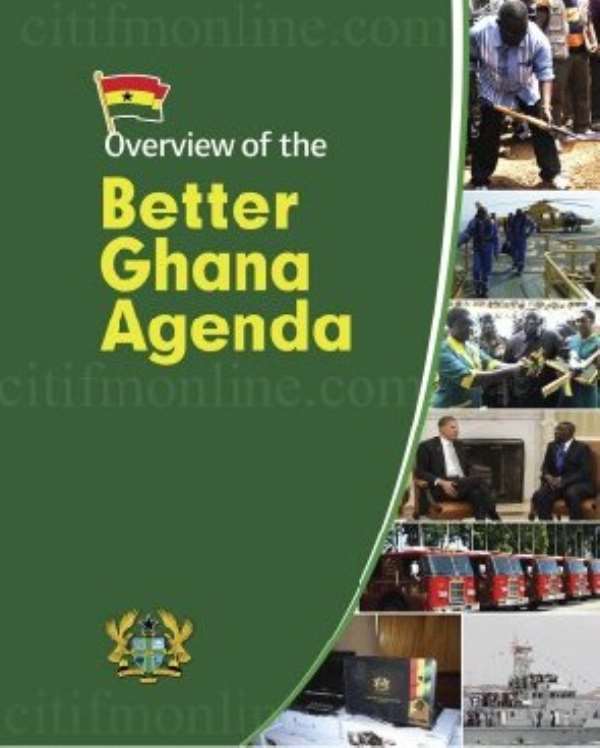 The stakes are high and tension is rife in this December general election. Some political pundits have described the upcoming election as one that will determine the fate of this country in regards to our democratic credentials, economic growth and development as a country. I argue strongly that it will be one that will affect each and every one of us.

Our destiny and that of the next generation are tied to this election, it is either we make or break as a country. We break not because this country might be plunged into chaos, but the life of the mass of our people will further diminish due to bad economic policies, gross-mismanagement and leadership-paralysis or we opt for fresh thinking and new ideas. We will need a courageous, no-nonsense, dedicated, hard working leader who has high expectations of the Ghanaian people, a leader who inspires confidence. The December election must produce a leader who has the support of ordinary, decent, hard-working Ghanaian men and women – a leader who is able to deliver his promise.

In view of this, those of us (electorates) casting the votes will have to do a lot of critical thinking; the choice we make in the voting booth will not only affect us but our siblings, uncles, aunties, friends and everyone we hold dear.

This election certainly is going to be about jobs for the people, better healthcare system, education, and infrastructural development, i.e. the basic things that matter to ordinary Ghanaians. Bread and butter issues mean a lot to our people than mere rhetoric and populism, which are only geared towards courting public sympathy for electoral purposes.

Ghana will need a government with a spending plan, a government which can spend without getting our economy fundamentals badly wrong such that the cedi is under constant intense pressure, prices soaring as the economy spirals out of control leaving Ghanaians in debt and scraping to make a living. We badly need a government committed to spending on education, inner cities, health care, social security, and job training and target whopping 33 percent increase of spending in the next four years and public safety spending going up by 53 percent such that lawlessness, crime will go down considerably. Who else can do this better but a team of considerable experience, with expertise and recent experience in managing run-away inflationary economy successfully?

It is important that we hold the present NDC regime accountable for its stewardship and measure its performance and ask ourselves if they are worthy of another mandate or be subjected to the bin of political history. Has Ghana been better under the “better Ghana agenda” so described by the NDC government and its apologists? Those are some of the questions I shall endeavour to discuss in the unfolding paragraphs of this piece.

One would have thought that, following the standards and economic gains of the Kufuor administration, the NDC will built upon to the robust economy NDC inherited to propel growth in the economy , lower the cost of living and increase the standard of living of the average Ghanaian. However, that is far from reality. Ghanaians under the Kufuor administration were better-off than the Mills-Mahama administration. There is no steady and sustained economic recovery in today's Ghana. Just off the hook, try and error economics as the NDC has downgraded growth rate by a massive 10% within one year. We were expecting with the discovery of oil a 21% growth- rate, and then it was revised downwards to 14%, now we are hovering around 11%. If this is not try and error, tell me what is.

There is no doubt that one was better-off when a wife/daughter had free-maternal healthcare, we were better-off with a well-managed Free National Health Insurance Scheme (NHIS), certainly much better-off when a son/daughter enjoyed free basic education, better-off under the School Feeding Programme, and were better-off when a son/daughter/ yourself had a job or training under the National Youth Employment Program (NYEP); just to mention a few programmes which were viable but now in disarray under the NDC administration. We need to ask ourselves over and over again; what have become of all these social interventions? These are relevant questions Ghanaians must consider in arriving at that crucial decision of making a choice between progress and regression in the next election in my view.

At a time when most economies around the globe are crumpling and struggling to wane themselves off recession; economic management has become cardinal to every governance system. This has urged countries to resort to capable hands with remarkable economic management skills that can stabilize their economies and place them on massive socio-economic transformation, and Ghana must not be an exception.

Interestingly, the Mills-Mahama administration since its inception has made blame-game their stock in trade. Even in these their last days in government, they continue to blame the Kufuor administration for their own failures and gross- incompetence. Perhaps, they ought to be reminded that, their bond with Ghanaians were to make it better and not “talk the talk” but “walk the talk”.

I have on several occasions heard some government appointees advanced the argument that the Kufuor administration, due to excessive borrowing, incurred a huge public debt stock, left the economy in a calamitous state and under intensive care. These assertions flies in the face of reality as one can visibly see the tremendous infrastructural development across the country during the Kufuor era and one can easily compare the Mills era with Kufuor era. In fact, there is no basis of comparison as the difference is clear and visible and more so can be felt. Just look at the squeeze on the living standards of ordinary, hard-working Ghanaian, look at the job losses in our towns and cities, look at the frustration in the eyes of the average Ghanaian, look at the crime level, violence and lack of inspiration from government. Why should the Mills-Mahama merry-go-round not be truncated?

It is interesting to note that in less than 4yrears of the Mills-Mahama administration the public debt stock has increased dramatically from GH¢8.8 billion in 2008 to GH¢25.8 billion as at April 2012 which far exceeds the total public debt accumulated by successive governments since independence.This borrowing spree is extraordinary in the history of our country, and what makes it frightening is the fact that there is nothing substantive to show for it. I wonder how they will describe such an ailing economy; perhaps, a dead economy waiting for resurrection.

If the NPP could leave a public debt stock of GH¢8.8 billion in 2008 with visible massive infrastructural development across every sphere of the economy; the NDC in just less than four years could accumulate a whooping GH¢25.8 billion from GH¢8.8 billion in 2008, which represents a 187.5% increase over the 2008 total public debt level bequeathed to them with apparently nothing to show for it; who then is the prudent manager of the economy among the two? A question Ghanaians must analytically ponder on.

There is a total breakdown of our governance machinery, with every government appointee acting with impunity and blatant disregard for structure and procedure which has gradually plunge d Ghana into an abyss.

I want to reiterate that unemployment is on the record high, standard of living is difficult to bear despite single digit inflationary figures being bandied around all over the place, communal conflict is on the wide spread, gargantuan corruption institutionalized, dire economic indicators such as the over-speeding depreciation of the cedi, reckless expenditure, and nonchalant and lies infested leadership which have become the new order of the day.

The consistent inconsistency of the Mills-Mahama administration is undeserving of another mandate and Ghanaians must begin to read between the lines; it is propaganda against reality of life. The test obviously is in the pudding. We must defeat mediocrity, Ghana must move forward!