Is Kweku Baako, a hero or a villain? 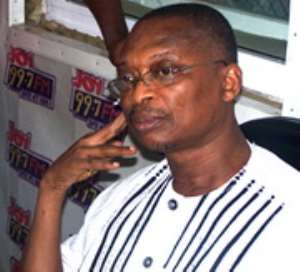 Kweku Baako is arguably one of the most popular journalists in Ghana. Even though his name evokes varied sentiments and reaction, he also possesses that innate ability to charm people with his palpable candor, forthrightness, attention to detail, quick analytical turn of mind and above all a proclivity for controversy.

To say that he has an inordinate appetite for controversy is to state the obvious. Kweku Baako thrives on controversy.

In the week under review, he courted loads and loads of controversy when he published information he said he had obtained or in his words “intercepted” at the offices of the Police CID. The intercepted documents bordered on statements Mr. Alfred Woyome allegedly made to the CID following his days of incarceration by the crime unit earlier this year.

For Baako the methodology of “intercepting documents” which he dutifully applies in his line of work should not matter so long as that information lies within the bosom of the public's right to know. In the ever changing face of global journalism being pioneered by the likes of Julian Assange's Wikileaks and websites likes smoking gun.com and others, is the media institution in Ghana ready to give a wholesale endorsement to the practice of “intercepting documents” in the name of the public's right to know or gaining an important scoop

Whatever the answer is, we must make the point that beyond the quest to satisfy the public's right to know or scooping the competition we must also be mindful of our overriding obligation as journalists to protect the integrity of our sources and that of the profession as well. Making the extra effort to achieve this important balance cannot be overstressed at all. This is an imperative.

As a journalist with over three decades of experience under his belt, Mr. Baako has played a vanguard role in the struggle to lionize the Ghanaian media and to open up the space for free and unfettered public discourse in this country.

He is a stoic believer in the freedom, independence and responsibility of the media and has been jailed on two occasions in the exercise of his belief firstly by the PNDC government and then later under the NDC government.

A one time friend of the Rawlings family, Baako parted company with the Rawlingses and firmly ensconced himself in the camp of the opposition parties where he worked diligently to ensure regime change albeit peacefully.

Following the defeat of the NDC in the 2000 elections, which was won by Candidate J.A Kufour of the NPP, Mr. Baako took a principled stance to become an apologist of sorts for the incoming administration and even openly swore to do all he could to keep the NDC in perpetual opposition. By choosing to place his professional competencies and acumen in the defense of the Kufuor government, Baako succeeded in pioneering a brand of journalism in this country that promoted unbridled loyalty to a political party or government without sacrificing the cardinal journalistic principles of fairness and objectivity.

Baako's position might not sit well with the purists within the media fraternity who insist on a holistic and a complete separation in the work of the media and the government. And to this extent, Baako's decision to use his appearance on various media platforms to defend the Kufuor administration must be respected by all even though it has very glaring ethical undertones.

Principles define people and in our part of the world where people find it awfully difficult to take a principled stance on topical matters, Mr. Baako has stood his ground in the face of mounting criticism from his political opponents and media colleagues.

This is worthy of my veneration and I applaud him for sticking to his principles.

Personally I disagree with this brand of journalism. I think that Ghana would be best served if we have an independent media that is not beholden to any entity. In this respect I agree with the dictum that says that “there must necessarily be an adversarial relationship between the media and the government.”

Another area I disagree with my senior colleague relates to the manner in which he frames his attributions. After a successful document interception escapade, ethically you need not tell the whole world how you came about those documents. Sometimes as journalists we rush to use a phrase like “documents intercepted by our investigative” just to play up our own self importance. I think these ego stoking and show offish ventures must be discouraged because they serve no salutary purpose whatsoever.

For those of us who cut our teeth as journalists in the stables of the Ghanaian Chronicle under the astute guidance of Kofi Coomson, Ebo Quansah, Mohammed Affum and the late Ebenezer Kesse Antwi (Steve Biko) intercepting official documents was our second nature. Having this skill was a fundamental critical block in your progression as a full bloodied journalist in the Chronicle group of newspapers.

Without it you didn't have a chance of surviving the rigorous, demanding and highly competitive Chronicle newsroom.

Always the consummate task master, the Publisher and the Editor-in-Chief of the nation's most influential investigative broadsheet, Mr. Coomson ensured that his staff was resourceful and efficiently skilled in this much maligned news gathering methodology called “intercepting of documents.”

However after acquiring the documents we were trained to couch our attribution in such a way as not to give away the identity of the source. In this regard, Chronicle reporters were orientated to steer clear of attributions such as, “sources at the Castle”, “persons close to the investigations told us”, “our contacts at the Presidency”, etc when you do stories from “intercepted documents.”

To the contrary, the Chronicle house style dictated that instead of the above attributions that tend to unmask the source using phrases like “the chronicle gathered”, “the chronicle has learnt”, “Chronicle can reveal that”, helps in keeping the integrity and identity of our contacts intact. This approach while lending credibility to the story and by extension the journalist and his news company also protects the source from any form of suspicion or pressure from his employers.

This was how we did it at the Chronicle. Personally it helped some of us avoid the many pitfalls and traps that befell colleagues from other media houses. By couching our attributions more intelligently, our sources became more emboldened having the full assurance that they were dealing with professionals who would not sacrifice their identity in an ego massaging stunt.

Indeed if you are to survive in the business of selling information it is important to possess and to ulitise the skill of intercepting all sorts of documents firstly to satisfy your obligations to the people of Ghana and secondly to secure the bragging rights in the competition.

And that is exactly what Mr. Kweku Baako did. Unfortunately after getting his scoop and to underscore the credibility of his paper, Mr. Baako did the unthinkable by making a judgment to attribute the story to documents his paper had intercepted.

I think that this singular decision by Mr. Baako to source his story to the so-called “intercepted documents” was quite unfortunate. If he has calibrated his choice of words better and not gone gung-hoe, the police CID would not be seeking for one of its people to make an example of.

Unfortunately by choosing to go the way he did, Mr. Baako has put the career of his source(s) in grave danger and this could potentially have serious consequences for journalism and accountable government in this country. The worst outcome from this situation is that it could scare potential sources from dealing with the journalism community, which would invariably affect the quality of stories the media churns out.

Power has the ability of making a person delusional. In the political sphere the use of unbridled power has brought about conflicts and other forms of instability. The media is not impervious to this threat. While it is important to gain access to documentary evidence to promote our constitutional mandate of informing the citizenry and holding the government accountable at all times we need to balance it with a degree of professionalism as well.

Being gung-hoe and show offish is not the way to build a sustainable relationship between the media and our sources. However the way forward is for us to be more circumspect in our use of the power we have been clothed with by the fourth republican constitution.

Being the fourth estate of the realm we have an obligation to think soberly so that we can act brazenly in defense of the public's right to know. The media like any other human institution is not immune from acting in a delusional manner and the sooner we accepted this reality the better it would be for all of us.

As a reputable journalist of good standing, Mr. Baako needs to be told to back down from the overt use of the phrase “documents we intercepted” and other suggestive phrases like this in the future. He has an obligation to act in a manner that reflects professionalism. A journalist is as good as the source who supplies the story and we are obliged to protect our sources at all times and one way to do that is to hide their identity by couching our attributions more craftily. This is a steep learning curve that all media practitioners in this great country have to negotiate going forward.

*The writer is a Freelance Journalist, an Author and the Executive Director of the Center for Investigative Reporting Ghana (CIRGHA). He lives in the Ghanaian capital of Accra.