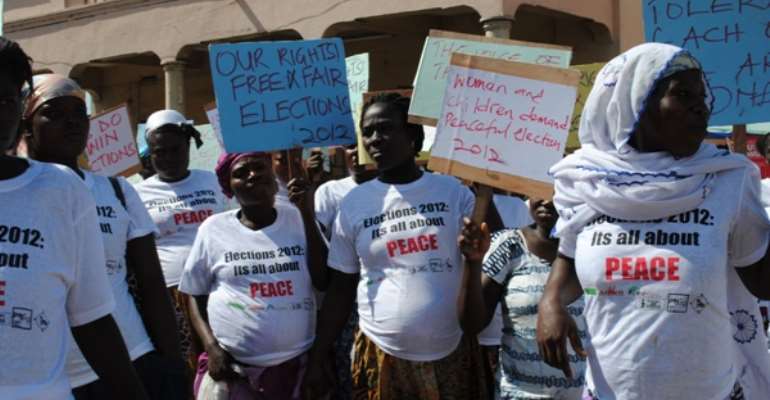 Accra, June 22, GNA – About 50 pregnant women around James Town, a suburb of Accra on Friday embarked on Election 2012 Peace Walk to draw attention to the plight of women and children during conflicts.

The walk which was on the theme: “Promote Health Rights and Accountability in a Peaceful 2012 Election,” aimed at sensitizing pregnant women on their contributions to a peaceful 2012 election.

It also aimed at urging politicians to adhere to the Political Parties Code of Conduct for Election 2012. “We must hold them to their pledge of making 2012 election violent-free,” Nii Ankonu Annorbah Sarpei, Acting Executive Director, Centre for Community Studies Action and Development (CENCOSAD), an NGO, stated at the end of the walk.

The peace walk organised by CENCOSAD in collaboration with James Town Maternity and Alliance for Reproductive Health Rights (ARHR) saw pregnant women from the James town maternity home in Accra walk from Palladium through the high streets of Accra.

Mr. Raymond Tettey, Assemblyman for the Ngleshie Electoral Area called on the pregnant women to serve as watch dogs on their husbands to ensure that they did not indulge in things that could generate into violence in the up-coming election.

“In violence, pregnant women should note that their husbands could be injured arrested or die as a result, a situation that would create a lot of inconveniences for them and their children,” he added.

Ms Cecilia Limangsiab Dam, Civic Education Officer from the Metro Office of the National Commission for Civic Education admonished the women to advice their husbands, siblings, and the youth to desist from being used by politicians as tools of violence.

Ms Edem Keteku, a Principal Nursing Officer at the James Town Maternity in an interview with the Ghana News Agency (GNA) explained that the walk was symbolic and very important because it had given pregnant women, the most vulnerable in violent situations the opportunity to add their voices to the peace campaign in the run-up to Election 2012.

Some pregnant women also told the GNA that they were happy for the opportunity to impress on all stakeholders the need for peace in the general election. “The peace of a nation is paramount to its development, women, children and vulnerable groups.

“In war situations we would not have access to healthcare services and other basic needs, we cannot even walk to a refugee camp, please look at our condition and ensure that Ghana remains united after December 7th” the women stated.

The peace walk was funded by STAR-Ghana, a multi- donor pooled funding mechanism (Funded by DFID, DANIDA, EU and USAID) to increase the influence of civil society and Parliament in the governance of public goods and service delivery, with the ultimate goal of improving the accountability and responsiveness of Ghana's government, traditional authorities and the private sector.