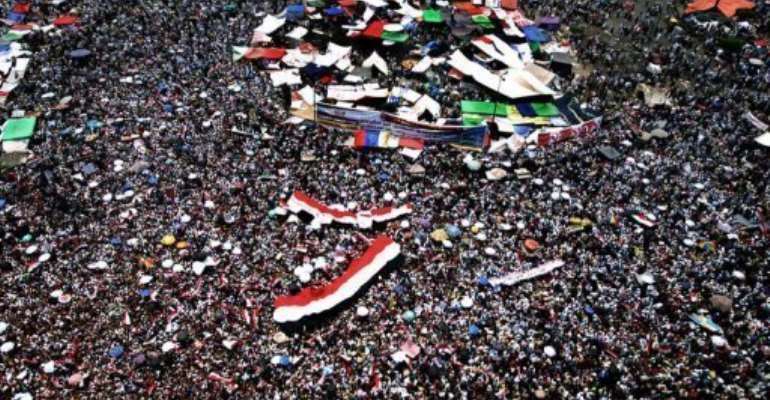 CAIRO (AFP) - Egypt's Muslim Brotherhood expects its anticipated presidential election win to be respected, its candidate said on Friday, after the ruling military threatened to deal "firmly" with any unrest.

The Brotherhood wants neither "confrontation nor violence," as the country nervously awaits the official result of the divisive June 16-17 poll run-off, its standard bearer Mohamed Morsi said.

But he added: "The expected result is known to everyone. We will not allow anyone to tamper with the result."

Both Morsi and his challenger ex-premier Ahmed Shafiq have claimed victory in the election for a successor to ousted strongman Hosni Mubarak, sparking tensions between the rival camps that have deepened after the electoral commission delayed its announcement of the official outcome.

Morsi spoke after the ruling military warned that it would deal "firmly" with any attempt to harm the public interest as thousands of people packed Cairo's Tahrir Square accusing it of a power grab.

The Supreme Council of the Armed Forces (SCAF), which took over when Mubarak was ousted by a popular uprising in February last year, also delivered veiled criticism of the Brotherhood, charging that efforts were afoot to pre-empt the election result.

But it insisted that it remained neutral in the run-off between Morsi and Shafiq, who served as Mubarak's last prime minister.

"Protecting the status of state institutions is a national responsibility for all. Any attack on them threatens the stability and national security of Egypt," said a SCAF statement read on state television.

"Any attempts to harm public or private interests will be confronted with utmost firmness and strength by the police and armed forces within the law."

The SCAF defended a constitutional document giving it legislative powers, control over the new constitution and a broad say in government policy as a "necessity."

"The issuing of a constitutional declaration was a necessity imposed by the needs of managing the affairs of the country during the current critical phase of the history of our nation," it said.

The Brotherhood had claimed victory just hours after the close of polls, but its subsequent release of provisional results given to both candidates by returning officers drew criticism from the SCAF.

"The early release of the presidential election results, before the announcement by the responsible body, was unjustified and is one of the main reasons for divisions and tensions in the political arena," the military said.

But the SCAF also insisted in its statement that it stood "at equal distance" from all political forces.

Protesters used umbrellas, newspapers and hats to shield themselves from the strong sun as they chanted "Down with military rule!"

Cleric Mazhar Shahin, dubbed the preacher of the revolution, called on the military to cancel the constitutional declaration that gave it sweeping powers and to reverse a decision granting the army powers of arrest.

He warned that any hint of fraud in the election results would be "confronted by the people by all means that are peaceful," raising fears of unrest in a country exhausted by 18 months of political upheaval and insecurity.

The race has polarised the nation, dividing those who fear a return to the old regime under Shafiq's leadership from others who want to keep religion out of politics and fear the Brotherhood would stifle personal freedoms.

The Brotherhood has been holding crisis talks with the country's political forces for days, as it braces for a showdown with the military.

In the months following Mubarak's resignation in February last year, the Brotherhood lost the support of revolutionary groups, who accused the Islamist group of trying to monopolise politics.

But the power grab by the army has given the Brotherhood a new opportunity to reach out to them.

Morsi spoke by telephone with Nobel laureate and reform campaigner Mohamed ElBaradei, as well as with former presidential hopeful Abdel Moneim Abul Fotouh ahead of the protests, said the Freedom and Justice Party, the Brotherhood's political arm.

The SCAF's assumption of legislative powers after a court ordered the Islamist-led parliament dissolved rendered the president's post toothless.

French Foreign Minister Laurent Fabius called on Friday for the choice of the Egyptian people to be respected.

"I am concerned by the institutional developments of recent days in Egypt, following the first free presidential election that should mark a decisive step towards establishing a democratic regime," Fabius said.

"The choice of the Egyptian people must be respected."