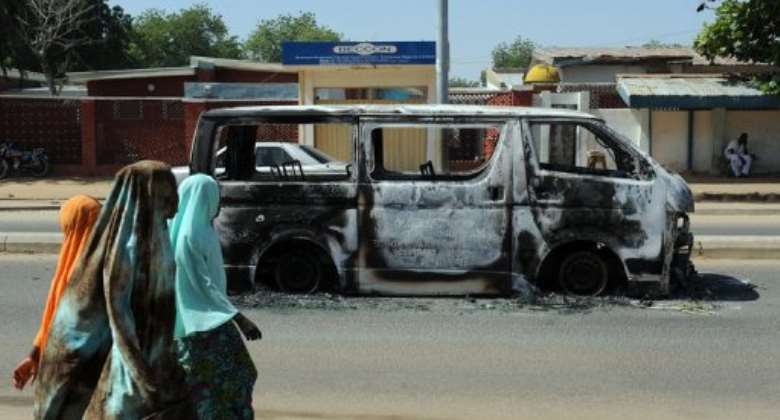 Young girls walk past a vehicle burnt in 2011 on a street in Damaturu in northeastern Nigeria. By Pius Utomi Ekpei (AFP/File)

KANO, Nigeria (AFP) - Nigeria's Khalid al-Barnawi, labeled a "global terrorist" by the US government Thursday, is alleged to be an Al Qaeda-linked militant with Boko Haram ties involved in kidnapping foreigners.

The US State Department described Barnawi and another Nigerian militant also given the terrorist designation, Abubakar Adam Kambar, as tied to Boko Haram and with "close links to Al-Qaeda in the Islamic Maghreb," or Al-Qaeda's north African branch.

According to a source close to Nigerian Islamist group Boko Haram, Barnawi is thought to have run a militant training camp in the Algerian desert and was involved in the kidnapping of foreigners in Niger and in Nigeria.

Those kidnappings included the abductions of French nationals in Niger and of a Briton and an Italian in Nigeria last year near the border with Niger, according to the source.

The source said Abu Mohammad, the alleged mastermind of the kidnap of the Briton and the Italian, trained at the camp under Barnawi. Abu Mohammad died in custody in March after suffering gunshot wounds in a raid in northern Nigeria.

The same source alleged that Abu Mohammed and Barnawi formed an alliance with the faction of Boko Haram led by Abubakar Shekau, also designated a "global terrorist" on Thursday, after Mohammed returned to Nigeria.

Under the alliance, Mohammad and his group were to carry out abductions for ransom, part of which would go toward financing Boko Haram operations. Boko Haram would in turn provide security cover for Mohammad's group.

Barnawi is said to have feuded with an Al-Qaeda "spiritual adviser" at the training camp, particularly over the kidnappings in Nigeria. According to the source, Barnawi planned the kidnappings without Al-Qaeda consent.

Not much is known about Barnawi's background, though he is thought to be in his 30s and have been born in Maiduguri, the northeastern Nigerian city that has been Boko Haram's base.

The other militant given the terrorist designation, Abubakar Adam Kambar, believed to be in his mid-30s, is also thought to be from Borno state, where Maiduguri is located.

According to the source, Kambar had previously been an active member of Boko Haram when it was led by Mohammed Yusuf, head of the group at the time of a 2009 uprising who was killed afterward.

Kambar is believed to have been a Yusuf ally who took part in the uprising, which was put down by a military assault, and later disappeared. According to the source, he found his way to Algeria, where he is suspected to have linked up with Barnawi.