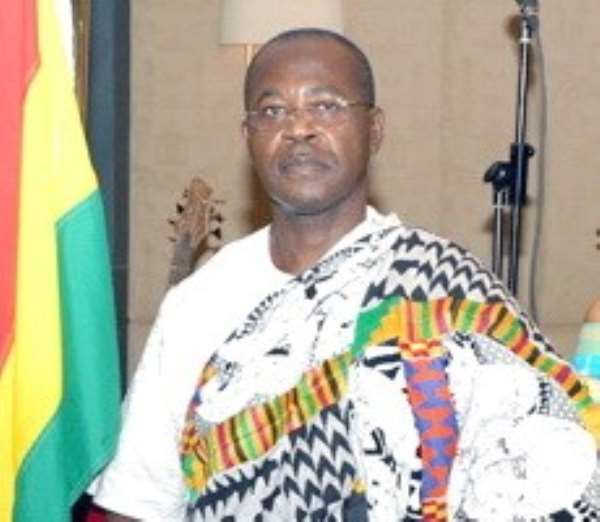 Ghana's High Commissioner to the United Kingdom, Professor Kwaku Danso-Boafo has assured the business community in the United Kingdom that irrespective of whoever wins this year's elections, the safety and security of their investment is assured because there will be peace and harmony in the country.

Addressing members of the Conservative Africa Business Group (CAB Group), comprising Honourable Members of the U.K. Parliament with business interests and businesspeople at the Palace of Westminster last Thursday, June 14, Prof. Danso-Boafo said currently, as Ghana prepares for her sixth election since the return to constitutional rule, there is no doubt that it would be free and fair because the country has a record of successfully conducting five successive elections all of which were internationally acknowledged as free and fair.

He said he was happy since his last meeting with members of CAB Group in 2009, Ghana and the United Kingdom have continued to enjoy a very good political, economic and cultural cooperation which is growing from strength to strength for the mutual benefit of the two countries.

Economic Challenges
Prof. Danso-Boafo noted that even though there have been some challenges in the global economy and in particular the on-going financial turbulence in the Euro zone, the Ghanaian economy under the leadership of His Excellency President John Evans Atta Mills has remained resilient due to the pursuit of prudent fiscal and monetary policy measures.

The Ghanaian economy has endured the current economic turbulence again due to the maintenance of peace and promotion of good governance and the benefit of improved commodity prices for some of Ghana's major exports, he emphasised.

Inflation, he said, has dwindled from 18.1 percent at the end of 2008 to 8.60 percent by December 2011. It has however gone up to 8.8 percent in March and 9.1 percent in April this year but serious efforts are made to maintain it under the single-digit regime, he added.

On the money market, Prof. Danso-Boafo said the reduction in the yield of the 91-day market instrument from 24.67 percent in 2008 to 9.1 percent currently, makes it the lowest recorded money market rate in decades.

On the value of the Cedi, he said, the currency has been relatively stable over the last two years but has begun to experience depreciation due to some factors which include the acceleration in GDP growth from 4 percent in 2009 to 14.4 percent in 2011, increasing economic activities leading to higher demand for imports.

Another reason for the decline in the value of the cedi, the High Commissioner said, is the rising volume of trade with China, which has changed the demand pattern for foreign exchange. This is because imports from China are predominately paid for in cash rather than LCs which spreads payments over time, resulting in increased reliance on foreign exchange leading to pressure on the cedi.

Speculation by foreign exchange traders has also contributed to the pressure on the cedi, hastening the depreciation rate of about 5 percent in the first quarter of the year which the central Bank of Ghana has taken remedial measures to deal with.

Business Environment
Prof. Danso-Boafo said Ghana's business environment continues to improve according to the World Bank and International Finance Corporation (IFC) sources, which said Ghana moved up ten places from number 77 to 67 out of 183 countries in their business friendly survey.

The same source, he said also ranked Ghana as the best place to do business in West Africa while after the listing of Tullow Oil on the stock exchange, it placed Ghana as the third largest Stock Exchange after South Africa and Nigeria.

With the increase in the number of Banks in the country from 16 to 30, Ghana, Prof. Danso-Boafo said became one of the fastest developing financial sector while the aviation industry, despite the recent unfortunate incident, has witnessed a 100 percent increase in international airlines from 16 to 32.

Foreign Direct Investment (FDI)
His Excellency, Danso-Boafo told his hosts that Ghana's political stability, peace and improved business environment, have all contributed to promote significant levels of investment in the country.

Oil and Gas Industry
Prof. Danso-Boafo said, Ghana has learnt a few lessons from other oil producing countries and has put in place the necessary legislative structures to manage the country's oil resources.

Government, he said has embarked on capacity building programme to train Ghanaians, both locally and in overseas Universities with other initiatives also underway to utilise the Gas accompanying the oil for power generation, fertilizer manufacturing and manufacturing of allied products.

He said it was in line with this that the 2012 budget was themed “Infrastructure Development For Accelerated Growth And Job Creation” to improve on existing infrastructure and the construction of new ones such as roads and highways, railways and power generation facilities.

Government has also accelerated the provision of social infrastructure such schools, water and rural electrification to bring development to the door-step the rural communities, Prof. Danso-Boafo said adding, “these and other initiatives provide very good opportunities to investors with attractive incentive package”.

The Chairman of the CAB Group, Hon. Laurence Robertson, a member of the House of Commons, thanked Prof. Danso-Boafo for giving the group an update of the Ghanaian economy.

He said, as investors, they have keenly followed Ghana's economic progress over the years and hoped with the insight given by the High Commissioner, members of the group would take advantage of the opportunities offered by the Ghanaian economy and invest in the country.