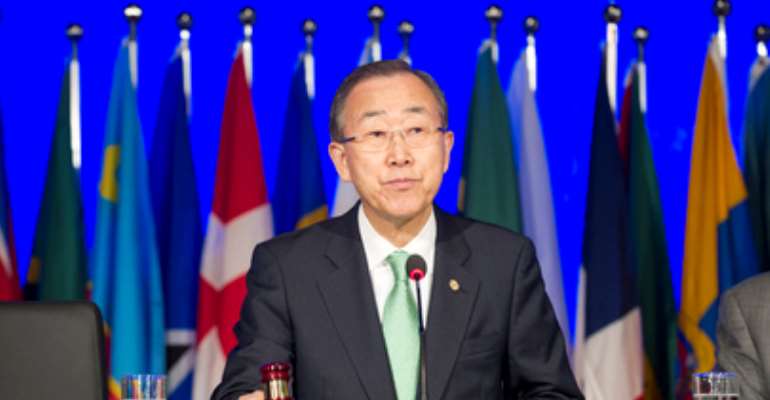 In preparation for the UN Conference on Sustainable Development in Rio, African heads of state and ministers have been meeting on a consensus response. Africa's priority areas are highlighted below.

Agricultural productivity and food security
Agriculture employs 60 per cent of Africa's labour force, while three-fifths of farmers work at a subsistence level. Africa still relies on rain-fed agriculture, making it vulnerable to harsh weather conditions, including climate change. African leaders have committed themselves — through the Comprehensive Africa Agriculture Development Programme (CAADP), adopted in July 2003 under the framework of the New Partnership for Africa's Development (NEPAD) — to allocate at least 10 per cent of national budgets to agriculture. They also aim to boost growth in agricultural production to at least an average 6 per cent a year.

Water
Africa is a dry continent, second only to Australia. Around 340 million Africans have no access to safe drinking water, about 40 per cent of the world total. Estimates indicate that only 26 out of 53 African countries will meet the Millennium Development Goal (MDG) of halving the percentage of the population without access to safe drinking water by 2015. Uneven water distribution is one problem. According to the UN Environment Programme (UNEP), harvesting rainwater could provide water for 520 million Africans.

Hazardous wastes
Africa's infrastructure and land use planning are unable to cope with the rapid growth of urban areas (currently 3.5 per cent per year), adding to the discharge of wastes in water and other uncontrolled places. African leaders have asked the international community to support the transfer of knowledge and technology for environmentally sound management of wastes. They also want support to strengthen capacity to control imports and exports of wastes into and within Africa.

Climate change
Africa accounts for only 2-3 per cent of the world's carbon dioxide emissions, most of which come from five countries — South Africa, Algeria, Egypt, Libya and Nigeria. While it contributes relatively little to global greenhouse gas emissions, Africa's low adaptive capacity makes it more vulnerable to the impacts of climate change. If the greenhouse gas emissions are not curtailed, scientists agree, average global temperatures could rise 4-5o centigrade within a century, which would be calamitous, according to the Intergovernmental Panel on Climate Change.

Energy
Of the 1.4 billion people worldwide without access to energy, 40 per cent are in sub-Saharan Africa. The continent's energy development lags behind the growth of its population and socio-economic needs, according to a NEPAD report. In sub-Saharan Africa, traditional fuels, such as firewood, constitute two-thirds of energy consumption. African leaders have endorsed a 10-year programme on sustainable consumption and production to enhance the efficient use of energy resources.

Sustainable tourism
About 7.7 million people are employed in Africa's tourism and travel sector, according to the UN World Tourism Organization. In 2004, NEPAD approved a Tourism Action Plan to make Africa the “21st century destination.” There are plans to invest in major projects likely to generate spin-offs and enhance Africa's economic integration. Tourist arrivals in Africa grew 8.8 per cent in 2009-2010, the highest rate for any region. Morocco, Angola, Cape Verde, Madagascar, Egypt and South Africa are recording double-digit growth, while Tanzania and Mauritius are not far behind.

Education and health
Many African countries are on track to achieving the MDG target of universal primary education by 2015. Burundi, Ethiopia, Ghana, Kenya, Mozambique and Tanzania have abolished school fees for primary education. However, 30 million children, mostly girls, still have no access to education and there is an acute need for more trained teachers.

Many African countries face a high prevalence of malaria, HIV/AIDS and non-communicable diseases such as cancer, diabetes and cardiovascular ailments. In 2008 Africa accounted for half of the world's 8.8 million child deaths. But there is also good news. Since 1990, under-five mortality in sub-Saharan Africa has declined by 22 per cent.

Ecological degradation
Since 1990 sub-Saharan forest lands have decreased by 3 per cent. Approximately 50 per cent of Africa's eco-regions have lost 50 per cent of their areas to degradation, cultivation or urbanization, according to UNEP. Africa still has over 2 million square kilometres of protected areas. Nevertheless, the continent's coastal areas continue to confront problems associated with oil and mineral extraction, uncontrolled fishing, mismanagement of mangrove forests and coastal development.