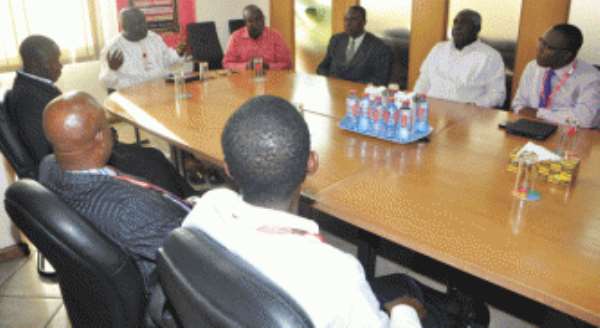 Mr Kenneth Ashigbey (hand raised) Managing Director of the Graphic Communications Group Limited in a discussion with a delegation of the Ghana Printers and Converters Association, which called on him in Accra. The Ghana Printing and Paper Converters Association (GPPCA) has appealed to the government to abide by its pledge to reserve 40 per cent of the printing and supply of books to the state for local printers.

According to the association, some publishers, in pursuit of short-term profit, had been using the excuse that local printers did not have the capacity to execute local contracts, hence the need to execute printing jobs outside the country.

The President of the association, Mr James Appiah Berko, made the appeal when a delegation from the association paid a courtesy call on the Managing Director of the Graphic Communications Group Limited (GCGL), Mr Kenneth Ashigbey, in Accra Tuesday.

According to Mr Berko, there was speculation that the 40 per cent of printing jobs promised by the government might be cut to 20 per cent.

He said the cut down would be unfair to printers, since most of them had made serious investment in anticipation of the said contracts.

Also, the print quality had improved tremendously, making the country one of the three most efficient countries in printing and delivery of its own electoral materials, he added.

However, Mr Berko said the high cost of doing business in the country had made it difficult for local printers to win contracts, while foreigners were being allowed to import textbooks and other learning materials without paying taxes.

He indicated that whereas the association had, at various fora, articulated its views, built the capacity of members and invested heavily in machinery and equipment as a way of attracting government’s attention, publishers appeared to have succeeded in their claims that local printers lacked capacity to deliver on contracts.

Mr Berko said unless the situation changed and local printers were offered more jobs, the country would use its scarce resources to finance the economies of other countries.

Responding, Mr Ashigbey said the production sector could only develop if Ghanaians were allowed to manage their own businesses, saying, “There is no way the country will develop if the productive sector is not developing.”

He said printers needed to unite, put their ideas together and make their voices heard in order to make the government see that giving local printers a chance was also in the interest of the people.