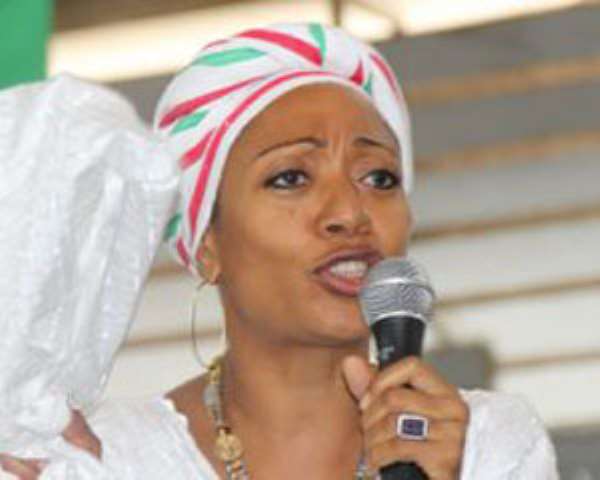 The Convention People's Party (CPP) Tuesday became the first political party to launch its manifesto for the 2012 presidential and parliamentary elections with a focus on social transformation, a sustainable economy and social justice.

Dubbed the 'CPP's S-cube Programme to Get Ghana Working Again', the manifesto aspires to ensure a coherent approach to the management of the socio-economic policies of Ghana.

The party also seeks to have Parliament adopt a long term national development plan that will be known as Ghana at Seventy Five; A Roadmap to High Income Status.

The 20-page abridged version of the manifesto was launched at the Agbogbloshie Market in Accra.

The launch which also coincided with the 63rd birthday anniversary of CPP drew hundreds of party supporters and sympathisers clad in party paraphernalia.

The party used the occasion to also launch its community health treatment programme where more than 500 market women at Agbogbloshie were offered free health screening and medication.

Outlining some key areas in the book, the campaign committee chairman, Dr Kweku Osafo, said the manifesto centred on policies that aimed at developing the economy, particularly raising the standard of living of the citizenry.

He explained that, the manifesto had been designed to address the monetary and fiscal policies, managing an oil and gas economy, industrial policy, agriculture and rural transformation and infrastructure development.

Also in attendance were Prof Agyemang Badu Akosa, a leading member of the party, and the acting Youth Organiser, Kadir Abdul-Rauf.

Addressing the gathering, an apparently elated Dr Sakara promised to restore what he described as the country's lost national pride 'which has made Ghana lose its international reputation as a beacon of hope on the African continent'.

According to him, since 1966, Ghana's economy had suffered from bad policy decisions emanating from what he said was ineffective leadership by the NPP and NDC.

'' We will pursue food security by investing in a modern food production method. We will encourage, through incentive systems, private investment in manufacturing aimed at replacing imports wherever and providing job opportunities''.

According to Dr Sakara, the CPP government would work with and re-orient the Bank of Ghana to ensure that employment creation remained a key monetary policy objective.

For her part, Ms Nkrumah called on Ghanaians, particularly the youth, to have confidence and faith in the leadership of the party, giving the assurance that the CPP would restore hope and vision to the people.

She said the CPP laid the foundation stone for Ghana's economic development which she noted had suffered badly under the leadership of the NPP and NDC.

''Enough is enough, we cannot continue to sit down and watch the country's economy suffer at the hands of our leaders whose only aim is to fill their own pockets,'' she said.

Ms Nkrumah said the leadership of the CPP would not fail the country if given the mandate to rule the nation, stressing '' CPP will take the responsibility to ensure that the standard of living of Ghanaians is improved''.

''Under its social transformation initiative, the CPP is convinced that the depth of the moral decay and indiscipline in the society needed to be corrected if the country wants to implement any policy to improve life and reduce poverty,'' she stated.

She said that 'In recent years, our country has seen an increase in corruption, partisanship and indiscipline. We believe the absence of a national set of core values have contributed to the degeneration.'

With its sustainable economic policy, the manifesto depicts that the current economic structure has failed to focus on the future needs of Ghana. According to it, the country is not earning enough foreign exchange from its major exports to meet the extravagant import habit.

'CPP believes the role to dignity and respect for Ghanaians and the eventual emancipation of people of African descent begins with self determination. We believe we must practise self reliance and pursue self sufficiency if we are to attain both economic and political freedom,' it stated.

Under its social justice policy, the party is convinced that the availability of food at affordable prices, access to good health, provision of affordable housing are basic rights that every Ghanaian deserves.

'We regard quality education as a means of creating equal opportunity for all and we shall use it as an instrument to make our country an equal competitor with the rest of the world,' it stated.