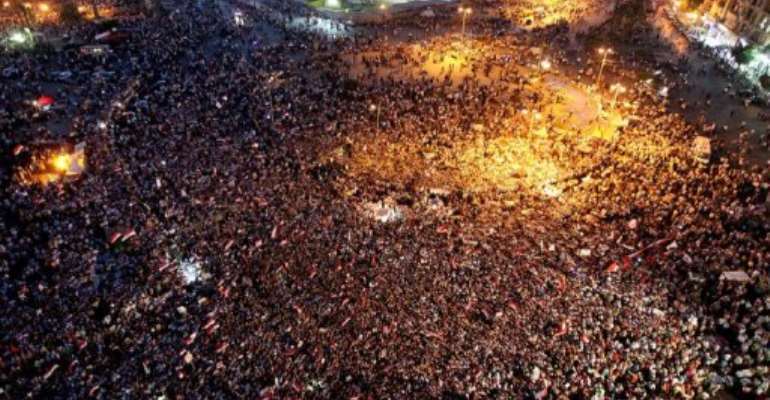 CAIRO (AFP) - Thousands of Egyptians packed into Tahrir Square on Tuesday to protest the ruling military's bid to grab new powers, as both presidential candidates claimed victory in the country's historic vote.

In the hub of the uprising that ousted president Hosni Mubarak, protesters chanted against his military successors, with a steady trickle of people joining the demonstration after sunset.

The demonstration comes against a backdrop of uncertainty over the winner of the presidential vote, with the Muslim Brotherhood candidate Mohammed Mursi and his rival former prime minister Ahmed Shafiq both claiming victory.

The Brotherhood said it would participate in Tuesday's protest, called by several groups that participated in Egypt's 2011 uprising, against measures by the ruling military council to claim sweeping powers.

The declaration also gives the council veto power over the wording of a new permanent constitution and appeared to interfere with the ability of the incoming president to exercise his powers.

"The dissolution of the parliament is null and void, the military council must leave and now legitimacy lies with the people who elected Mursi," said Abdel Basset Mohieddine, a Brotherhood support taking part in the protest.

Official results in the presidential poll, the first since the uprising that ousted Hosni Mubarak, are not expected before Thursday, but both camps claimed victory for their candidates.

At a news conference on Tuesday, Mursi's campaign released what they said were certified figures, which they said showed their candidate taking 52 percent of the vote.

But Shafiq campaign spokesman Ahmed Sarhan told reporters he was "certain that the next president of Egypt is General Shafiq," saying the former prime minister had secured 51.5 percent of the vote.

A confirmed win for Mursi would mark the first time the Islamists have taken the presidency of the Arab world's most populous nation, and there were jubiliant scenes at his headquarters after his campaign projected victory.

Mursi himself has pledged to work "hand-in-hand with all Egyptians for a better future, freedom, democracy, development and peace."

"We are not seeking vengeance or to settle accounts," he said, adding that he would build a "modern, democratic state" for all Egyptians, Muslims and Christians alike.

No matter who emerges as the winner, the country faces the prospect of a showdown between the Brotherhood and the ruling military.

The Brotherhood insists the parliament still has the power to legislate and said Monday it would take part in "all popular activities against the constitutional coup and the dissolution of parliament, beginning on Tuesday."

The ruling military body has introduced de facto martial law, given itself control of the legislature and state budget and also granted itself veto power on a new constitution.

The moves have sparked expression of concern from international capitals, with Washington and Paris calling on the military to stick to a schedule of handing control to a civilian government.

A delegation from the Carter Centre that observed the presidential vote also expressed concern, saying the constitutional declaration and other moves by the military called "into question the meaning and purpose of the elections."

And rights group Amnesty International warned in a statement that the moves put "the country on the path to further human rights violations."

But the military has sought to quiet fears over the declaration, insisting it will transfer power to the new president on schedule by the end of this month, and pledging the new leader would enjoy full powers.