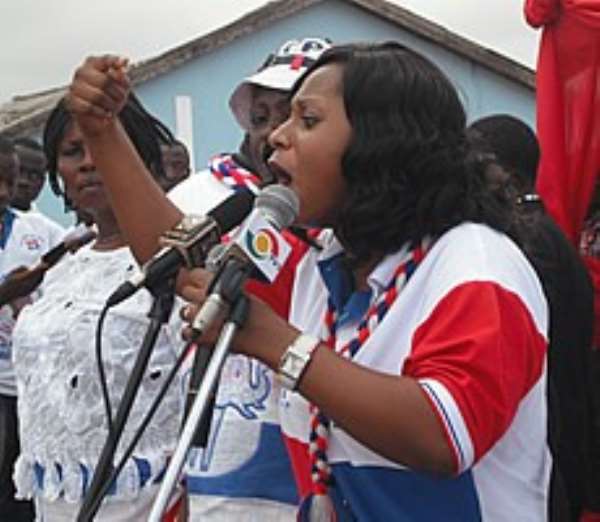 The parliamentary candidate for the Dome/Kwabenya constituency, Lawyer Sarah Adwoa Safo is set to launch her campaign on Monday 2nd July, 2012, at the Taifa Norway Park.

The campaign launch is expected to attract seasoned politicians within the elephant fraternity to speak to an expected large crowd.

The campaign launch will also boost the morale of the foot soldiers to commit themselves to a vigorous campaign ahead of election 2012.

Some of the stalwarts who have agreed to speak on the day of the launch include the Flag bearer of the New Patriotic Party, Nana Addo Dankwah Akufo Addo, Former President J A Kufuor, Second Deputy Speaker of Parliament and the sitting MP of Dome Kwabenya, Professor Mike Oquaye, Party General Secretary Kwadjo Owusu Afriyie, former Minister for works and Housing, Boniface Abubakar Saddique.

Also in attendance will be some prominent young members of parliament who have so far endeared themselves well in parliament, and include Mathew Opoku Prempah Member of Parliament for Manhyia, Samuel Attah Akyea MP for Akyem Abuakwa South and Isaac Asiamah member for Atwima Mponua.

Adwoa Safo, who was elected in a highly competitive parliamentary primaries, has since her election, done a lot of consultations, meeting with some social amalgamated groups within the constituency to learn at first-hand what their immediate priorities and needs are, and how to find solutions to those concerns.

Some renowned and seasoned gospel artistes have also been billed to thrill patrons with good music; notable among them are Isaiah Kojo Ampong and Gifty Osei.