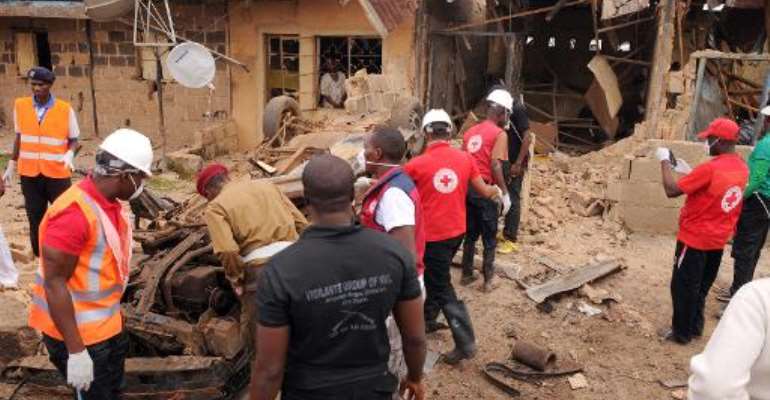 File picture shows emergency response workers at the site of a car bomb blast in the central Nigerian city of Jos, on May 25, 2014. By (AFP/File)

"We received 21 dead bodies and 27 injured victims from the blast," the source at the Sani Abacha Specialist Hospital after the explosion in the Nayi-Nama area of the city on Tuesday night.

Local residents said the bomb appeared to have been hidden in a motorised rickshaw outside the venue, where crowds had gathered to watch tournament hosts Brazil play Mexico on large screens.

The blast was the latest in a series at football viewing centres in Nigeria blamed on Boko Haram militants, who have been waging a deadly insurgency in the country's north since 2009.

Football is Nigeria's national sport and has a fanatical following but recent blasts targeting fans in northeastern Adamawa and the central state of Plateau have seen the authorities close big screen venues on security grounds.

The World Cup would normally have seen large crowds congregate to watch the matches, including those of Nigeria's national team, the "Super Eagles", but many fans have opted to stay at home for their own safety.

Adamawa and Yobe, of which Damaturu is the capital, have both been under a state of emergency since May last year to try to curb the violence, so far with little success. Borno, which sandwiches the two states, is also under special powers.

The hospital source, speaking on condition of anonymity because he was not authorised to speak to the media, said soldiers and police brought in the dead and injured from the scene of the blast, which was quickly cordoned off.

"The bodies are being kept in the morgue while the injured are receiving treatment at the accident and emergency unit before they are moved to the ward," the source said.

"The victims are young men and children. They have burns, ruptured tissue and bone fractures."

There was no immediate comment from the Yobe state police or emergency relief agencies when contacted by AFP.