Israel to send first plane of S.Sudanese back home 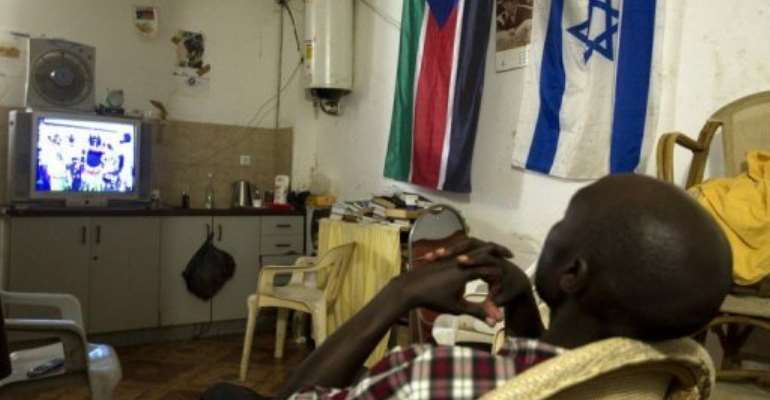 BEN GURION AIRPORT, Israel (AFP) - Israel was preparing to fly some 120 illegal immigrants back to the South Sudan capital of Juba on Sunday, in the first wave of expulsions of tens of thousands of Africans, officials said.

The first charter flight was to leave Ben Gurion airport near Tel Aviv at midnight (2100 GMT) and arrive in Juba some four hours later, officials said.

"They will be leaving here at midnight," Sabine Hadad, spokeswoman for the Population and Migration Authority told AFP, saying the first plane was carrying 120 South Sudanese who had agreed to be voluntarily repatriated.

Over the past week, Israel has been conducting mass raids to round up illegal immigrants, most of them Africans, with the aim of sending them home.

"So far, more than 500 people have volunteered to leave, and 300 people have been arrested," Hadad said of the operation which began at dawn on June 10.

The vast majority of them are from South Sudan.

By early evening, Terminal 1 was a hive of activity with hundreds of people signing forms and receiving money before the late-night flight, an AFP correspondent at the scene said.

Interior Minister Eli Yishai, who has vowed to rid Israel first of all the illegal immigrants from South Sudan and the Ivory Coast, then those from Eritrea and Sudan, was on hand at the airport to see them off, the correspondent said.

Israeli Prime Minister Benjamin Netanyahu said the first plane would leave on Sunday night with another plane leaving "next week."

"Today, the government will begin the operation to repatriate illegal work infiltrators to their countries of origin," he told ministers at the weekly cabinet meeting. "We will do this in an orderly and dignified manner."

Harel Locker, director general of Netanyahu's office said that over the weekend, only 38 immigrants had crossed the border into Israel, in what was "the lowest weekend figure in years."

"Our message that there is no work in Israel for infiltrators and that they will no longer be taken to Tel Aviv but put in detention for long periods, is getting through," he told public radio.

Israeli figures indicate there are some 60,000 Africans in the country illegally, most of whom live in run-down neighbourhoods of south Tel Aviv.

Only a tiny fraction of them are from South Sudan, with rights groups putting their number at some 700, although Israeli officials say the number is at least 1,500.

Until recently, the South Sudanese were shielded by an Israeli policy giving them protection as a group from deportation.

But on June 7, a Jerusalem court overturned that long-standing policy, ruling that they were no longer at risk in their homeland and clearing the way for their mass expulsion.

Rising tensions over the growing number of illegal immigrants exploded into violence last month when a protest in south Tel Aviv turned ugly, with demonstrators smashing African-run shops and property, chanting "Blacks out!"

Israel, which reportedly backed South Sudan through its 1983-2005 war with Khartoum, recognised the new nation and established full diplomatic relations with its government shortly after it declared independence in July last year.