20 years on, the dilemma of world's biggest refugee camp 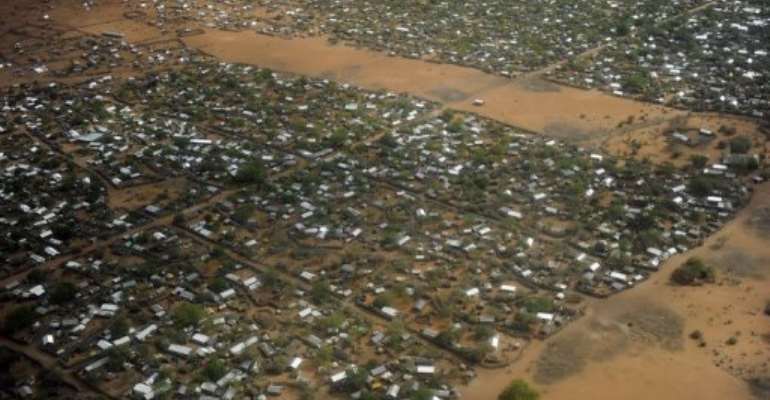 A general view of the Dadaab Refugee camp. By Tony Karumba (AFP/File)

NAIROBI (AFP) - Set up as an emergency measure 20 years ago, the refugee camps for Somalis in Dadaab in eastern Kenya have swollen to become the world's biggest -- a dilemma for experts and an open prison for residents.

With more than 465,000 inhabitants at the end of May, the camps at Dadaab now constitute Kenya's third-biggest town. But the health situation and the social situation are going downhill, insecurity has taken hold there and the Kenyan government is losing patience.

"It is clear that keeping the camps as they are for another 20 years is not an option. But what is the alternative?" Medecins sans Frontieres (Doctors without borders-MSF) asked at a conference on the subject this week in Nairobi.

The camps were set up in 1992 in Kenya's arid north east, almost 100 kilometres (60 miles) from the Somali border, as what was at the time a temporary measure to aid refugees fleeing the civil war that followed the fall of Mohamed Siad Barre.

But things went from bad to worse in Somalia with conflict aggravated by drought bringing on one of the world's worst humanitarian crises, notably last year when tens of thousands of Somalis died of hunger and hundreds of thousands of others joined the ranks of those who were displaced or who fled.

Since then a coalition of regional military forces has pushed back the Shebab Islamists and a good rainy season has brought satifactory harvests.

But nobody is moving out of Dadaab and the situation is becoming increasingly difficult.

"The best solution for the refugees is to go back home," Kenya's Commissioner for Refugees Badu Katelo said, arguing that the setbacks to the Shebab in southern Somalia should open the way for "voluntary" repatriation of refugees.

For most of the humanitarian workers at the conference voluntary repatriation remains a pipe dream, even if they readily admit that Kenya bears "a disproportionate burden."

"Voluntary repatriation is a possibility, but it is a bit elusive. The peace process is not very stable and I don't see us looking into an intensive promotion of a repatriation scheme," said Abel Mbilinyi, deputy representative of the UN refugee agency in Kenya.

The humanitarian agencies see integration in Kenya as the inevitable solution for the refugees who have been here the longest.

"They have nothing left in Somalia, it is the third generation, they do not know where they are coming from," said Elena Velilla, MSF's head of mission.

UNHCR's Mbilinyi said he personally advocates the opening up of "a frank dialogue on the prospect of local integration" for the refugees, noting that a good number of them are actually eligible for Kenyan nationality.

He cited the example of Tanzania, which in 2010 gave nationality to 162,000 Burundian refugees who had fled their country 40 years earlier.

"Yes, 350,000 refugees can claim Kenyan citizenship. Will they get it? No," replied one of the deputy speakers of the Kenyan parliament, Farah Maalim.

This MP, himself of Somali origin, says there is too much antagonism between the Somali and non-Somali communities in Kenya for such a massive naturalisation exercise to work.

A storm of publicity around last year's famine in Somalia enabled the UNHCR, which runs Dadaab, to collect $100 million (79 million euros) last year. This year the agency raised only $70 million.

Unrest in Somalia has spilled over into Dadaab, with a series of attacks in the camps and, last October, the kidnapping of two Spaniards working for MSF, who have since been held in Somalia.

"We are in an open prison," protested Bare Osman Abdi, deputy chairman of the young people in Dagahaley camp, referring to the ban on refugees working or leaving the camp without authorisation.

"There are people who have been here for the last 20 years and who have never ventured outside the camp," said Abdi, who arrived in the camps at the age of five.