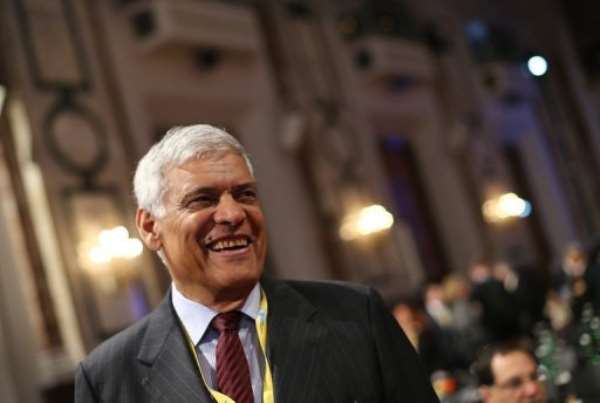 VIENNA (AFP) - OPEC oil ministers are meeting to consider changing their oil output ceiling amid divisions over how they should respond to plunging crude prices and uncertainties over global energy demand.

The 12-nation Organization of Petroleum Exporting Countries will decide whether to change their output target of 30 million barrels per day (mbpd), which is flouted by several members including kingpin Saudi Arabia.

This week's OPEC meeting has been overshadowed by a $30 slump in Brent oil prices since March, as the market was shaken by the eurozone debt crisis, slowing Chinese growth, and mounting questions over the health of the global economy.

The price of Brent crude oil -- the European benchmark -- has tumbled from $128 per barrel in early March to $96 earlier this month.

Most significantly, Saudi Arabia has ramped up its own oil production since the last OPEC meeting in December, when members had decided to hold their actual collective output ceiling at 30 mbpd.

In the first quarter, Saudi output jumped 250,000 barrels per day to 9.9 mbpd from a year earlier, according to OPEC estimates, as the kingdom sought to booost the global economy and offset the impact of looming sanctions on key producer Iran.

As a result of this, and recovering production in Iraq and Libya, the International Energy Agency estimates that total OPEC production stood at 31.87 mbpd in May -- easily overshooting the official target.

In the run-up to the high-profile OPEC gathering, oil ministers have expressed sharply divergent views over output policy, sparking speculation that they could decide to maintain the status quo.

OPEC members Ecuador and Libya expressed concern on Wednesday that the cartel was pumping too much oil and therefore depressing prices, but shied away from calling for lower output.

Hawkish nations Venezuela and Iran have called for the cartel to trim output to bolster the market -- but Saudi is concerned over the global economy and has reportedly urged greater production.

Against this backdrop, Kuwait's Oil Minister Hani Hussein predicted that OPEC would "most likely" opt for no change at its eagerly-awaited meeting in Vienna, where the cartel is based -- but admitted to divisions.

Secretary-General Abdullah El-Badri said he was "sure" members would reach a consensus.

Asked if the cartel will reach agreement, he replied: "Yes, sure, we can reach it... We have our problems here and there, but at the end of the day, we solve our problems."

OPEC ministers will also discuss a replacement for the Libyan El-Badri, who is set to retire at the end of the year.

So far, four candidates for the position have emerged, from Ecuador, Iran, Iraq and Saudi Arabia.

Any candidate for the job of OPEC secretary-general will need unanimous support. If this is not possible, there is still the option of extending El-Badri's current mandate.