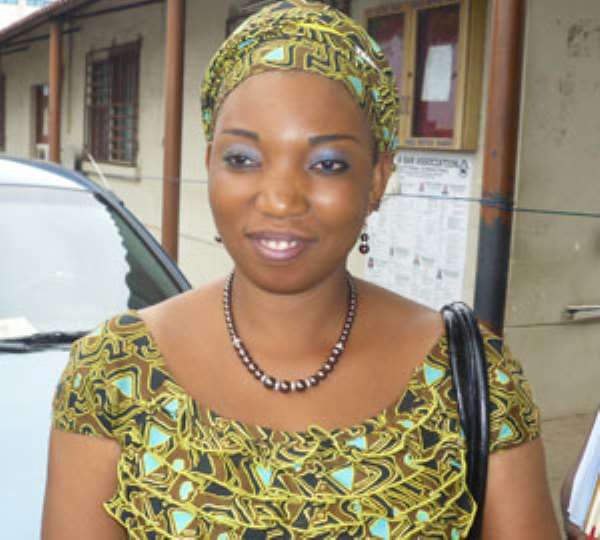 AMINA MOHAMMED, the lady at the centre of the mass rape story on a Tamale-bound Yutong bus at Kubiase near Ejisu, was yesterday acquitted and discharged by an Accra Circuit Court after the court observed that the prosecution had failed to make a case against her.

This followed a submission of no case by Anima's lawyers in which they argued that the prosecution could not establish the basic ingredients in the charges leveled against her.

Amina was standing trial on two counts of publication of false information, causing fear and panic as well as deceit of public officer.

The court, presided over by Mrs. Patience Mills-Tetteh, in her ruling on the submission of no case, upheld the argument of the defence team, stating that the prosecution did not have a case legitimate enough to warrant the conviction of the accused.

The judge also indicated that the prosecution failed to establish that the accused had the intention to commit the act she had been accused of.

According to Mrs. Mills-Tetteh, evidence before the court had disclosed that there was an attempted robbery but no mass rape occurred as allegedly stated by the accused.

She indicated that prosecution witnesses had corroborated the issue that there was some armed attack but denied the issue of mass rape on the said bus.

Exaggerated Account
The judge only saw Amina's case as a young lady who was decided to give an exaggerated account of what she encountered on her journey to her family members.

To the judge, there was no intention by the accused to cause fear or panic as the prosecution failed to establish same.

The judge observed that Amina was not in the business of publishing information and therefore not responsible for news dissemination.

Apart from the exaggerated portion, the court stated that she did not have the capacity to publish the information because she had no gadgets; neither did she hold a press conference to send the matter into the public domain.

The court was of the view that it was the media which took the matter up and hyped it.

On the issue of allegation by one of the prosecution witnesses, Michael Ofosu Frimpong, that some New Patriotic Party (NPP) officials attempted to bribe him over the Amina case, the judge stated that it was not supported by facts.

The defence team, led by Prof Ken Attafuah, making its submission of no case, argued that the prosecution could not establish a prima facie case against the accused in the sense that it failed to prove the three basic elements of the charges that there was a false publication, an intention behind it to cause fear and panic and also the causation that justified the intention.

According to Andy Appiah-Kubi, the lawyer who moved the application,  'If one looks at the totality of the evidence, particularly the evidence of the seventh and eighth prosecution witnesses including the investigator, it was evident that in the whole of the country, there was no report of any body having come under fear or panic.

'Also, it was not before any competent court of law that there was a trial involving this particular accused person in the case of a report of somebody having suffered fear or panic or both. Therefore the element of causation was absent'.

Relying on Sections 11 and 13 of the Criminal Offences Act, counsel argued that in criminal law, what sustained a charge were causation and intent and that when either was absent, then there would not be prima facie case and the accused had to be discharged.

He said throughout the evidence, it was established that the statement, as allegedly published by the accused person, was not totally false because all the witnesses who gave evidence supported the position that they came under some form of armed attack.

In an interview with journalists explaining what he said in court on the day he moved the application, Mr. Appiah-Kubi said, 'Something happened that was correctly reported. So granted that part of the story was not even correct without admitting, there is a presumption that some part was proven to be correct in court and therefore challenges the totality of the issue of false publication'.

He argued that since they had challenged the falsity of the publication and therefore had created doubts in the elements needed to prove the guilt of the accused, those doubts inured to the benefit of the accused.

Mr. Appiah-Kubi, after the ruling, said he would confer with his client whether to seek remedy for her unlawful detention.

Acting Film
Amina, who said she was happy with the outcome of the case, said wanted to put the pieces of her life back together.

She said in the course of the trial, she was thrown out of her matrimonial home by her husband's family, who claimed that she had brought shame onto their party, the National Democratic Congress (NDC).

She indicated she was going to make a movie out of her ordeal for posterity.

Amina Mohammed captured national attention following her statement on Adom FM , a Tema-based radio station, that there was a mass rape of women on the Bawku bound bus during a robbery attack at Kubiase.

The mother of three children claimed the armed robbers forced male passengers to have sex with their female counterparts, including a father who was supposedly forced to sleep with his 14-year-old daughter.

She pleaded not guilty to the charges and until she was discharged, she was on a GH¢5,000 bail.