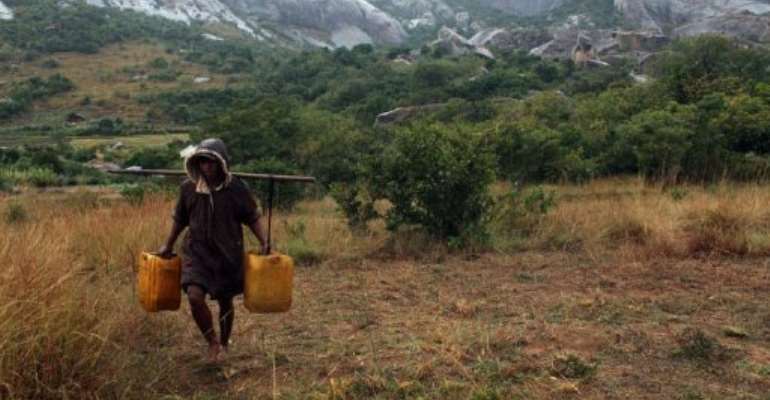 Local people in 2001 set up Anja Miray, which involved six villages in reforestation and the development of ecotourism. By Andreea Campeanu (AFP/File)

AMBALAVAO-FIANARANTSOA, Madagascar (AFP) - With his hat pulled down low over his face, Mamy braved the autumnal winds and rain of the southern hemisphere to proudly point to a range of grey granite mountains in Madagascar.

"This is a special place," he says, acting as a guide to the natural park. "We're going to see lemurs, caves, ancestral tombs, chameleons, birds, butterflies and also medicinal plants."

He belongs to Madagascar's Anja community which has been working to save local forests and wildlife and setting an environmental example that has earned Anja a UN-backed prize.

Up in the mountains, a labyrinth of corridors wind through the rock. Mamy points out zebu horns which mark the entrance to a tomb. A little farther on, he looks up and notes the black and white lemurs leaping from tree to tree.

"These are Maki-Katta lemurs. 'Katta' comes from the English 'cat' because they look like cats."

Today, 300 lemurs live in the park. Twenty years ago, they were nearly all gone. At the beginning of the 1990s, half of the 13 hectares (32 acres) of the forest of Anja was illegally chopped down.

The consequences were dramatic, including a fall in water supplies, the drying out of rice paddies and the drifting of sand on to fields. The lemurs fled and the few that remained were sometimes eaten by villagers close to starvation.

To cope with the disaster,local people in 2001 set up an association named Anja Miray (the community of Anja), which involved six villages in reforestation and the development of ecotourism.

The project received a United Nations donation of about 30,000 euros (38,000 dollars) -- a substantial payout in a country where three quarters of the population live on less than a dollar a day. The goal was to make local people aware of the economic interest in protecting their environment.

Eleven years later, the UN has awarded Anja Miray the biennial Equator Prize, which recognises 25 communities from all over the world for their work in safeguarding biodiversity and promoting ecotourism.

In a village another Anja native and local guide, Bruno, leads the way down a dirt track to a brick house where children are playing outside.

"Before it was a very small house. But today we have money, thanks to the association. There are several thousand tourists who come every year. So I was able to make my house bigger and build a balcony," he says.

Balconies, a typical regional feature, are a sign of a certain social standing. "Now almost everybody has one," Bruno remarks.

Ecotourism brings about 30,000 euros a year into this community of 2,500 people. With the help of this money, Anja Miray pays for patrols to watch over the park, take a census of the species living there and provide a welfare system to benefit the handicapped and the elderly. The community is also now self-sufficient in food.

Later this month representatives from Anja will go to Rio de Janeiro to accept their prize at the UN environment summit there. A celebration of this trip recently brought together the residents of Anja and about 40 guests from communities all over the Indian Ocean island nation.

Fatma Samoura, UN coordinator in Madagascar, was one of the invited and said: "I feel proud for this community."

And she said they have a message for the delegates at the Rio summit.

"Today these communities, by way of the statements they are going to make in Rio, will nevertheless raise the alarm, by saying, 'Listen, we made the choice of not being dispossessed of our land, but we should also like the Madagascan authorities really to help us to stay in our homes and to produce at the same time as conserving nature'," Samoura said.

The representatives who took part in the celebratory event founded a network whose aim is to ensure that each community enjoys the same type of development as has taken place in Anja.