'They want to kill me' in prison: Mubarak 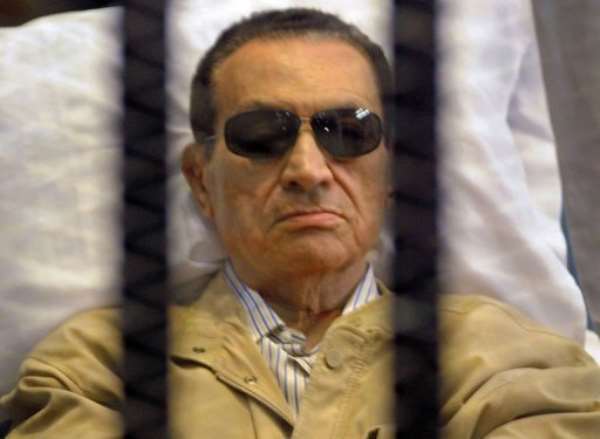 CAIRO (AFP) - Egypt's ailing ousted president Hosni Mubarak, now serving a life sentence in a Cairo prison over the killing or protesters, said the authorities "want to kill" him in jail, his lawyer told AFP on Monday.

"He says: 'They want to kill me. Save me, Mr Farid, find me a solution," said Farid al-Deeb, his chief lawyer in the murder and corruption trial which ended this month with his sentencing.

Mubarak's health has deteriorated since his incarceration on June 2, and he was defibrillated twice to revive his heart on Monday, a prison hospital source said.

"His condition is very critical," Deeb said. "I appeal through Agence France-Presse to all world leaders and NGOs: save Mubarak."

Earlier, an interior ministry source told AFP Mubarak's condition was "critical but stable", as officials weighed transferring him to a military hospital in the capital.

The 84-year-old former strongman was sentenced to life behind bars for suppressing a revolt against his rule in early 2011 in which nearly 850 protesters were killed.

He is currently being held in an intensive care wing of the prison.

Prison authorities agreed on Monday to allow his son Alaa, also jailed in the same prison on corruption charges, to join him and his other son Gamal.

Mubarak's wife Suzanne and his two daughters-in-law were given special permission to visit him on Sunday following rumours that he had died in prison, state media reported.

His family has formally requested a transfer to a Cairo hospital, but such a move could unleash the anger of activists and protesters at a particularly sensitive time in the country.

Deeb said he had visited Mubarak on Saturday and found his medical wing under-equipped. "It is a scandal," he said.

Authorities have neither accepted nor declined the request to transfer Mubarak, saying only that he will be "treated like all prisoners."

"Moving him now is very sensitive, with the threat of protests in Tahrir and the elections coming up," a security official said, referring to Cairo's iconic Tahrir Square, symbol of the 2011 uprising.

Since his ouster in February last year, there have been contradictory reports about Mubarak's health, with some saying he was suffering from cancer, heart ailments or depression.