SADA is yet another failed promise- Bawumia 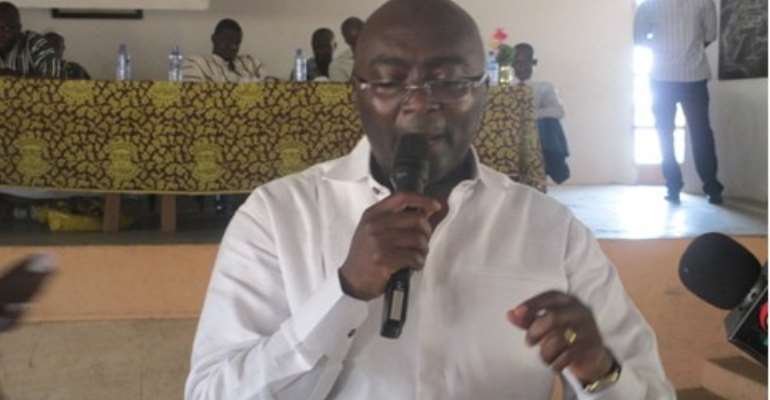 Dr. Mahamudu Bawumia, Running Mate to Nana Akufo-Addo for the December elections, has pledged that when given the mandate, the Akufo-Addo administration would prioritize the development of the North and ensure that it confronts and bridges the development gap between the South and the North.

Speaking at the 48th Annual Delegates Congress of the Northern Students Union in Bolgatanga on Saturday, Dr. Bawumia stated that the North had been neglected for a long time and chronicled the origins of the underdevelopment of the North.

He explained that the colonial administration as a matter of policy had deliberately starved the North of its development as it saw the North as a reservoir for labour, thus education for example was denied the North in the colonial era.

Dr. Bawumia stated that overtime, this deliberate denial of development and education for example had created stark disparities in development between the North and the South.

The NPP Vice-Presidential candidate expressed the sentiment that the NPP administration when elected would work to ensure that all parts of Ghana, whether in the west, the east, south or north receives its fair share of development and that the priority of the Akufo-Addo administration is to develop Ghana holistically with workable policies and programmes that would ensure that Ghanaians in general enjoy better livelihoods. He noted, however, that there is the need to bridge the development gap between the North and the South and this need would also be tackled head on by the next NPP administration.

Dr. Bawumia noted that judging from the promise by the NDC in 2008, the SADA fund should have had around 600million Ghana cedis in its accounts by now and rhetorically asked “where is the money”?

The former Deputy Governor of the Bank of Ghana, stated that Nana Akufo-Addo was still very much committed to the development of the North and that unlike the situation under the NDC, the NPP would ensure that the Northern Development Authority gets its appropriate share of all budgets to prosecute the agenda of bridging the development gap between the North and the South and holistically developing the nation.

'We need actual commitment, actual prioritization of northern development; we don't need programmes that are put on paper and when it comes to the execution you start complaining about lack of resources.

Touching on the unprecedented payment of judgment debts, Dr. Bawumia observed that the monies doled out to self confessed NDC financier, Alfred Woyome and CP could have put up about 1,500 6-unit classroom blocks across the country. He again noted these monies, paid for no work done could have created thousands of jobs and could have also been used to create two banks which could have supported small and medium scale industries. He said the Akufo-Addo government would not engage in 'Woyomization' but focus on jobs and the creation of more and more jobs.