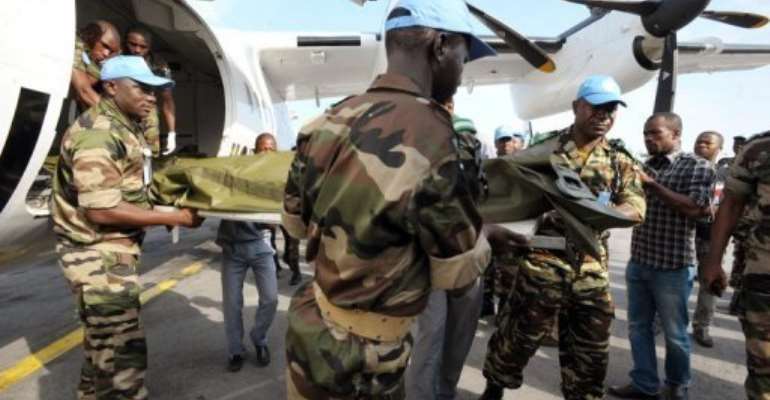 The wave of unrest prompted Liberia to announce it was shutting its border with its neighbour. By (AFP)

ABIDJAN (AFP) - Thousands of civilians in Ivory Coast have fled their homes after seven UN peacekeepers and eight civilians were killed in raids near the Liberian border, a UN official and residents said.

The wave of unrest prompted Liberia to announce it was shutting its border with its neighbour, although it said the move would not affect humanitarian work in the area.

The peacekeepers were killed Friday while they were patrolling an area between two villages after hearing rumours of an imminent attack on communities there. At least one Ivorian soldier was also killed in the ambush.

The authorities in Abidjan have said those behind Friday's attacks came from Liberia.

Desgroseilliers, of the UN Office for the Coordination of Humanitarian Affairs (OCHA), said at least eight civilians, including a woman, had been killed in Friday's attack, along with the seven peacekeepers from Niger.

"Hundreds of people have arrived in Tai, and one can imagine that thousands of others are on the road," he said, adding that 35 families had crossed the border into Liberia to seek safety there.

Ange Joelle, a young woman newly arrived at Glaro Ubor village in eastern Liberia said she had "walked through the bush with my child on my back.

"I don't know where the rest of my family is." she added.

In Monrovia, Liberian Information Minister Lewis Brown said the government had decided on the "immediate closure of its border", adding that President Ellen Johnson Sirleaf had ordered soldiers to be deployed on the frontier.

"Individuals found to have participated in cross border attacks will be arrested and extradited to Ivory Coast," Brown said at a press conference.

Desgroseilliers said aid workers from the International Committee of the Red Cross, the Danish Refugee Council and local groups were on site to assist those displaced, including supplying food and water.

OCHA was trying to coordinate the response to the situation with local authorities, she added.

Ivorian defence minister Paul Koffi Koffi said one Ivorian soldier on patrol with the UN force also died in the attack, while another army source said two of their men had been killed.

Abidjan said it had already sent reinforcements to the troubled region.

On Friday, UN Secretary General Ban Ki-moon said he was "outraged" by the killing of the Niger peacekeepers, the biggest losses suffered by the 10,000-strong UN mission in Ivory Coast (ONUCI) since it was deployed in 2004.

"All measures should be taken to see that this serious act does not go unpunished," he told AFP, adding that the 900-strong Niger contingent would nevertheless continue its work with ONUCI.

Liberia on Thursday angrily denied HRW's accusations that it was doing nothing to stop what the rights group described as the "war criminals" behind the cross-border raids.

Human Rights Watch also accused the fighters of forcing Liberian children into fighting with them.

Gbagbo refused to stand down after elections in 2010 that handed victory to his rival, current President Alassane Ouattara.

The former president has been in custody in The Hague since November awaiting trial by the International Criminal Court on charges of crimes against humanity.