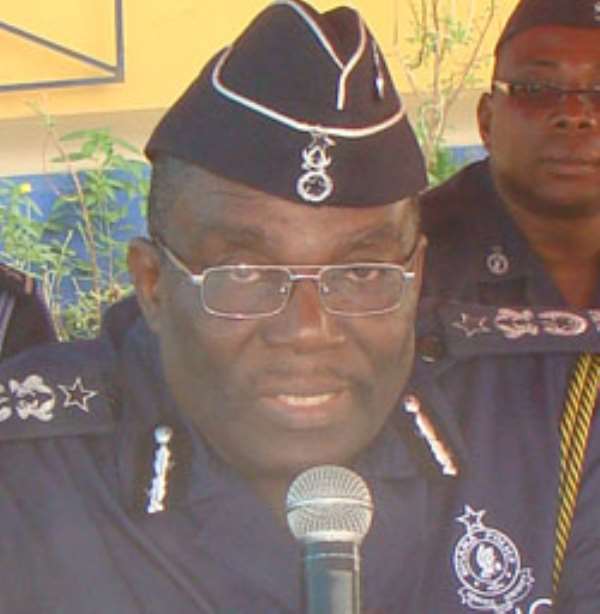 THE INSPECTOR General of Police, Paul Tawiah Quaye says that the fight against the proliferation of small arms in the country should be a joint effort of the police and the general public.

According to Mr. Quaye, even though the police had the mandate to ensure order and compliance of the laws of the country, members of the various communities where these small and illegal arms are kept or smuggled through must inform the police to take the necessary action to retrieve them and bring the owners to book.

'People see these weapons on a daily basis in their communities and yet because they are being possessed by their friends and relations, they keep quiet and do not report to the police for these weapons to be taken away. The police is committed to ensuring that all illegally acquired arms are taken away from the public, and would also ensure that the right procedures are followed in the acquisition or importation of weapons into the country. Over the years, we've mounted check points and depended on our intelligence to track people who are involved in the smuggling of weapons into the country and our communities. That is all we can do; this current attitude of 'I see but I don't see', 'I hear but I don't hear', will not help the police in intercepting or collecting these from the system.'

The IGP made this known at a durbar with the personnel of the Police Service at the forecourt of the Upper East Regional Police Quarters.

Touching on the development of the Ghana Police Service, the IGP said the Service was moving away from what he described as the old colonial system of policing to a system that encouraged community policing and included members of the public in policing.

He said a five-year Strategic and National Policing Plan initiated by his administration was a manifestation of the vision and mission of the Ghana Police Service and its guidance in fulfillment of its objectives.

The Strategic Plan, among other things, seeks to outline the priorities, programmes and methodologies to overcome the constraints that confront the Ghana Police Service. The plan, according to the IGP, would ensure that the capacity of the Ghana Police Service was improved to deliver world class police services in the country, in the areas of Human Resource recruitment, training and development, internal management practices, physical infrastructure and financial capacity improvement.

In pursuance of the Strategic Plan, the leadership of the Police Service has initiated an image cleansing policy to boldly fight corruption and eliminate all those who tarnish the image of the Service, noting that, '…we shall continue to name and shame all personnel who out of greed, engage in reprehensible acts that adversely affect the image of the Service.'

The IGP also added that most of the personnel of the Service lived in poor structures and this affected their alertness and readiness to duty, adding that that this does not help the Police Service in its quest to deliver a world class service in the country.