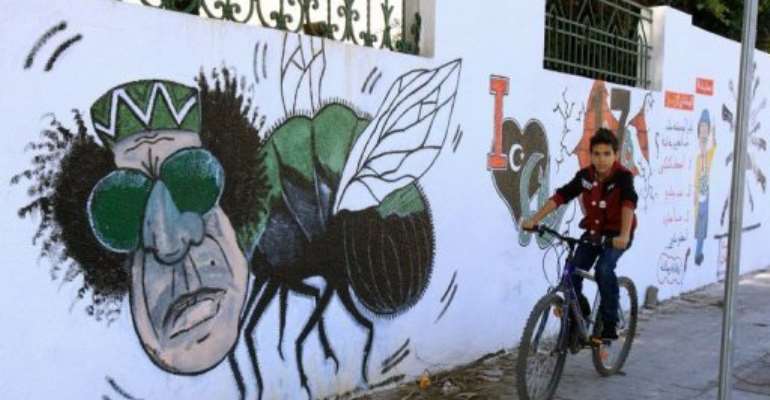 TRIPOLI (AFP) - The first trial of a senior official accused of killing demonstrators in the 2011 uprising against Libyan leader Moamer Kadhafi opened on Tuesday.

Former foreign intelligence chief Bouzid Dorda is accused of ordering security forces to "kill demonstrators and fire live ammunition at them" during the 2011 uprising that ended Kadhafi's rule.

Dorda is the first of the slain dictator's henchmen to appear in court since Kadhafi was captured and killed in October last year.

He is charged with detaining people without evidence of any crimes and using or threatening force to prevent others from enjoying their political rights.

Dorda is also accused of organising members of his tribe into an armed militia with the aim of sparking a civil war.

"I deny these accusations which contradict what I did during the events," Dorda said in reference to last year's revolt.

Dressed in a blue prisoner outfit, he entered the courtroom using crutches and sat in a caged section, an AFP journalist at the scene said.

Sources familiar with the case said Dorda, also a former prime minister, fractured his hip jumping out of a window in an escape bid.

Dorda, who served as Libya's UN envoy in the late 1990s and replaced Mussa Kussa as head of external intelligence services in 2009, was detained in September by forces loyal to the ruling National Transitional Council.

The trial was adjourned until June 26 at the request of his defence lawyer, Daw al-Mansuri, who wanted more time to review the case.

The new authorities are keen to show the world that they have a functioning judiciary and are capable of conducting fair trials for high profile figures.

They have requested the extradition of former spymaster Abdullah Senussi, who was detained in Mauritania in March, and ex-prime minister Baghdadi al-Mahmudi who has been held in Tunisia since September 2011.

The NTC also hopes to try Kadhafi's son Seif al-Islam, who is also wanted by the International Criminal Court for crimes against humanity, at home.

The trial intervenes as the North African nation prepares to hold elections for a constituent assembly on June 19, as pledged by the NTC.