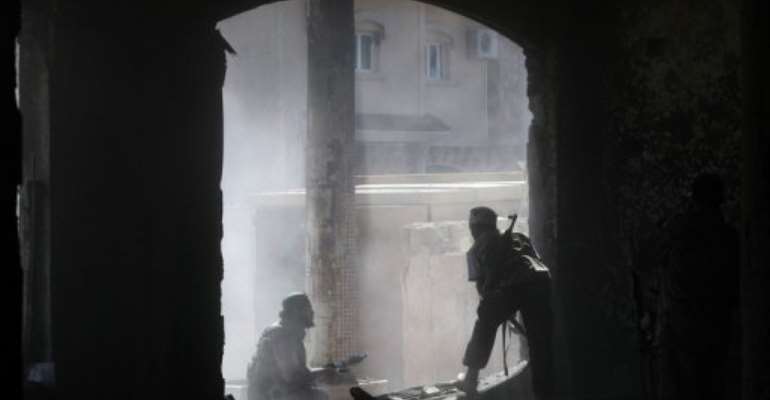 The 24 men denied the charges and insisted they were in Libya to work in its oil sector. By Ahmad al-Rubaye (AFP/File)

One of the Russians, judged to have been the coordinator, was condemned to life imprisonment while the others were sentenced to 10 years' hard labour.

The 24 men, who all denied the charges and insisted they were in Libya to work in its oil sector, were accused of having primed ground-to-air missile batteries to target NATO warplanes supporting the revolt against Kadhafi.

At the start of the trial in April, a military spokesman said the eastern Europeans had also backed the regime in attacks on civilians while "in the pay of Kadhafi and his brigades."

The ambassadors of Ukraine and Belarus were in court for the verdict and said the men would appeal.

The spokesman said the "mercenaries," held since their arrest on the fall of Tripoli in late August 2011 by a brigade of former rebels in the capital, had travelled to Libya of their own accord without the backing of their governments.

On April 11, Ukraine's foreign ministry said it believed its citizens were innocent and would fight for their release. If convicted, Kiev would seek to have them repatriated to serve out their sentences.

Ukraine had close links with Kadhafi's regime, and estimates that around 1,500 of its citizens were in Libya before the conflict started in mid-February 2011. Among them was Kadhafi's Ukrainian nurse, Galina Kolotnitska.