PETITION FOR REDRESS ABOUT LACK OF INFORMATION ON SALARY AND OTHER EMOLUMENTS OF POLITICAL OFFICE HOLDERS IN GHANA.

The people of Ghana, then finance these political offices through the payments of taxes and levies which are used to run or manage these offices and to conduct the other businesses of the State and its Ministries, Departments and Agencies.

There is no employer in our modern world who does not know how much his/her employees earn either on monthly basis or otherwise. By good labour practice, an employer who knows the level of pay and other conditions of service of an employee, shall be able to do a fair assessment of the performance of the employee(s).It shall enable the employer to determine whether or not an employee is well motivated to perform at maximum level.

The Directive Principles of State Policy in the 1992 constitution provide that Ghana shall be a democratic state. A democratic state provides transparency on the conduct of its affairs.

It is therefore an act of administrative injustice and unfairness for the people of Ghana to be denied the right to know how much our political office holders earn. The current practice whereby Parliament approves the salary and allowances of the Executive, and the Executive also approving salary and allowances for members of Parliament, is not transparent enough. This is because, after the end of every financial year when the Auditor General presents its audit reports to Parliament, we cannot guarantee that what is approved by the

two Arms of Government to each other, is what is actually paid since Parliament has monopoly over audit reports on public accounts of Ghana.

As a concerned citizen and a tax payer, I hereby and in all humility petition the Commission on Human Rights and Administrative Justice (CHRAJ) to investigate (under oath) and make the findings public to the people of Ghana, and in every two(2) years, the Monthly Salary, allowances, privileges ,travel allowances, car allowances, dependants' allowances and other benefits(if any) of each of the following political office holders;

(B)The Ministers of the state and their deputies.
(C)The chief of Presidential staff and the Secretary to the cabinet of Ghana.

(D)The Chief Executives and the Managing Directors of all state owned public corporations, organizations and institutions of which the President of the Republic of Ghana is directly their employer or are employed by a Minister of state and whose tenure of office is fixed to that of the President.

(F)The Speaker and Members of Parliament of Ghana including Deputy Speakers, Majority and Minority leaders.

(G)The Ambassadors and High Commissioners of Ghana appointed by the President of the Republic of Ghana.

(H)The Chairman and the Members of Council of State of the Republic of Ghana.

(I)The Chairpersons and other Members of the Boards of all state institutions of which the President or a Minister of State is the Appointing Authority.

It has become necessary to file this petition due to the following reasons,

(1)To promote greater administrative Justice, fairness and greater transparency, efficiency, effectiveness and accountability in the conduct of public affairs of the State of Ghana and to give real sovereignty to the people, since sovereignty without transparency, efficiency , effectiveness of Government machinery and accountability to the sovereign, is meaningless.

(2) It would eliminate the use of violence to get to power as characteristic of the politics of Africa states, because the people would demand more responsibility and accountability.

(3)That, most of our elites in Ghana were at one time or the other, classmates at Secondary Schools, Colleges, Universities and Law Schools. There is therefore the likelihood that, they would pursue their collective interests at the expense of the poor unless there is an effective checks and balances by the people.

(4)That, it appears that our intellectuals or elites across the political divide lack the interest to make bi-partisan efforts to put policies in place for an Industrial Revolution in Ghana, instead the policies of our leaders either deliberately or otherwise is geared to the reality that our economy remains consumer market for external economies. The present structure of the economy is the same as it was during the colonial period.

(5)That instead, our leaders across the political divide, appear interested in throwing insults at each other, polarizing the people of Ghana on tribal, ethnic and political lines forgetting that no one was born with tribal identity boldly written on his/her skin. It must be noted that, there is no market in Ghana where goods and services are cheaper for one political party members or ethnic groups than others, all the people of Ghana suffer together.

(6)That, historically the leaders of our traditional tribes or ethnic groups were largely illiterates or formally uneducated, but they were able to unite their tribal groups. Ironically, over 50 years of political independence of Ghana, our intellectuals with all their chains of degrees ,rather create unnecessary divisions among the people of Ghana and through this divide and rule, there is likelihood of exploitation of the people of Ghana and therefore a new form of colonialism that could be more exploitative than British colonialism is emerging.

(7)That, our public office holders fail to initiate a bi-partisan and a well formulated medium and long term development plan for Ghana. The socio-economic policies of Ghana has been ad-hoc and highly parochial and partisan.

(8)That, as a citizen and like other citizens, I am unable to make a fair assessment of the performance of our successive political office holders due to the absence of relevant information on the level of motivation provided to them by the state in comparism to their individual performance.

(9)That, because the job description of our public officials is not known by the citizens, fair performance assessment on them is difficult. When political appointments are made, we are often not told which new innovations, policies or new ideas that the appointees are to bring on board to solve specific societal problems. Therefore, some citizens often perceive these appointees as mere figure heads performing routine roles, red-taping and leadership is therefore seen as business as usual and so elementary in the face of increasing societal problems begging for solutions.

(10)That, the present structure of the Ghanaian economy is the same as it was during the pre-colonial and colonial period. This is because the economy is still a raw material exporting economy with excessive importation of goods unfortunately, including used under wears and it is highly donor dependent. This state of affairs undermines the dignity of Ghana and it is a leadership catastrophe, a catastrophe which led us into colonialism and the barbaric slave trade.

(11)That, due to the emergence of global warming, in the near future, the Ghanaian climate might not favour the production of raw materials such as cocoa. Therefore, the country needs to make the best use of its resources by adding value to them now through processing and manufacturing. It is a common sense that our underdevelopment and dependence on foreign aids and loans is a technology problem yet policies and institutional frame work to overcome this predicament is not forth coming.

(12)That, the poor rural farmers had contributed so much to finance the education and educational infrastructure in Ghana just after independence. The present day leaders in Ghana across the political divide benefitted immensely from the benevolence of our poor rural farmers but are now having different lifestyles and attitudes towards them forgetting that, `` to whom much is given, much is expected.''

(13)That, there is increasing misery, abject poverty and an erosion of income levels of the people in the rural areas in Ghana. The expectations of the rural farmers that the investment in formal education of their children at independence could assist them so that, one day they could replace hoes and cutlasses with modern agric-machinery has been largely dashed away.

(14)That, the current high rate of youth unemployment in Ghana, the alarming rate of rural-urban migration and the housing and sanitation challenges in our urban centers especially in Accra, is a serious threat to national security and stability. It is regrettable that, policy choices are not forth coming to address this unfortunate situation. It must be noted that, it will not be in the medium and long term security interest of the rich if the poor children live in urban slums, uneducated or as school drop-outs and exposed to drugs.

(15)That, there must be a Technology and Industrialization Levy/Fund as a matter of urgency. This fund should be modeled on the Ghana Education Trust Fund (GETFUND), District Assemblies Common Fund and National Health Insurance Fund (NHIF). That industries established under the Technology and Industrial Fund must be managed through Public-Private and Institutional share offers and a well structured, legal, regulatory and administrative mechanisms must be put in place in addition to an effective marketing of products from these industries. The rich should contribute more to this fund.

(16) That, education in Ghana from Senior High School, College, Polytechnic to University is very expensive. Yet, parents have to endure the financing of their wards' education. Regrettably, after completion of these levels of education, the youth remain burden on their parents because, there is little or no jobs in the economy and they therefore do not pay income tax for national development. The education system fails to be skills development oriented.

(17) That, the Ghanaian economy has the potential to grow and expand to cater for all but, the prudent policy framework is not emerging. The economy is usually tightened by government to achieve good indices such as lower inflation rates instead of being expanded and in doing so, it is the masses that suffer. The economy shall be a better place for all citizens if there is mass production of basic goods and services through the use of technology.

(18)That, this petition is out of conviction and patriotism, it bears malice against no one or group(s) but against poverty, indignity and suffering of our people. In filing this petition, I am aware of the power and authority of CHRAJ to address the request in this petition, the power as provided in section 216 of the 1992 constitution, the other relevant provisions in the said constitution including the Directive Principles of State Policy of Ghana and other relevant Act(s). I am mindful also of the words in the National Anthem, the National Pledge and Dr Ephraim Amu's patriotic song “Yen ara asase ni”. 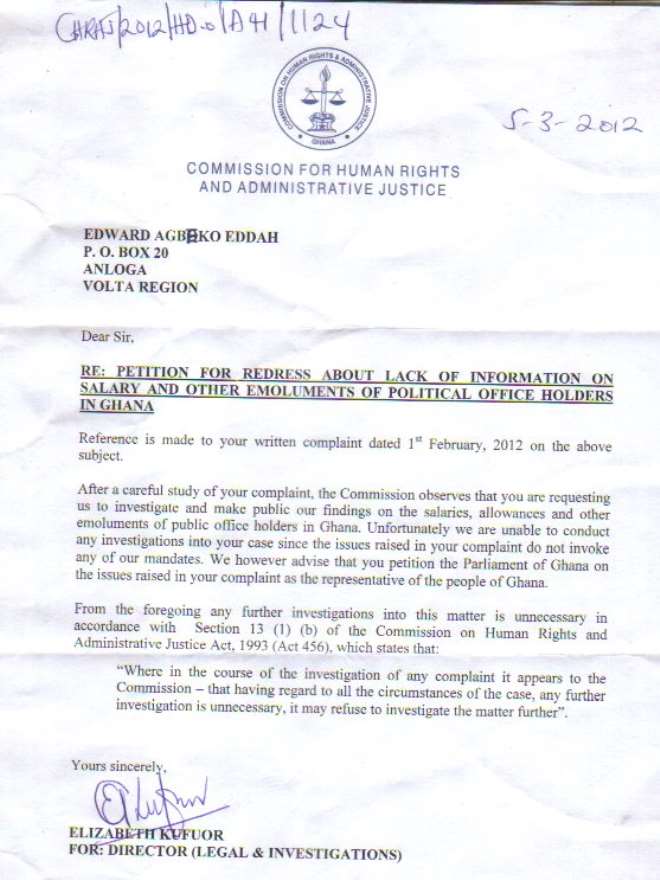