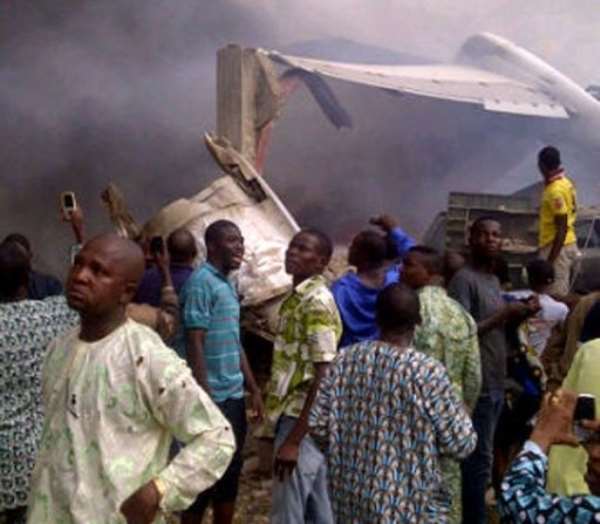 LAGOS (AFP) - At least 153 people are feared dead after their plane plunged into a residential area in Nigeria's economic capital Lagos on Sunday, officials and residents said.

Thick smoke rose from the area near the Lagos airport and flames could be seen coming from the building. Residents said the plane had been coming in low, making a loud noise, when it slammed into the residential area.

Some residents said it appeared that the plane nose-dived into the neighbourhood.

Wreckage including a detached wing could be seen in the neighbourhood as the inferno burned. The cause of the crash was not immediately clear.

"It was a Dana (airline) flight out of (the capital) Abuja to Lagos with about 153 people on board," Nigeria's head of civil aviation Harold Demuren told AFP.

Asked if anyone likely survived the crash he said, "I don't believe there are any survivors."

Lagos State police spokesman Joseph Jaiyeoba told AFP the plane went down in the Iju neighbourhood on the mainland of the city where the bulk of the city's population lives.

"It was flying low with a lot of noise for about five minutes before it crashed into the residential area," one resident said. "It then burst into flames."

Another resident, Tunji Dawodu, said "I was just coming out of church around 3:30 pm when I heard a loud noise."

"I thought it was an explosion," he said. "Then there was a huge flame from the building where the plane has crashed into."

A spokesman for Nigerian airline Dana confirmed one of its planes was involved in the crash but could not immediately provide further details.

"I can confirm that one of our planes crashed today on the outskirts of Lagos," Tony Usidamen told AFP. "We lost communication with the aircraft. We are going to issue an official statement."

Nigeria has a spotty aviation record, though Dana has been considered to be a relatively safe domestic airline.

It began flights in November 2008 and had been operating up to 27 daily flights using a fleet of MD-83 aircraft, according to information on its website.

This latest incident came after another plane crash on Saturday night in the capital of the nearby West African nation of Ghana, which saw a cargo plane overshoot a runway and hit a passenger bus, killing at least 10 people.

The Allied Air cargo plane had departed from Lagos and was to land in Accra.