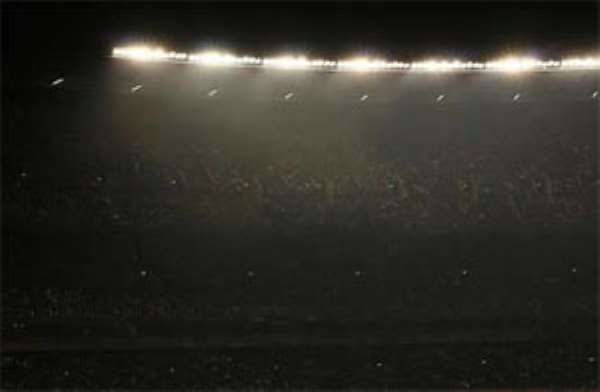 Just when Ghanaians were beginning to enjoy the 'Agoro' soccer as displayed by the Black Stars in their World Cup Qualifier against Lesotho yesterday at the Baba Yara Stadium in Kumasi, a shameful and unexpected incident happened: The floodlights refused to come on when darkness had set in.

The development compelled my many observers to describe yesterday as 'Ghana's day of shame', as the majority of well-meaning Ghanaians sat on tenterhooks for the 83 minutes that the match was on hold.

Ghana was leading 4-0 when darkness began to set in around the 53rd minute.  Naturally, everybody expected the authorities to switch on the floodlights, but it never happened. The whole country, and the rest of the world waited for one hour 23 minutes before the lights came on.

The shameful incident definitely cast a deep slur on Ghana's image across the globe, as the match was being watched by millions of viewers on various TV networks across the world, including ESPN Brazil.

As usual, government functionaries sought to blame the Electricity Company of Ghana for the goof, with President's Spokesperson Koku Anyidoho coming out to announce that the Ashanti Regional Boss of the ECG was fired with immediate effect.

In an interview on Joy FM, Mr Anyidoho said the dismissals would affect all those in line of duty at ECG and all those who had something do with the matter.

He said, “President Mills is upset and everybody who has a role to play in the matter will have their heads roll.”

“This is unacceptable and the president is upset,” he said.

Asked whether the decision to suspend the ECG Director had been communicated to him, Mr Anyidoho said, “The people of Ghana matter more so it does not matter whether they are informed or not.”

This was seen by the majority of Ghanaians as a joke and propaganda ploy, especially since it turned out that ECG had nothing to do with the mishap.

In his reaction, the Public Relations Officer (PRO) of the ECG, Erasmus Baidoo, said the blame for the incident should be placed squarely at the doorstep of the National Sports Council.

He said there was power supplied by the ECG and that it was a switch on the generator of the Sports Council that developed a fault resulting in the flood light going off.

“There is no reason why there is no power in the stadium except that the generators of the Sports Council developed a problem,” he said.

According to Mr Baidoo, the stadium was running on the generators of the Sports Council and that ECG was only a backup.

If flood lights went off, therefore, he noted, the ECG cannot be held accountable.

His argument was confirmed by reporters at the stadium.

The Black Stars who played one of their finest games in recent times had taken a comfortable lead following a brace by Dominic Adiyia and one goal each by Skipper Sulley Muntari and young Jordan Ayew who rounded up the goalie before slotting into an empty net.

Players of the Black Stars led by Captain Muntari were seen dejected whilst leaving the field after almost 20 minutes of waiting and hoping that the floodlights would shine.

The technical team of the Black Stars, headed by local trainer Kwasi Appiah was also seen downhearted having seen his first day at the job being met by a near-disaster in the form of darkness.

GFA President Kwesi Nyantakyi who seemed baffled about the incident was seen combing the stadium and having discussions with some authorities at the stadium trying to let the lights shine for the game to continue.

Soccer fans in the Garden City that had defied the heavy downpour earlier on the day to throng the stadium in large numbers were seen very disappointed following the incident.

Worlanyo Agrah
Some of the agitated fans that spoke to DAILY GUIDE SPORTS were so angry to the extent that they hurled some unprintable words on the National Sports Council, and extended it to the government.

Kenedy Otchere, a boutique operator at the stadium, said he entered the stadium around 12 noon and he was disappointed that a mistake by someone had ended in disgrace for the country.

He entreated the authorities concerned to crack the whip on any person that would be found culpable.

Grace Yeboah of Adum, an ardent soccer fan, said she would not visit the stadium any longer in the near future, lamenting that what worried her most was the fact that the toil of the Ghana players on the day would have been in vain, had the referee not been considerate.

Kwadwo Awuah aka Corporal, a taxi driver, laid the blame right at the doorsteps of the NSC insisting that they should have tried the lights before the contest.

A 45-year-old man by name Kwadwo Asante, who sounded political, said since the NDC government took over the helm of affairs in the country, Ghana had experienced nothing but disaster and shame, citing the darkness at the stadium as one of them.

He entreated the general public to vote out the President Mills government and replace it with the NPP to restore Ghana onto the path of prosperity in December this year.

Another soccer fan, Yaa Kyerewaah said she had not seen Ghana suffer such shame in her 10 years as a soccer fan, stressing that those at the helm of affairs were not equal to the task.

When the match finally resumed, the Black Stars added three more goals to end the game 7-0.