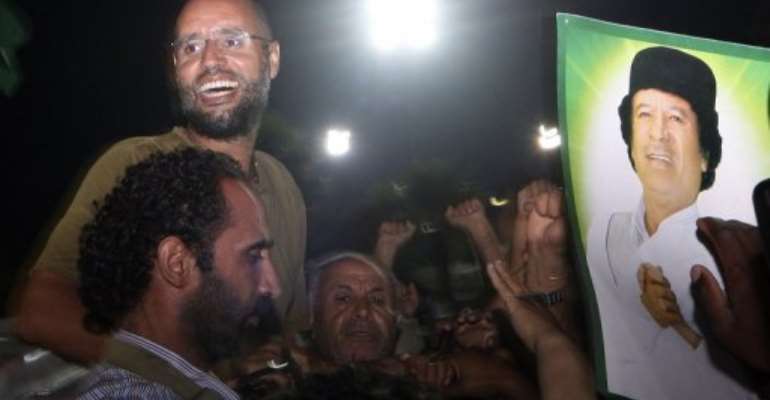 Seif al-Islam Kadhafi, son of Libyan leader Moamer Kadhafi, is surrounded by supporters in Tripoli in 2011. By Imed Lamloum (AFP/POOL/File)

THE HAGUE (AFP) - Libya does not need to hand the son of slain dictator Moamer Kadhafi over to the International Criminal Court while Tripoli contests the court's jurisdiction, ICC officials said Friday.

Tripoli itself wants to try Seif al-Islam, who has been in custody in the town of Zintan, about 180 kilometres (110 miles) southwest of the Libyan capital, since his November 19 arrest.

In a statement, the ICC said Libya could keep Seif pending final determination of the legal challenge.

"Libya must ensure that all necessary measures are taken during the postponement in order to ensure the possibility of an immediate execution of the surrender request should the case be found admissible," the ICC said.

The ICC wants both Seif, 39, and his late father's spymaster, Abdullah Senussi, for crimes against humanity committed while trying to put down last year's bloody revolt.

The ex-rebels holding Seif this week refused to transfer him to Tripoli until they are given months of back pay.

Kadhafi was captured and killed by rebel forces on October 20.