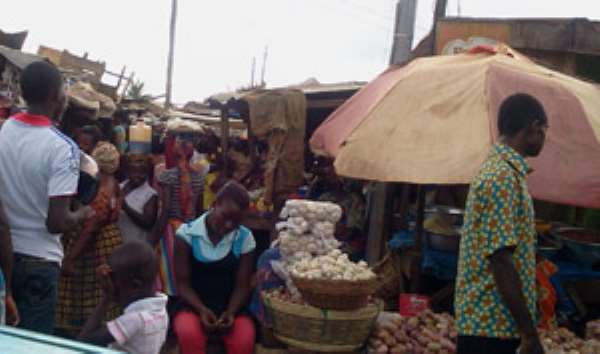 Residents of Sunyani say the much-touted single-digit inflation figures recorded by the Ghana Statistical Service (GSS) over the last three years have not resulted in any positive change in their lives.

Speaking to CITY & BUSINESS GUIDE recently, residents of the area said the single digit inflation figures recorded over the period by the Ghana Statistical Service (GSS) was mere paperwork since they do not impact on the prices of foodstuffs and other products.

According to them, the prices of most goods and services have increased in the municipality over the past nine months, an indication that the inflation figures do not correspond with prices on the market.

It would be recalled that Government Statistician, Dr Philomena Nyarko, in April announced that the monthly inflation figure was 9.1 percent, adding that the Brong Ahafo region registered an inflation rate of 8.8 percent over the period.

However, a visit by the paper to some business centres and shops shortly after the announcement revealed that the prices of food, non-food products and some prices of alcoholic beverages had drastically gone up by between 15 and 50 percent and in some cases almost 100 percent.

At the Sunyani Central Market,  CITY & BUSINESS GUIDE  gathered that a bunch of plantain was being sold between GH¢12 and GH¢20 depending on its weight. However, the price for the same commodity two weeks ago was GH¢6.

Cassava, the cheapest foodstuff on the market, was going for GH¢1 per tuber instead of Gp50.

Five pieces of snail at the market were priced at between GH¢7 and GH¢16.

Traders, whose businesses have been affected by the astronomical increases, told this paper that the development had negatively affected activities in the market.

The prices of electrical, spare parts and home appliances have been increased on the market.

Interacting with this reporter, a spare parts dealer said, 'The economy has been crippled because business is not progressing at all.'

Frank Adjapong, a businessman, on his part, called on GSS to be bold enough and clearly come out with the right inflation figures.

According to him, the current high prices of some essential commodities such as cement, home appliances, rice and other foodstuffs were clear manifestation that government was manipulating the GSS since the inflation figures do not reflect the realities on the ground.