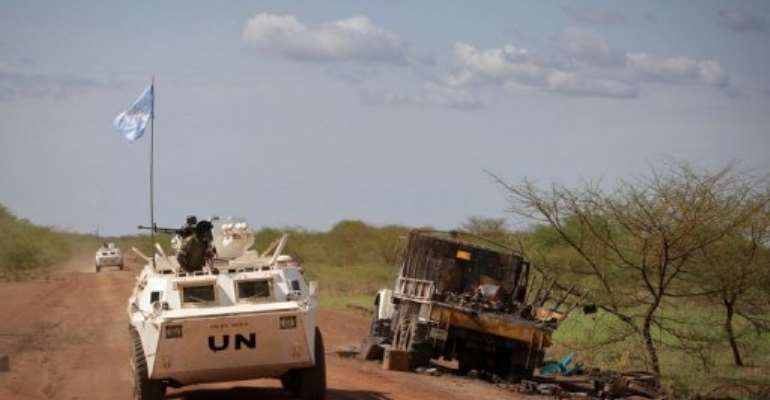 UN peacekeepers drive past a destroyed truck near Abyei. By Stuart Price (AFP/UNIMIS)

KHARTOUM, Sudan (AFP) - Sudan denied on Thursday that armed police remain in the contested border territory of Abyei, after UN chief Ban Ki-moon and South Sudan urged the country to complete its pullout.

Ban welcomed the "full withdrawal" on Tuesday of the Sudan Armed Forces from the Abyei area, a move confirmed by UN peacekeepers there, said UN spokesman Martin Nesirky.

But he "calls on the government of Sudan to withdraw all remaining armed police forces," Nesirky added on Wednesday.

"We didn't have any police at all inside Abyei area, now or in the past," foreign ministry spokesman Al-Obeid Meruh told AFP. "We only have an army, which we have withdrawn. And we are committed to what we have announced."

South Sudan rejected Khartoum's claims to have pulled out from the area, which it partially occupied a year ago.

"We made our position very clear that it was a partial withdrawal; Sudan Armed Forces withdrew their forces leaving two platoons," South Sudan's chief negotiator, Pagan Amum, said in Addis Ababa where the two countries are holding their first talks since coming to the brink of all-out war in April.

"We call on Sudan to withdraw all their forces as they are required by the (UN) resolution," Amum said on Wednesday.

After fighting along the disputed border in March and April, the UN Security Council called on the two sides to cease hostilities and resume talks on a number of issues, including the status of Abyei, the most sensitive matter left unresolved before South Sudan's independence last July.

The council's May 2 resolution said both sides had to pull their forces out of Abyei by May 16. South Sudan complied, withdrawing police who were based there, while Sudan pulled its army out after the deadline.

Abyei was to have held a referendum in January 2011 on whether it belonged with the north or South, but that ballot was stalled over disagreement on who could vote.

After a similar vote, South Sudan separated last July in line with a 2005 peace deal that ended a two-decade civil war that left more than two million people dead.

But critical issues, including Abyei, were unresolved at independence.

On May 17, the UN Security Council made a new demand that Sudan "immediately" withdraw all troops from Abyei, and extended the mandate of the mainly Ethiopian UNISFA peacekeeping force for six more months.

The United Nations says more than 100,000 people remain displaced from Abyei, mostly in Agok in the area's far south, and in South Sudan.