A CALL TO DUTY IN MPOHOR WASSA 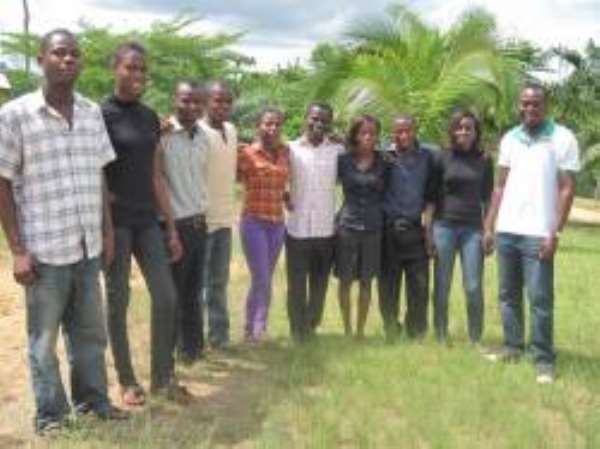 “Though government has an important role to play in meeting the many challenges that remain before us, we are coming to understand that no organization, including government, will fully succeed without the active participation of each of us. Volunteers are vital to enabling this country to live up to the true promise of its heritage.”

Those are the words of former US President Bill Clinton written on the cover page of my diary which I recounted to my colleague Cadbury Cocoa Ambassador Audrey Kareen Gambrah, as our bus drove off from the Kumasi State Transport Company yard through the hectic traffic on the streets of Kumasi on a four hour journey to the Western Regional district of Mpohor Wassa East on Monday May 15 2011. After weeks of scouting, we had finally been able to secure the unpaid services of six colleagues of ours from the Kwame Nkrumah University of Science and Technology to accompany us on a voluntary programme to some cocoa farming communities in the district.

Audrey and I have been making this journey to Mpohor Wassa for the last six months in pursuit of our roles as cocoa ambassadors, and are now conversant with rural life. But as we set off, I wondered; “Bathing without the usual downpour of a shower, drinking water that is at least 37 degree Celsius warm in temperature, the absence of mobile telephony network,” how would our volunteers, some of whom have never spent any days of their lives in a rural community cope?

It was challenging, but despite the difficulties, our volunteers were nothing but fulfilled at the end of our trip. The experience, as they recounted at the end of the voluntary programme was not just enlightening, but one that would play a critical role in forever shaping their future. One of our volunteers, Abigail Adjah, touched by the level of warmth shown by her newly found friends in the rural communities despite the high level of deprivation, pledged she would alter her future career plans to include some years as a rural development worker, maybe, like World Vision Ghana's project facilitator Emmanuel Aboagye Takyi, who has done this job for more than 4 years now. She was not alone in those shoes of hers. Volunteer Dennis Lamptey affirmed that he would not mind returning to the Ekutuase D/A Basic and Junior High School for his one year National Service programme, despite the absence of basic amenities in the communities when he finishes his degree programme in two years time. Another volunteer Patrick Attamah, an Agriculture student in his interaction with the school children gave his word to them that he would in future return to teach them about the basic skills in growing improved cocoa plants like budding and grafting, which they were so happy about.

Several were the activities the volunteers undertook during their stay in the communities, majority of which targeted the school children. Volunteering third year medical student – Rebecca Zutah's talent as a drama director which she never knew she had, became the talk of town in the way she directed a drama starring members of the Future Leaders Cocoa Club at the Dormama Nyamebekyere D/A School on how to prevent cholera. The drama sensitized the students and the populace in the communities about the prevention, symptoms and curative measures of the cholera disease, which earlier this year became an epidemic in several parts of the country.

Using cardboards and other materials, the volunteers prepared 'Teaching Learning Materials' which they used in teaching various subjects like Mathematics and Science in the schools. The school children who were excited about the volunteers' visit encouraged the ambassadors to organize more of such voluntary programmes. They were particularly excited about the quiz competitions the volunteers organized in the schools, for which winners won various prizes. Volunteers Hana Aidoo and Samuel Akomea were full of praise for the smartness and brilliance exhibited by the young people she taught in the Ekutuase and Sekyere Himang basic schools.

As mentioned, the volunteers also facilitated the establishment of the Future Leaders Cocoa Club in the schools. The school children showed great ingenuity in how the contestants for executive positions, some of whom are as young as 12 years delivered perfectly thought through campaign manifestos ahead of the elections, promising leadership that would bring progress to school children. They discussed and adopted a club constitution, and were taught the club pledge, which they recited with so much passion, especially the portion of the pledge which reads: “…….Wide awake to the fact that Cocoa is our wealth, our health and our future. And that Ghana would not be the same with Cocoa.”

The Cadbury Cocoa Ambassadorial Programme is an initiative of the Cadbury Cocoa Partnership, aimed at getting more young people interested in the cocoa industry. Research has shown that the sustainability of the cocoa industry is dominated by aged farmers, creating an endangered future for cocoa production. A situation the ambassadorial programme seeks to address, by encouraging more young people to see cocoa farming as a means of livelihood and actively engaging in it. There are ten (10) cocoa ambassadors who are all tertiary level students operating in the various cocoa district. Two major target audiences of the ambassadorial programme are tertiary level students in the cities, and basic school children in the cocoa communities. The voluntary programme is one of several activities the ambassadors have organized to expose the volunteers to the cocoa industry, and to bring the basic school children into contact with the tertiary level students so they would inspire them to aim for higher education. And then the Future Leaders Cocoa Clubs established in the basic schools seek to draw the attention of the young people to the fact that they have a role to play in the sustenance of the cocoa industry – a role they can play best if they are better educated.